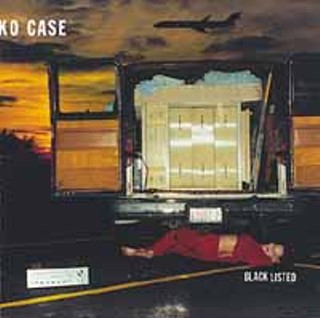 If alt.country ever needed a diva, Neko Case is she. The Chicago-based singer certainly has the vocal prowess, and her magnetic stage persona speaks to both loyal fans and the unconverted. Blacklisted, her third disc, is a sharp turn in many ways, but what remains is that voice. It soars, it swoops, and it conveys an astonishing range of emotions, yet remains unique. Case expands her repertoire by taking on the dual role of songwriter and instrumentalist. Where her songwriting was previously in collaboration, all but three of the disc's 13 tracks are solo compositions. This lends Blacklisted a cohesiveness that her other efforts lacked. With members of the Sadies, Calexico, and Giant Sand lending their considerable talents to the proceedings, Case fashions a mood that comes through in cinemascope. Tunes like the sweeping, hook-filled "Stinging Velvet" and the burning, yearning "I Wish I Was the Moon" are her best songs to date, and her cover of "Runnin' Out of Fools," a tune popularized by Aretha Franklin, is a near-perfect example of country soul. But Blacklisted is one of those albums that needs to be consumed whole. It's not a concept album in any way except mood, but Blacklisted is just the thing for when you're feeling dreary and want to remain that way. Then again, it'll add to a bright sunny day while you're blazing down the highway. A rare record from an extraordinary artist, and one of the year's best.