The ballad of soap creek saloon 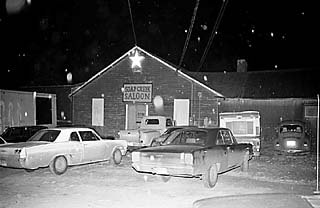 If the Armadillo World Headquarters was the heart of Austin's music community in the early Seventies, Soap Creek Saloon was its soul. The rundown shack of a venue was on what was then a godforsaken stretch of Bee Caves Road, and the rutted dirt trail that led to it was even more notorious. You'd never know it today, looking at the strip malls that line the highway, but it was the scene of many a wild night.

Owners George and Carlyne Majewski doubled as manager and booker, respectively, of the club called "Home of the Stars" as Kerry Awn's posters proclaimed. Austin traditions like the Uranium Savagesí Spamarama, and the George Majewski Lookalike Contest began at Soap Creek, which was roughly the size of two Continental clubs shaped as an "L."

The best memories come as faces and images. Bartenders Lydia, Cecil, and Vennell. A Texas-size doorman named Billy Bob Sanders. The pool tables with Alvin Crow and cartoonist Jaxon hunkered down over pool tables as Austin Sun staffers Bigboy Medlin, Michael Ventura, and Jeff Nightbyrd looked on. The jukebox with Roky Erickson and Cookie & the Cupcakes filed side by side. Posters of past and future gigs lining the rough wood walls in the smoky haze. The Royal Hawaiian Prince in full regalia, sitting on the couch with terminally sagging springs. 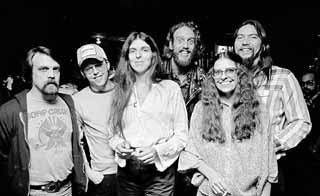 Softball games, birthday parties, wedding receptions (mine), and a ready-made location for movies (Outlaw Blues). Sporadically, someone like Barbara Trout would open the kitchen for nachos, chips and salsa, and other treats suited to the munchie-ridden audience. And if Big Rikke, the Guacamole Queen, was in the ladies' room line, you didn't dare cut in front of her no matter how bad you had to pee. No backstage, only a grassy area outside with bad lighting, perfect for between-set smoking, powdering your nose, or stealing kisses.

We drank Pearl, Lone Star, plain ol' Shiner before there was Bock, and 50-cent tequila when Paul Ray & the Cobras played on Tuesdays; Soap Creek was as crucial to Stevie Ray Vaughan's career as Antone's or the Rome Inn. Country was at its best in those days with Greezy Wheels, the Lost Gonzo Band, Marcia Ball's Freda & the Firedogs, Plum Nelly, Augie Meyers & the Western Head Band, and Alvin Crow & the Pleasant Valley Boys.

Steam Heat and Storm were big weekend draws, and the club cultivated the Lubbock mafia of Joe Ely, Butch Hancock, Jesse Taylor, and the usual suspects. Clifton Chenier and Link Davis made their ways from Louisiana to hold down weekend gigs. Until 1974, the closing time was midnight weeknights and 1am Saturdays. Doug Sahm lived in a house across the parking lot and down the road, hidden by trees and foliage, but close enough for his kids to charge people for "parking."

That was another thing about Soap Creek. It raised a generation of kids, many of whom grew up to be musicians. Shawn and Shandon Sahm, Ian Moore, and the Sexton brothers knew all about stretching out on metal chairs by the tables in the far corner. The Majewskis even raised son Ross and daughter Keri Lynn by the club's neon lights. 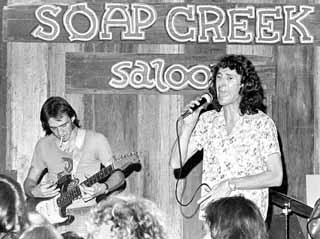 What Soap Creek was best for was dancing. Men in the Seventies still knew old-school couples dancing or could two-step, both of which better suited the music than the freeform calisthenics that passed for dancing in the Sixties. Paul Ray was almost single-handedly responsible for keeping slow dancing alive in Austin when "The Hustle" ruled discos. In 1975, I turned 21 at Soap Creek, dancing the night away.

Soap Creek wasn't the first victim of local suburban development, but a harbinger of club fates to come when it moved to town in the late Seventies. Like Antone's, which also relocated to the north side for a time, the venue tried its luck at the old Skyline Club on North Lamar. The Skyline had a venerable history as a country music venue -- Hank Williams played his last gig there -- so the move worked. For a while.

Parts of Honeysuckle Rose were filmed at the North Lamar incarnation, booking policies expanding to include the burgeoning sounds of punk and New Wave, but progress got the better of that location as well. By 1980, Soap Creek was trying its luck for a third time on South Congress at Academy, where apartments stand today. That worked too. For a while.

The South Congress site continued hosting Spamarama, Savages gigs, benefits, birthdays, and bachelor parties (mine, or rather, Rollo's). It was a good foil to the Continental Club and the nearby Austex Lounge, forming what we jokingly called the "South Austin triple crown." Nevertheless, George and Carlyne opted to give it up and sold it in the mid-Eighties. Soap Creek flowed lightly through a couple more years and dried up forever in 1985.

When old-timers wax nostalgic about Soap Creek, you can bet they're remembering that first location on Bee Caves Road. It wasn't that those days were more innocent -- in many ways the Seventies were just the calm after the Sixties storm -- but the Austin of that era had a charm and sense of community that's revered by many but largely missing today. The reunion poster by Soap Creek artist-in-residence Kerry Awn has the likeness of Doug Sahm with the word "Coach" underneath, an appropriate way to recall the man whose many talents personified Soap Creek's eclectic musical offerings.

Awn's poster also resembles the cover for Sahm's Groover's Paradise album, his quintessential valentine to Austin. Sahm extols our town's virtues in the song, but there's no question what he's singing about are the wasted days and wasted nights of Soap Creek Saloon in the Austin he so loved.