David Allan Coe Still Does Whatever the Hell He Pleases 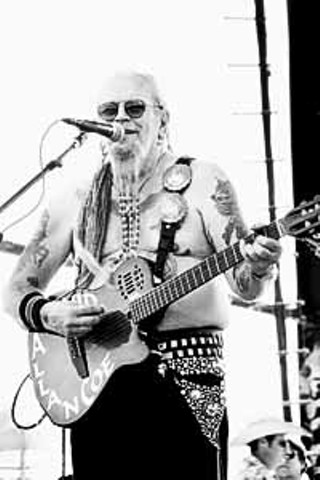 You don't hear the term "outlaw" much these days. Some 25 years removed, it's hard to appreciate how much a ragged crew of long-haired badasses once shook up the country music establishment. In the complacent Seventies, though, Willie Nelson, Waylon Jennings, Merle Haggard, Tompall Glaser, and Jerry Jeff Walker -- as well as second-stringers Townes Van Zandt, Guy Clark, Billy Joe Shaver, and Steve Young -- made country music squarely outside the cozy confines of proper Nashville decorum.

Thanks to the likes of Chet Atkins and producer Owen Bradley, the honky-tonk sound of yore had been watered down to make country more accessible to pop music fans. In fact, "honky-tonk" and "hillbilly" had almost become dirty words; according to Waylon Jennings, "Being an outlaw meant being double-parked on Music Row." The outlaws embraced an ethos of excruciating honesty in every aspect of their music that rubbed Music City countrypolitans the wrong way while making them stars in their own right.

Their songs smacked more of rock & roll and R&B's troublemaking attitude than the schmaltzy radio fodder that was Seventies country. Songs about grief and thrills, love won and lost, and passion and defeat all recalled the days of Hank Williams and Lefty Frizzell, and the outlaw movement rattled the world of country music for years to come. It was the soundtrack to a lifestyle appreciated by hippies, bikers, and freaks, as well as kickers.

Somewhere outside even these outlaws was David Allan Coe, who brought an element of danger and menace that was anathema to country music's powers-that-be at a time when they were trying to mainstream the music. His long hair, rhinestone suit, and the Cadillac hearse he used for touring were all like an upraised middle finger to straitlaced Nashville in the early Seventies. As for his music, Coe got used to hearing country music programmers tell him that his songs were "too country for country radio." Nevertheless, his brand of country music flourished in the real world of honky-tonks and the real lives of the people who went to them.

Thirty-plus years later, Coe has managed to offend nearly as many people as he's won over. He engenders much of the same split opinion as his contemporary, Hank Williams Jr. Love him or hate him, however, there's no getting around his talent. Writing credits for songs like "Take This Job and Shove It" (made famous by fellow ex-con and country pariah Johnny Paycheck), "Please Come to Boston," and "Would You Lay With Me (In a Field of Stone)" are hard to argue with.

Born in the late Thirties in Akron, Ohio -- hometown to Chrissie Hynde and Devo -- Coe spent much of his first three decades in and out of reform schools and penitentiaries, for minor and not-so-minor offenses, including auto theft and armed robbery. Part of Coe's lore has him spending time on death row (for killing an inmate who demanded oral sex) before turning his life around and leaving prison behind for good.

By the late Sixties, Coe had his sights set on Nashville, where he pitched several prison songs to producer and mini-mogul Shelby Singleton, who released them on his SSS label as "Penitentiary Blues" (1968) and "Song for a Harlequin" (1969). Coe took to skulking around outside the Ryman Auditorium (home of that most staid of country institutions, the Grand Ole Opry) in his rhinestone suit, putting his reputation as an outsider in the most literal terms, and helping to cement that reputation early on.

While haunting the bars and nightclubs of Nashville, Coe also fronted an all-black R&B band purported to have included Jimi Hendrix at one time. At the same time, he was also pursuing country music, releasing The Mysterious Rhinestone Cowboy in the early Seventies. His first album to see any sales contained the song that would forever be identified with him: "You Never Even Called Me by My Name," songwriter Steve Goodman's famously wry realization of "the perfect country & western song."

Coe broke a bit further into country radio with "The Ride," the tale of a hitchhiking trip that involved a ride from none other than Mr. Hank Williams himself. Still, his reputation preceded him; Coe found himself shut out of the country establishment, partly by way of his following of bikers, truckers, and other shitkickers, and partly by his refusal to play by anyone's rules but his own. His long hair, tattoos, and ethos still didn't prevent him from putting out more country hits like "Mona Lisa's Lost Her Smile," "Now I Lay Me Down to Cheat," and "Jack Daniels If You Please," and maintaining a rabid following among his fans.

Along with his accolades as a renegade country hero, Coe had his share of trouble along the way. Much of it has centered on two X-rated albums that came out in the early Eighties, Nothing Sacred and Underground. Both albums are filled with sexist, racist, and homophobic songs Coe has tried to live down ever since recording them. Unfortunately, this material is exactly what some people have come to associate the country singer with.

In a handwritten letter on Coe's official Web site, he says, "I was a young man living with a motorcycle club ... I had given up on any commercial success and country radio wouldn't play my songs anyway ... I made these albums for bikers to play at parties ... not everyone appreciates biker humor, even in music. It was never my intention for some little old lady who saw me on TV doing 'Mona Lisa Lost Her Smile' to come to my concert and suffer through a bunch of X-rated songs ... I don't apologize for these albums, because they are very funny, but don't expect me to sing these songs at my shows!"

Making those albums was a decision that has haunted Coe for years. It's undoubtedly the racist content of a couple of the songs that people find the most offensive. Granted, Coe now has an African-American drummer (Kerry Brown, son of bluesman Clarence "Gatemouth" Brown), and got his feet wet with an all-black band in Nashville, but even though he's fallen all over himself trying to rationalize the songs, they've have been the bane of his existence for years, to the point of making him an unwilling (or unwitting) hero for hate groups.

In the December 2000 issue of Country Standard Time, Coe takes on the issue of racism and the songs' origins. His version has him playing those songs for friend and songwriter Shel Silverstein sometime back in the Seventies, and Silverstein talking him into going in the studio and committing them to tape. After being confronted by New York Times scribe Neil Strauss over the X-rated material, Coe claims to have written him, but says Strauss wouldn't acknowledge his rebuttal. "I just told them that they could say whatever they wanted to about me, but they couldn't call me a racist or white supremacist because that wasn't true."

"I see where they're talking about Eminem and his album [The Marshall Mathers LP]. His lyrics are pretty strong in every direction, but he has a No. 1 album. It's cool about his killing his wife in a song, it's cool for all that stuff to go down."

The Coe songs that butt up against the First Amendment, as odious as they may be, force certain questions and issues. They call to mind the way that the Confederate flag (which figures quite a bit into Coe's image) can mean one thing to one group of people and something else to another. They're a reminder that even in this day and age, plenty of Southerners may have African-American friends and co-workers, don't believe in white supremacy or discrimination, and don't ever wish harm on anyone of any race, yet still throw the N-word around freely. Mainly, though, they point out that anyone has the right to say anything they damn well please, as hideous as most of the rest of the public may think it is.

Whether some ill-chosen and ill-advised songs invalidate and outweigh the career of a musician is totally in the eye of the beholder. However, Coe's Web site still offers those CDs for sale; regardless of how hard he's tried to distance himself from them, that fact casts the issue in an unflattering light. "While Coe's conscience might have caught up and left him too ashamed to put his name on the music, it seems to have found room to make money off an album that promotes hatred," wrote The Daily Herald in Everett, Washington.

Coe claims in Country Standard Time that the rights to all his songs, even "Take This Job and Shove It," were sold years ago as part of a bankruptcy settlement, and that his tour manager gives him a stipend from performing on the road. Coe says he doesn't see any income from CD sales at all these days.

Regardless of one's personal opinion of David Allan Coe, one thing is certain: He's always been true to his shitkicking, Harley-riding roots, and to hell with what everyone else might think. At age sixtysomething, none of his outlaw contemporaries are putting out albums with Kid Rock or Pantera (Coe's official Web site even has a memorial to Rock's late sidekick Joe C.). His songs and world-view offer something that would scare the bejesus out of the namby-pamby dilettantes and wannabes that inhabit certain corners of today's alternative-country scene. And Coe doesn't figure on changing anytime soon.