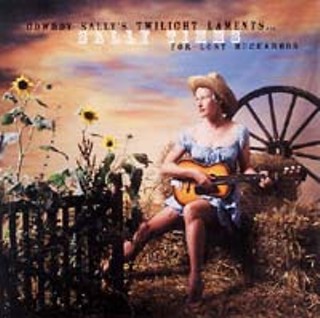 One has to wonder what attracted the members of the Mekons to American country music. Punks from Leeds, England, with a political edge seem like a good stretch from the Grand Ole Opry, and yet they released a couple of well-received country tinged albums in the Eighties. When they moved to Chicago in the early part of this decade, Mekons leader Jon Langford, with the Waco Brothers, and Sally Timms, one of the band's vocalists, began to make music rooted in the sounds of country as it was in the Fifties and Sixties. Cowboy Sally's Twilight Laments is Timms' third full-length recording as a solo artist and only the second available in the U.S. Like her past work, it's a well-polished collection of twang-based songs from a far-flung set of writers including Johnny Cash, Robbie Fulks, Jeff Tweedy, Jill Sobule, Richard Barone, and the Handsome Family. There are also a couple of tunes from the team of Timms and Langford that are intriguing as well. "Dark Sun" is an appropriately murky lament, and "Sweetheart Waltz" is a dreamy bit of fluff; both are led by Timms' airy vocals and some well-placed pedal steel and fiddle that add to the otherworldly feelings they evoke. Timms also lends a decidedly old English air to Fulks' "In Bristol Town One Fine Day." Timms sings as sweetly as Sandy Denny did with Fairport Convention, an interesting cross-channeling of influences, and Cowboy Sally abounds with those kind of sweet sounds. Timms and friends make lullabies and honky-tonk stand side by side, the album becoming warm and inviting, achieving its desired intent in a sly, genuine, and effective manner.