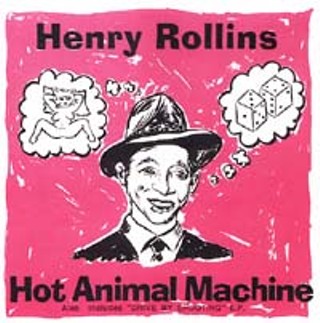 Before Kurt Cobain and Eddie Vedder, ex-Black Flag vocalist Henry Rollins' solo work set the stage for the self-immolation-as-entertainment movement that swept popular culture in the early Nineties. Perhaps this was the appropriate reaction to the tits-and-money aesthetic that ruled mainstream rock in the Eighties, but it would eventually prove to be almost as tedious under the weight of saturation. Part of the problem with Rollins in particular is that his sense of humor seemed to wane with each subsequent release. Take away the humor and all you have is preachy, one-speed hardcore nihilism. That said, Rollins' first solo release, 1987's Hot Animal Machine, may well be the most palatable of his three albums on the Texas Hotel label, all recently reissued on the reincarnated Buddha imprint. Among Machine's highlights is the creepy "There's a Man Outside," which might sound innocuous until you're awakened at 3am by some stranger banging on your door. On the lighter side, Rollins' version of Richard Berry's "Crazy Lover" evokes shades of Screamin' Jay Hawkins. The reissue of Hot Animal Machine also includes the Drive By Shooting EP by alter-ego band "Henrietta Collins and the Wife Beating Child Haters." It's here that Rollins' humorous side really shines through. "Drive By Shooting" is a Beach Boys song gone horribly awry, while "I Have Come to Kill You" uses Queen's "We Will Rock You" to springboard into a nihilistic sequel of Grandmaster Flash's "The Message." Rollins' raging, stream-of-consciousness anger starts to sound obligatory after the first three or four songs on Life Time, the Rollins Band's 1988 debut. The plodding music is subjugated to the vocals instead of working in concert with them, and though Rollins seems to fancy this approach as modern blues, it lacks most of the necessary dynamics. On songs such as "Wreck-Age" and "Gun in Mouth Blues," the band orients itself toward capturing a certain emotional catharsis even if it comes at the expense of the music. Hard Volume, from 1989, refines this idea somewhat. The anthem-quality "Hard" kicks things off at a supercharged shuffle pace, while "Turned Inside Out" is like watching a marathon cockfight between good and evil; in the liner notes for Hard Volume, Rollins writes, "This is not a band that has a good time in the studio." The previously unreleased Live in Australia 1990 (recorded live in the studio at Sydney's Triple J FM) offers aural proof of the band's preference for the stage. Songs such as "Lonely" and a cover of the Pink Fairies' "Do It" are much more captivating live than in their studio incarnations. As if to prove he isn't completely full of rage, Rollins ends his set down under with a scorching version of Cheech & Chong's "Earache My Eye." Although the Rollins Band would go on to be dwarfed by summer shed amphitheaters in the first installment of Lollapalooza in 1991, Live in Australia 1990 is a superb testimonial of the band's ferociousness in a more intimate setting.