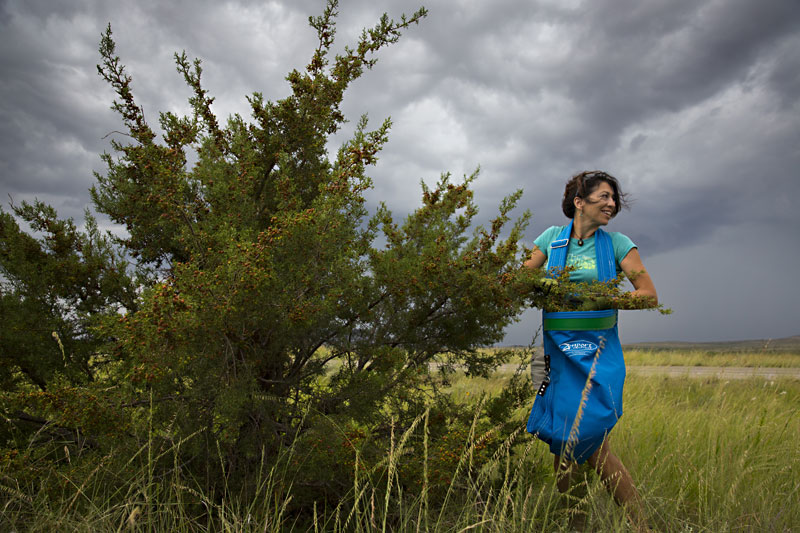 "What a beauty!" Molly Cummings says with a sparkle in her eye.

She could just as easily be referring to the expansive, cloud-mottled West Texas sky or the undulating purple Davis mountains surrounding us. But she's gazing directly up at a juniper tree – one she's named Eve because it was the very first one to give her berries – and she is about to scale the roof of the house right below it to forage some more.

Cummings, a biology professor at UT, is the founder of Austin-based WildGins Co. (wildgins.com), and produces two different varieties of gin (WildBark and WildJune) distilled with juniper berries native to West Texas, which she hunts down and forages by hand.

"If you go to the heart of what makes a gin a gin, it's the juniper, but nearly everybody else is using a common juniper which they get from commercial farms," she explains. "So I saw this as an opportunity to highlight uniquely Texas junipers and really differentiate ourselves in the gin world." 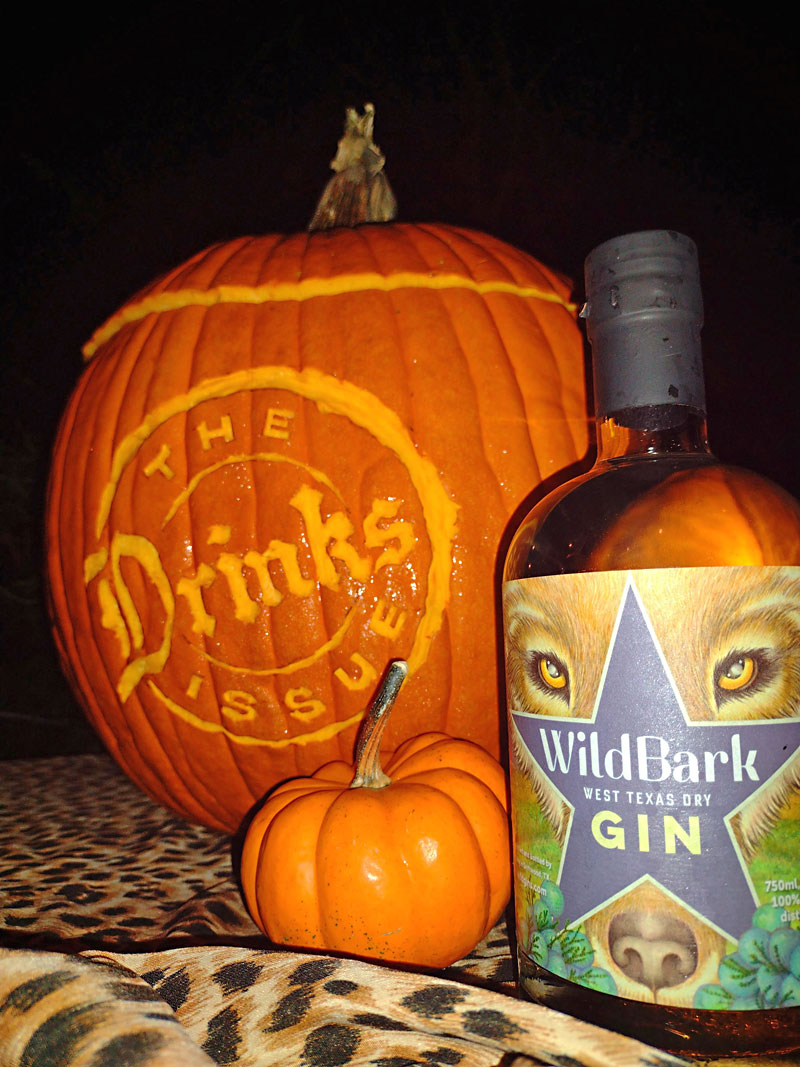 After completing a marine biology program as a Stanford undergrad, Cummings earned a Ph.D.. in ecology, evolution and marine biology at the University of Cali­for­nia Santa Barbara before moving to Austin to teach at UT, where she's been a biology professor for the past 15 years. "What I do now is brain and behavior with my research animals, the fish, so I still go on a hunt for fish," she says. "But my avocation is going on a hunt for juniper berries, so there's still that sense of natural adventure."

Cummings grew up in Wisconsin with five brothers and sisters, who now live all across the U.S. As they watched the craft spirits industry accelerate, they wanted to open a distillery and bar/restaurant in Washington, D.C. But when they realized the ambitious project was much more than they wanted to take on, the siblings switched tracks and decided to work with a distiller to create a craft spirit instead.

Through the years, Cummings had been noticing craft distillers getting creative with the types of botanicals they use to enhance their gins. (For comparison: The Botanist uses 22 botanicals sourced on the island of Islay, Gracias a Dios utilizes 32 botanicals from every state of Mexico, and Ford's Gin sources 11 different botanicals from all over the world.) But juniper is the only one required for a spirit to be classified as gin, and a majority of distilleries use the same species of evergreen conifer known as juniperus communis – because, back when gin was sold as herbal medicine in 16th century Europe, that's what was available.

"Gin originated in the Netherlands," explains Cummings. "In fact, the word gin comes from genever, which means 'juniper' in Dutch. All across mainland Europe and the British Isles, there's only one species of juniper that's non-toxic, and it's called the common juniper."

When a colleague tipped her off to alligator juniper, named for its scalelike bark, Cummings set off to West Texas in search of it.

She started researching uniquely Amer­ican junipers and discovered Texas is home to eight unique varieties of species. She began foraging around Texas and experimenting with different berries, including Austin's own native ash juniper (also known as mountain cedar), which unfortunately did not produce a quality product. But when a colleague tipped her off to alligator juniper, named for its scalelike bark, Cum­mings set off to West Texas in search of it.

When a Fort Davis librarian learned of the search, she invited Cummings to come forage from the tree that would come to be known as Eve. Through word of mouth, other friends and neighbors began offering their bountiful juniper trees, which were otherwise just shedding unused berries.

Now Cummings has hundreds of different trees she forages from all over West Texas, and field notebooks scrawled with notes on all of them. She forages anywhere from 10 to 30 pounds or more from each tree from late July through November, and only harvests from each tree every other year.

"I have my odd-year girls and my even-year girls, so it's very non-invasive and regenerative," says Cummings, who includes the name of the contributing tree on each bottle so consumers can seek out their favorite batches. "And five pounds could produce around 5,000 bottles, so I can do a lot with a single tree." 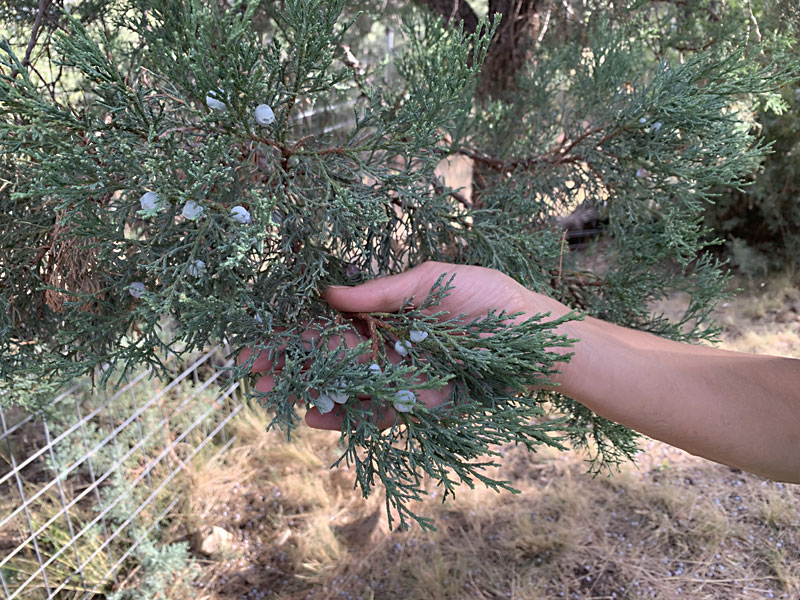 She worked with Houston's Avonak Dis­til­lery, the first certified organic distillery in Texas, to develop a zesty juniper-forward London Dry-style gin called WildBark using the alligator juniper, perfectly showcased in martinis and Gibsons. She also developed a complex western-style gin called WildJune, made using a red berry juniper she discovered growing in lower elevations plus 10 other botanicals (cinnamon and orange peel coming through the most prominently). While most commercial gins start with a generic corn ethanol base, WildGins starts with an 80% rye and 20% malted barley grain neutral spirit for a smoother mouthfeel.

Unfortunately, Cummings spent all of 2019 awaiting FDA approval for her two products (the process took especially long since no one had ever made a spirit using these wild-foraged juniper varieties before) and the gin was released just a week before Austin went into lockdown. As she found herself with more time to dive deeper into research, she learned that junipers have two different antiviral compounds, and lemon balm (which appears in the WildJune) is also known to be antiviral.

"You're going to get a hint of those compounds when you drink a gin, but the real way to extract them is by letting them sit in alcohol for a good chunk of time," explains Cummings, who used these herbs to create a bright, tealike tincture intended to enhance cocktails made with her WildGins products.

Now that bars and restaurants are bustling with life again, and tastings and samplings have returned, Cummings has seen a surge of interest in WildGins, particularly from local bartenders: Nightcap, Parkside, Antone's, The Beer Plant, Vespaio, ATX Cocina, and The Golden Goose all highlight her gins in specialty cocktails.

While Cummings already knows that not all eight indigenous Texas junipers will be fit for making gin, she does want to continue to seek out and experiment with other species. You might say she's caught ... the juniper bug?

"I would love to do seasonal small batch varieties focusing on even more unusual and rare Texas junipers and have profits from that go back to land conservation practices for West Texas," says Cummings. "That would be my ultimate goal because it is so beautiful out there and the rugged frontier, the natural wild world out there, gives so much to me and my spirit. I'd love for our gin company to be able to give back to it."