Kareem El-Ghayesh Brings a Taste of Egypt to Texas Barbecue 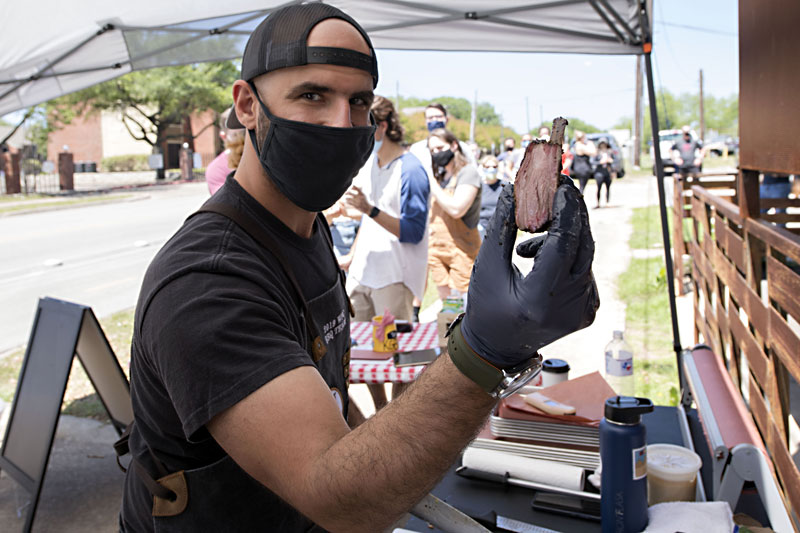 Kareem El-Ghayesh shows off a cut of brisket at KG BBQ's monthly pop-up, outside Dia's Market (Photo by John Anderson)

Many people describe their introductory Texas barbecue experience as "life-changing," but few have the receipts to show for it. For Kareem El-Ghayesh, however, that first bite of brisket spurred a move across the globe that set him on an entirely new career path.

"I was literally blown away by the experience," remembers El-Ghayesh. "Barbecue is one of the most amazing cuisines because it's very simple: It's live fire, meats, salt, pepper. You can take this and go so many directions."

El-Ghayesh grew up in Cairo and came to the U.S. for the first time in 2012 to visit his uncle, who'd moved to Cincinnati; he also flew down to Austin to visit an Egyptian friend who'd moved here. El-Ghayesh was so taken by his first humble tray of barbecue that he returned to Egypt and began practicing at home using a Weber grill, Franklin Barbecue's A Meat-Smoking Manifesto, and instructional YouTube videos.

He also befriended Cairo butchers and practiced techniques with them while sourcing his meat. El-Ghayesh grew up watching both his grandmother and mother cook, eventually helping his mom make traditional Egyptian dishes like lamb shank in tomato sauce, stewed okra, roasted duck, and desserts like baklava and kanafeh. But Texas barbecue was completely new territory.

"We love beef in Egypt, especially tenderloin, but all the barbecue is so different from here. It's just skewering things and grilling over live charcoal," says El-Ghayesh, who had a hard time even finding brisket, a cut mainly ground for burgers. Despite the differences, he drew comparisons between the two cuisines. "In the Middle East, we always have a centerpiece and we surround it with all these beautiful, colorful vibrant pickles, sauces, and condiments. Nothing is better than brisket, and it goes so well with all the flavors of the condiments that we use."

El-Ghayesh graduated Cairo University with a business degree, and was growing increasingly discontent in his corporate finance career. While entertaining the idea of starting a food business in Egypt, he was met with doubt and disapproval from friends and family who couldn't believe he would leave behind a stable, respectable job to take a leap into the unknown. But leap he did. In 2015, he saved up vacation time for a monthlong deep-dive into the world of barbecue via Austin.

"Learning from people here, the real masters, seemed like the legit way," says El-Ghayesh. "It's like learning basketball from LeBron James. You're learning from the people who are immersed in it, and doing it successfully."

During his visit, El-Ghayesh met Aaron Franklin, who was speaking about his cookbook at the Texas Book Festival that year. El-Ghayesh ate barbecue all over the city, connecting with as many owners as possible and asking a few to teach him their craft so he could bring Texas barbecue to Egypt. Initially met with some rejection from more guarded pitmasters, Bill Kerlin whole-heartedly encouraged him to come work and learn at Kerlin BBQ (www.kerlinbbq.com). El-Ghayesh returned to Egypt, quit his job, and packed his bags.

"Every single pitmaster, or mentor as I like to call them, taught me something different," he says. "Kerlin taught me the basics. He's a really good pitmaster; he does everything traditionally. He knows what he's doing with fire and wood, meat and smokers. So he really gave me the fundamentals and a great introduction and a push into the world."

“In the Middle East, we always have a centerpiece and we surround it with all these beautiful, colorful vibrant pickles, sauces, and condiments. Nothing is better than brisket, and it goes so well with all the flavors of the condiments that we use.” – Kareem El-Ghayesh

The barbecue student went on to work at Valentina's Tex-Mex BBQ under pitmaster Miguel Vidal. It was a 3pm-3am shift five days a week in a nonstop whirlwind environment – prepping vegetables and salsas, tending fires, watching briskets, running food. At the same time, he was pursuing an Austin Community College advanced-track culinary degree to ensure he could build upon a strong academic foundation. These two experiences together helped him begin the Egyptian/Texan concept that would become known as KG BBQ.

"I would say that the inspiration came from Miguel, seeing this fusion happening firsthand, and seeing that it really works," says El-Ghayesh. "He's so dedicated and so proud of his culture and food. He loves barbecue and puts a spin on it that way. My cooking style is also very influenced by him." In fact, the first time El-Ghayesh tasted a homemade tortilla, it reminded him of an Egyptian country-style pressed bread called garadee.

"It's a little richer, but the char on the tortilla and the buttery taste took me right back," says El-Ghayesh. "If this worked really well with barbecue, I started thinking of the flavors of the food I ate and I started pairing things in my head."

After Valentina's, El-Ghayesh continued to gain experience at a number of other places, including brief stints at Freedmen's, Rollin Smoke BBQ, and Interstellar BBQ. There was also a year and a half of line-cooking at Lamberts, a glimpse into the meat processing industry at Lone Star Meats, and a role at Salt & Time to learn butchery and sausage-making. All this time, he was pursuing his own projects too. He started his first barbecue pop-up at South Austin honky-tonk Giddy Ups in 2017, initially serving traditional Texas barbecue, like brisket. His catering business and private cooking classes were ramping up when Dia's Market (812 Justin Lane) asked him to cook for their anniversary party that June. His food was so well-received that it developed into the current KG BBQ pop-up on the last Sunday every month.

April's pop-up had people lined up down the block. On the menu was za'atar and pomegranate pork ribs, lamb-bacon ribs with mint-serrano chimichurri, and chicken sausage with sundried tomatoes, green olives, and feta. Another big hit? Brisket, of course, served in Egyptian rice bowls sprinkled with pine nuts, pistachios, golden raisins, and a drizzle of tahini. And as real Texas barbecue lovers know, the sides can set apart a business. KG BBQ's unique sides include Lebanese buttermilk fattoush, house-made pickles, and beet-dyed "pink potato salad" – all splashes of brightness to each colorful tray.

"I think the diversity of the market here cultivates this environment where people are seeking new experiences with barbecue," says El-Ghayesh.

Last summer, he developed a supper club to share his Egyptian food and culture in a more intimate setting, and he plans to continue these experiences (with the addition of live Middle Eastern music and a belly dancer) once he finds the perfect venue. But right now, he's focused on finalizing his plans to launch a food truck at Dia's Market before 2022, with a brick-and-mortar to follow.

What does his family think of his well-deserved success? "They're very, very proud," El-Ghayesh says, adding that he can't wait to finally see them again in Egypt this summer after two years apart. But he'll have to come prepared.

"I can't walk into the house without showing that I have a brisket with me," he says with a huge smile. "That's what they expect of me now."