Six food trucks prove to be more than arepas It's early in the week on a blazing summer day in COVID-era Austin, and the Burnet Road food truck park has never been quieter. Only half the trailers are open (the others will lift their windows later that night) and the playscape stands as a stoic reminder of more carefree days past (and hopefully to come). But at the south end of the lot, Budare's is buzzing with activity. Owner Carmen Rojas is simultaneously turning arepas on the sizzling griddle, taking an order over the phone through her mask, and completing a transaction with a driver who just pulled up.

“Arepas are the tacos of Venezuela, and we want more people to know the food and see it as an everyday meal like we do in Venezuela.” – Andrea Rincones, Budare’s

A pandemic was likely not taken into consideration when Rojas was building her business plan, but she is no stranger to adaptation, molding Budare's through the years to fit her lifestyle and consumer demand. The idea was born in Philadelphia after Rojas earned a degree in architectural studies and ran her own interior design firm in Mexico for 30 years, but she always intended to open a Venezuelan food concept based on her mother and aunt's recipes from Caracas, Valencia, and Maracaibo.

That dream came to fruition in 2011, when she moved to Austin to be closer to her children. Rojas and her daughter Andrea Rincones opened Budare's, a Rainey Street truck named after the round griddle used to cook arepas, which evolved from the slices of stone originally used by Venezuela's indigenous Cumanagoto people.

Austin's first Venezuelan food concept was a hit with barcrawlers, who lined up to customize arepas stuffed with fillings and pick up orders of handmade tequeños – cheese sticks wrapped in homemade pastry dough and fried to crispy perfection. ("In Venezuela, there is a saying that there is no party without tequeños," Rojas declares.)

"But I wanted people to remember what they were eating and on Rainey Street, people are drinking a lot and eating just ... because," says Rojas. "So it was very hard to keep up that relation with my customers."

When the property owner decided to sell two years later, the mother-daughter operation catered private events until finding their home at 5000 Burnet in 2016. Now they maintain a community of regulars who visit Budare's for the naturally gluten-free arepas, griddled corn pockets stuffed with a mix of fresh sautéed veggies or proteins like carne mechada (pulled beef), reina pepiada (creamy chicken-avocado salad), and pollo mechado (pulled chicken). Side note: The abundance of plant-based toppings used in Venezuelan cuisine means any dish can easily and deliciously be made vegetarian or vegan.

"Arepas are the tacos of Venezuela and we want more people to know the food and see it as an everyday meal like we do in Venezuela," says Rincones.

"My customers are not mostly Venezuelan, which is very interesting – they come from all over," says Rojas. "But Venezuelans come for the cachapas and the tequeños because it's very common to make your own arepa at home."

Austin's Venezuelan population is undoubtedly rising, as more than 4.8 million people have fled political crises and economic meltdown in their home country since 2015, and thousands of those immigrants have sought asylum in the U.S.

Pedro Elias Barrientos attributes the rise in popularity of Venezuelan cuisine, at least in part, to this migration. He opened Four Brothers ATX with his mom, Azalia Mar­tin­ez, and three siblings in winter of 2015. Now they operate three different trailers across the city, featuring traditional arepas, empanadas, tequeños, and patacones (plantain sandwiches), plus their own creations like gluten-free bowls, breakfast empanadas, and "loaded" yucca fries topped with cheese, garlic sauce, and avocado sauce.

Barrientos and his siblings were born in Maracaibo and grew up in Caracas, where their mother cooked using her mother's recipes. Martinez was a journalist in Venezuela but all four of her kids worked in restaurants while living there. Once the family relocated to Austin, they joined their studies and experiences in business management, graphic design, accounting, and restaurant management to bring Martinez's revered cooking to our city.

Ramon Sanchez experienced a similar career change from communications to food service. Born and raised in Venezuela, his background was in journalism, marketing, and advertising, and he was a college professor for five years before owning and operating a bar/restaurant in his native Barquisimeto. He moved to town two years ago and worked in a barbecue truck and a Mexican restaurant, which helped him understand food truck operations and stateside restaurant management in the U.S.

Last April, he opened Pepito's 512 in East Austin's Pangea Lounge food trailer park. (Before COVID, you'd easily locate it by the hammock grove in the front, then follow the festive music past the fire pit and back to the Pepito's truck to order.) Unlike the other Venezuelan operations around town, Pepi­to's specializes in the country's street food. 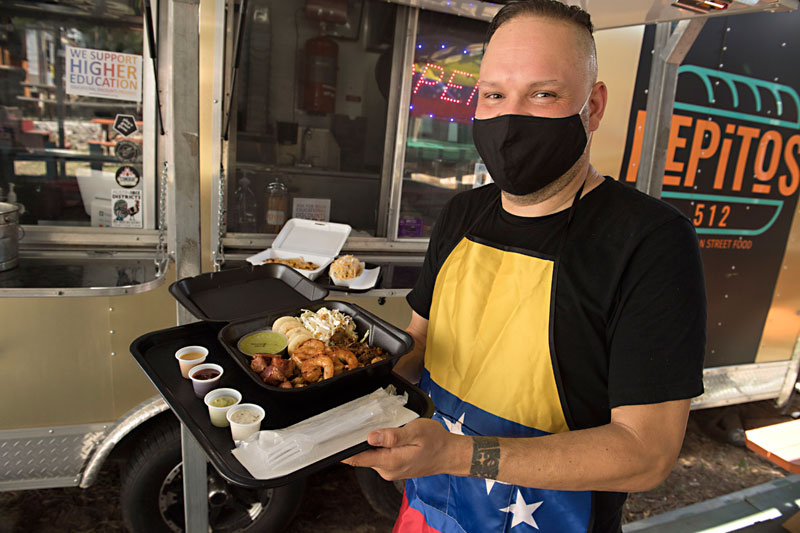 Ramon Sanchez of Pepitos 512 (Photo by John Anderson)
“The cultural melting pot present in Venezuelan food is a huge advantage for my country’s cuisine, Being simple but insanely flavorful is definitely what makes our food appealing.” – Ramon Sanchez, Pepito’s 512

"Most of the other Venezuelan food trucks in Austin are specialized in homemade food," explains Sanchez. "But our food is closest to what you actually find in Venezuela's food trucks, so stuffed arepas and pabellón, Venezuela's national dish, are nowhere to be found in our menu."

"At first, our main customers were pretty much the Venezuelan diaspora, but now I can say that over 75-80 percent of our customers are locals," says Sanchez. "People ask about some of the most popular dishes from Venezuelan cuisine and know our sauces by name."

Sanchez rotates through 14 different sauces he's developed, but the guasacaca and barbecue sauce are always available, as is his crowd-pleasing Candela hot sauce, a mix of ají picante and ají dulce (Venezuela's national peppers), habaneros, hickory­-smoked serranos, garlic, and cilantro. "The cultural melting pot present in Venezuelan food is a huge advantage for my country's cuisine," Sanchez explains. "Being simple but insanely flavorful is definitely what makes our food appealing to our customers ... so you can see Venezuelan food truck newcomers opening throughout the city."

"There's a growing trend of Venezuelan food getting to Austin's palates because we've seen how the Latin community has continued developing and, within it, the Venezuelan community," says Davila. "At the same time, our food is similar to the one you can find in countries like Colombia or Puerto Rico. People are relating more and more to it."

Rojas and her daughter may have been the first to open, but they are grateful for each of these family-owned Venezuelan operations, as each one helps grow exposure to their country's cuisine. "I will say competition is great for me," says Rojas. "It's nothing that will ever be against me. Because the more there are, the better we will be known!"

Both Rojas and Sanchez were looking for brick-and-mortar locations when the pandemic hit, and both hope to be able to open restaurants in the future. But for now, Rojas is looking toward cooler days when she'll start making hallacas, massive tamales wrapped in plantain leaves and stuffed with meat. She begins taking orders in October and makes them until the new year. This Mesoamerican holiday treat takes four days and many steps to prepare, so assembly is most efficient with a team of friends and family – plus plenty of drinks and music, she adds.

"I hope we can open a restaurant so people can actually see us preparing them," says Sanchez. "I want to let people know how we celebrate in Venezuela."

A version of this article appeared in print on July 17, 2020 with the headline: More Than Arepas