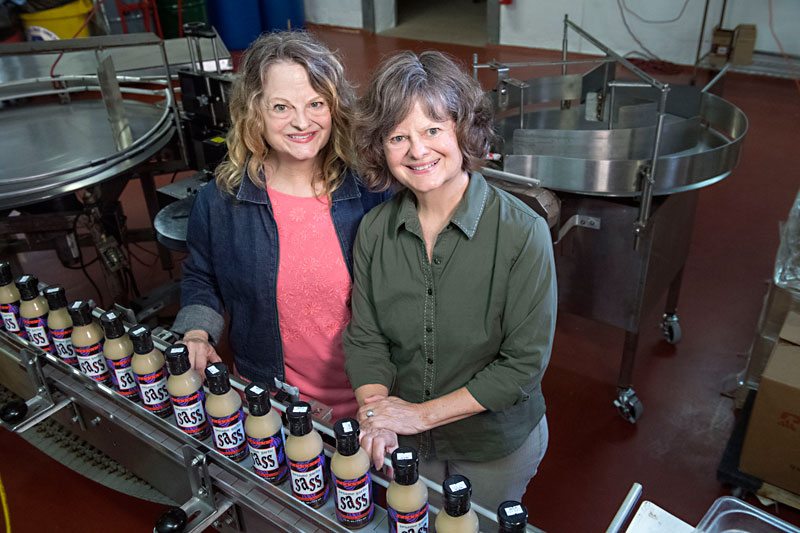 At 10:30am on a Wednesday morning, the new SASS Dressing and Sauces kitchen was quiet – and hot. The air conditioning in the new building was broken, the latest thing to go wrong in the nine long months since the business lost its lease, halted production, and moved into a new space. In that time, twin sisters and co-owners Lauri and Carol Raymond have had to renovate, negotiate with landlords, and rebuild relationships with buyers and vendors from scratch. This July, they received their first order since October 2018: 600 cases of dressing for H-E-B. "It's not like starting over," Carol said. "It is starting over."

SASS (Season All Stuff Sauce) was born in Austin 31 years ago, the same year as Lauri's son Zane, who now works at the business. The sisters started with one salad dressing flavor, sesame garlic, which remains a favorite today. "I think food was kind of in our DNA," Lauri said. "Mom was a great cook, and she cooked three meals a day for seven people for decades."

As the sisters built their business – and now, as they fight to keep it – their own mother's ingenuity is an ongoing source of inspiration. "You know how they say necessity is the mother of invention? We always say the mother of invention is a mother," Lauri said. "Because it is necessity. But it's also women. Women figure things out. Moms figure things out. Because we have to."

Over the years, the sisters went from hand-mixing and hand-filling every bottle themselves to running a company with a dozen employees. Then a new landlord bought their building, with plans to convert the space into an upscale office complex, and everything changed. "It did feel like it was eventually going to happen," Lauri said. "I was prepared somewhat because it was happening to a lot of businesses in town, and I knew that we had been getting a great deal for many years on our rent."

It's a familiar story in Austin by now, but the sisters were still shocked when it finally happened to them: Their rent went up 350%.

On Halloween, they vacated their previous kitchen and moved to a new location on Todd Lane, where they now sublease from Independence Brewery. Leaving Austin, they said, was never an option. "It was either start up again here or, I don't know, get it bought or something by somebody else," Lauri said. "My mom lives next door to me, and I'm on the board of my church. I didn't want to move out of town or spend my life driving back and forth."

The sisters didn't expect to be out of production for long, but the complications of moving stacked up, and the kitchen stayed quiet for nine months. "People don't even know what happened to us," Lauri said. "We've gotten a lot of calls and letters and phone calls and emails and everything like, 'What the heck's going on?'"

This is what's going on: Real estate development in Austin is turning decades-old family businesses into cash-strapped start-ups. When they lost their lease, the Raymond sisters were transitioning to GMO-free products and estimate they spent $30,000 getting four dressing flavors certified before production ground to a halt. And they had just invested almost $100,000 in a new filler to update their aging machinery. The filler has been sitting in pieces in the back corner of their new location for months, and the sisters aren't sure when they'll be able to install it.

Those investments, compounded with the costs of moving and the loss of production, left SASS sunk in debt. They laid off their employees – most of whom had been with the company for more than a decade – and missed payments to ingredient vendors. "For us it's really day-to-day and moment-to-moment, and it can be terrifying, really terrifying," Lauri said. "Both of us have experienced the fear and anxiety that comes from trying to do this thing. Full body shakes – wake up in the middle of the night and your whole body starts to shake."

The sisters turned to their community for support: A GoFundMe page, titled "Help SASS Stay in Austin," has raised about $14,700 since March, and an appeal video they posted on Vimeo has been viewed more than 100 times. They've also been working with the city to get a small business loan. Xavier Zarate, the Raymonds' primary contact in the city of Austin's Economic Development Department, told the Chronicle in an email that affordability for local businesses is a major concern for the city: "Displacement and gentrification are functions of a larger and more complex issue of affordability. A sustainable community and healthy economy should include diversity of real estate, while providing resources to assist small businesses." Zarate also noted that "Economic Affordability and Opportunity" is one of six priorities listed in the city manager's Strategic Direction 2023 plan. 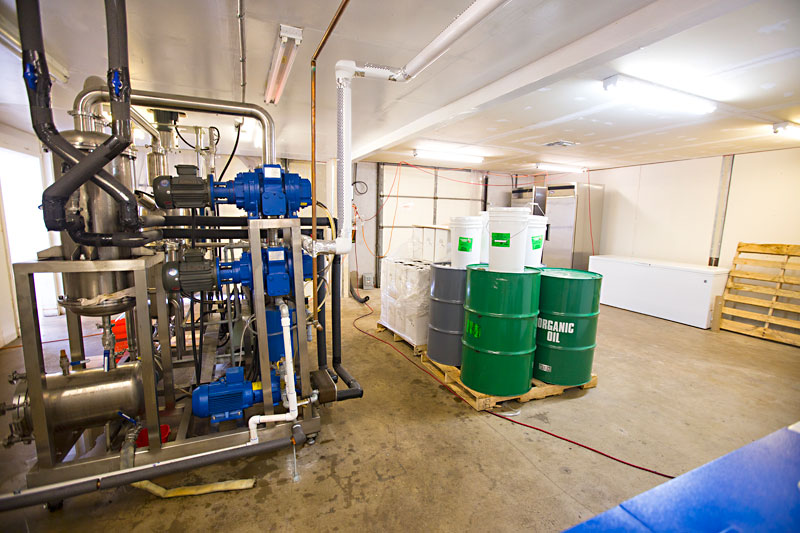 "Businesses, like people, are unique in their respective needs," Zarate said. "Some need loans to expand operations and some need training to shore up basic business practices. Because affordability is a function of many variables, I think the possible solution will be developing a mix of approaches that meets the individual need of the business."

Carol has also been learning about how to acquire venture capital funding for SASS, which is a first for the company. "It's a learning curve for us," Carol said. "We've never ever thought that we would go outside and expand ownership until now." But, she said, it's necessary not only to get the company back on its feet, but to help it grow.

For now, every dollar is keeping SASS afloat day to day. The check from that very first sale to H-E-B since the move allowed them to pay their old employees again and buy ingredients for the next order. It's the nerve-racking, precarious work of building a company from scratch, made all the more frustrating by the fact that a year ago, SASS was well-established and thriving. "Here's what makes it hard," Lauri said, tapping her temple. "My voice that says it shouldn't be like this."

That's a familiar feeling in Austin, as more and more beloved local businesses are forced to move or shut down entirely – the nagging discomfort that it shouldn't be like this. For the SASS sisters, the answer will always be about building relationships. Even though they're barely back on their feet and still have a long road to recovery ahead, they plan to partner with new up-and-coming businesses that need a leg up.

"The food community needs to have a sense of teamwork and working together to try and make sure that Austin stays a good place for [food businesses]," Lauri said. "If you want to make that leap between the farmers' market and the next level of business you need some help, and ideally that's what we would be able to provide."

They also hope that future public-private partnerships could prevent more stories like theirs. Carol is already thinking about innovative solutions, like founding business co-ops or leasing land from the city. After all, SASS is a family business with a family ethos, and the twins are confident that the key to strength is building and growing a tightly knit community. And it comes back to the first word on every bottle: sisters.

"I've had many times when I've wanted to just be sisters and not be business partners; to be able to just have Thanksgiving together and not have this whole thing of the business," Lauri said. "But then, in my more rational moments and in my more faithful moments, I can see that everything that has transpired is just right for unfolding our relationship and for the business as well."

By the end of the interview, the air conditioning was working again.