I fell in love with a cup of hot corn 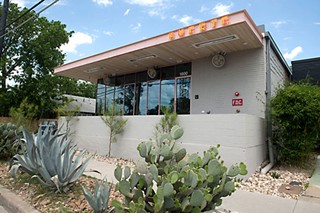 It's rare in this gig, especially in this town, to eat something so delicious that one bite overshadows all other food, and it's even more rare when it's a corn-based appetizer. The sweet corn esquites con fontina at Suerte was that something for me. (It also inspired a self-imposed moratorium on eating anything but that dish, ad infinitum, but for obvious reasons I relented.) Their twist on Mexican street corn salad, or off-the-cob elotes, is served piping hot in a custom-blown glass filled with grilled sweet corn, foamed fontina cheese, pulpy lime bits, and crispy heirloom corn tortillas crafted from house-made masa. This dish embodies the way a three-month-old restaurant on East Sixth street is mastering the art of elevated simplicity. Suerte has a thing for corn, and apparently, so do I. 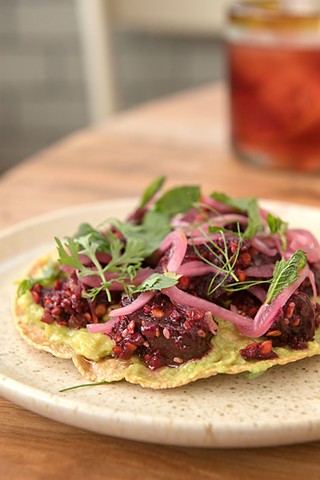 When owner Sam Hellmann-Mass, a founding partner of Barley Swine and Odd Duck with a deep love for Oaxaca, struck out solo, he had his sights set. Suerte is dedicated to honoring Oaxacan cuisine, one full of ancient preparations, while utilizing the bounty of Central Texas ingredients and serving it all in a modern Austin space. He brought on executive chef Fermín Núñez (formerly of Uchiko, L'oca d'oro, and Launderette), who grew up in Torreón, in north-central Mexico, and South Texas, to design a menu with that vision in mind. The balance between earthy masa-laden dishes and fresh raw offerings makes a perfect meal when they're allowed to work in tandem. Basically, be sure to order from every section of the menu. 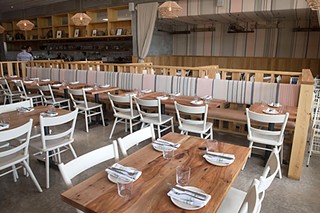 The space, formerly the restaurant Dario's, which closed in 2014, is lovely and bright and filled with curated treasures from Hellmann-Mass' travels through Mexico. Local artist Aaron Michalovic designed the huge vibrant custom front door (which boasts a very cool locally made and one-of-a-kind lock), and a simple statement on the adjacent window catches your eye as you walk in: "No guns, Be cool, Have fun." Old Mexican cookbooks (plus one Jeff Smith Frugal Gourmet bonus book) adorn the host stand, and the kitchen opens to the left, with enough visual to intrigue, but not distract. The large room is decorated with light-colored wood and handwoven pale pink and gray patterned textiles from a street artist Hellmann-Mass met in Oaxaca, and it balances fairly communal seating with standard two- and four-tops. A line of woven light fixtures counter the bold steel-framed art lighting made from upcycled mezcal jugs in the corner, and fresh flowers are everywhere. The wall of brick is the only structural reminder of the former space, and the new huge windows open up (once the summer sauna has passed). The long bar has (very) heavy wooden and steel stools, and above, in a series of shelves, sit time-honored tools and a few simple tchotchkes. (Check out the bathrooms for a burst of color and trippy wallpaper excitement.) 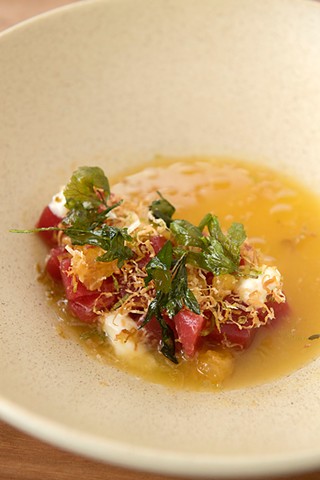 Aesthetically, it's an absolutely beautiful restaurant. The only hiccup in Suerte's dining room is the deafening sound of a Friday night full house. Complimentary valet service eased the parking woes, and I was thrilled to find out the place was packed but that there was no wait, but intimate conversation had to wait. Still, the service – and this is something I cannot reiterate enough – was impeccable on both of my visits. Really: Those servers and bartenders are some of the best in the city. The drink program is mezcal-heavy, but also features corn whiskey, local sotol and tequila and beers – including a custom Hops & Grain brew. The Federale, a twist on an Old Fashioned, was boozy and settled my dining companion's nerves, while my rose water and mezcal Rosalinda did the same for me. The menu changes often, sometimes just an ingredient or two, and that night's ceviche was striped bass served in green tomato broth with cucumbers and chile arbol. I certainly wished for more of that bright and tangy goodness, but such is the case with really great small plates. 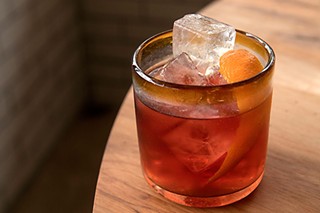 Back to the corn. Suerte sources heirloom white and Bloody Butcher corn from Barton Springs Mill, and the kitchen, under the guidance of Núñez, processes the corn. It goes through nixtamalization, where the corn is soaked and cooked in an alkaline solution, then the altered-state corn is hulled and ground into dough with a molino to make masa – the staple of tostadas, tamales, tlacoyos, tlayudas, and of course, tortillas. Just as in Oaxacan fare, it's the backbone of Suerte's menu. Or maybe it's a musician who excels in the use of restraint because they're just really that good. (I'm talking about the 2002 live version of "Perfect Day" with Lou Reed and Luciano Pavarotti at a benefit for Angola. If you haven't seen it, get thee to YouTube.) My favorite dishes with the star of the show were the beet tostada with smashed avocado, peanut walnut yum yum sauce, and pickled onions, and the current taco special, the suadero tacos with tender confit brisket, black magic oil, and avocado salsa cruda. A glutton for punishment, we also ordered the mole carrots and the goat barbacoa, served with ramekins of charred shishito salsa, queso fresco, sungold pico, and escabeche-style green bean bits. I had to be rolled out of the restaurant, making my wish for more food completely laughable. We ate that goat for two more days.

My next visit was during happy hour on a Wednesday, so now we can talk about that corn again. Lucky Hour runs 5-6pm every day, and initially I thought, "Who has a one-hour happy hour?" but after tasting that Don Dario margarita, only $6 in this window, I realized it's really for our benefit. Not only does it just look cool, in one of those heavy-bottomed custom glasses that's just as artsy as it is functional, the blanco tequila pairs perfectly with tamarindo, sarsaparilla, and lime, and really kicks your afternoon into high gear. It's a casual vibe at that hour, but the service was still warm and exactly on-point. At one point, my cloth napkin fell and before I could hop down from my, again, really heavy barstool, it was already scooped up and replaced. Toward the end of the hour, the dinner-diners arrived, and that vocal volume went to eleven. Regardless, the "snackcidents" are $5 – including that show-stopping cup of corn. The only dish I felt like I wouldn't date again was the aguachiles, royal red prawns in a cascabel chili broth with tostadas, largely due to the blandness of the flesh, but other breakout performances like the chicken tamal and the duck egg flan really sold me. (Personal bonus: Pineapple, my Kryptonite, will never appear on the menu because it doesn't grow in Central Texas.)

Overall, is Suerte pricey? Yes, it is, save for that magical six-finger discount hour, but I'd highly suggest paying this place a visit. Just a perfect day: Drink Don Darios and eat corn at the bar, and then later, when it gets dark, we go home.