Where to get your gose around town 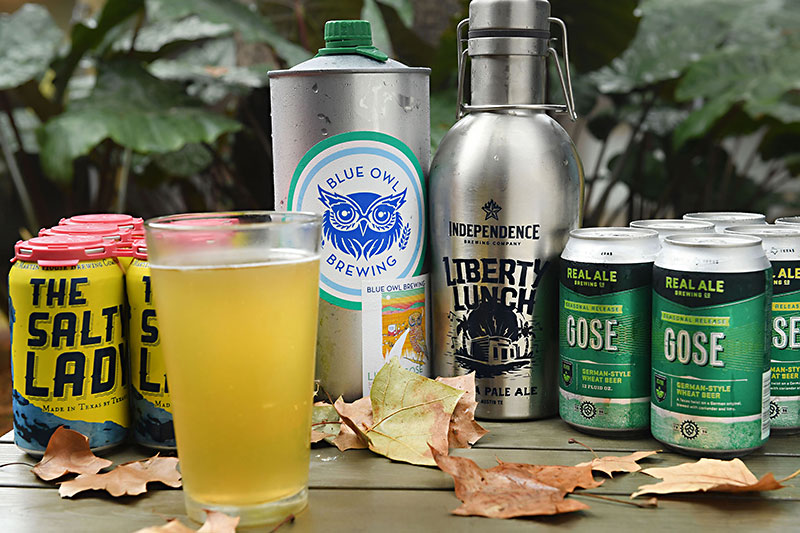 Some craft beer enthusiasts will argue that the gose ("GO-zuh") – a sour and salty brew originating in 16th century Goslar, Germany – is once again gaining popularity merely because of its obscurity. Why would anyone intentionally inoculate beer with bacteria, souring the flavor, and then add salt? Our Socratic response: Do you lick every last grain of salt off the rim of your margarita? Do you ask for three extra limes in your vodka tonic? Do you feel that no floating trip is complete without Twang? If so, the highly sessionable gose just might be your new favorite beverage, and 10 Texas breweries are offering their interpretations.

4.6% ABV, Independence Brewing Co. (Austin)
Peach purée gives this brew inspired by Ode Brewing in El Paso a subtle fruit flavor, and Himalayan pink sea salt keeps it true to style. Head to the South Austin taproom for a taste, or look for it at Whip In and Spokesman Coffee.

That Gose for All Y'all

3.7% ABV, Infamous Brewing Co. (Austin)
Spend the day on Lake Travis and then head to the Hudson Bend taproom to hydrate with this mildly sour, moderately salty concoction.

4.5% ABV, Jester King Brewery (Austin)
Inspired by a traditional German gose, Snörkel is brewed with malted wheat and alderwood-smoked sea salt, but from there, the farmhouse brewery adds an umami with the neighboring Logro Farms' oyster mushroom harvest. Sip it from a goblet at the brewery, or take home a large-format bottle.

5.7% ABV, Karbach Brewing Co. (Houston)
Released in June of this year, the gose is Karbach's seventh offering in their research-and-development series. This one pairs well with gyros and tzatziki, or Camembert cheese. The experimental brew is available only on draft, and has been spotted locally at the Whole Foods at Arbor Trails.

5.2% ABV, Martin House Brewing Co. (Fort Worth)
Himalayan pink salt and coriander complement this lemony infusion. It's the perfect companion to a warm night at the BYOB Peter Pan Mini-Golf.

Queen of the Mist

6.2% ABV, Martin House Brewing Co. (Fort Worth)
Two varieties of this fruited gose exist on tap at the Whole Foods at the Domain: red currant and passionfruit, the latter being the tartest.

4.4% ABV, Real Ale Brewing Co. (Blanco)
Fresh lime juice is added after the fermentation process, giving this gose extra zing. Available on draft at the brewery and in cans all around the city, Real Ale's Gose pairs well with ceviche and fish tacos.

4.2% ABV, St. Elmo Brewing Co. (Austin)
The tart and peachy Gozer has just come off the menu at St. Elmo, so if you missed it this season, keep an eye out for St. Elmo's next fruited sour, made with the eponymous tropical fruit of the resident food truck: the soursop.

4.4% ABV, The Collective Brewing Project (Fort Worth)
Brewed with ramen noodles, lime, ginger, lemongrass, and seaweed-cured Japanese sea salt, this passion project pairs well with – you guessed it – ramen.
A version of this article appeared in print on October 6, 2017 with the headline: Give It a Gose