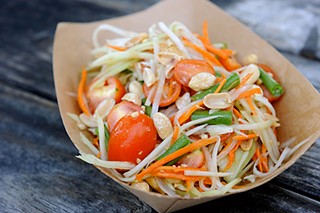 When I write my misty, inevitably falsified memoir, Dee Dee's om gai ($10) will factor heavily in the sections covering the summer of 2016. Here it is as a reward for getting exactly two compliments after moderating a panel (a new world record); there it is as a consolation prize when my staycation morphed into working from home. It was there through vain attempts at watching the Criterion Collection on Hulu and Saturday afternoon text parties with my best friends. And when it was not there – as when I made myself order something else during a recent "D"-themed double-date (probably best not to elaborate on that one) – it was all I wanted to talk about. The most rewarding foods manage to be wholly singular while somehow universal. My mother may not have cooked anything with the herbal complexity of Dee Dee's om gai, but you can tell it's a dish that gets passed down generations, a dish that kids ask for on birthdays. Roughly cut chicken and zucchini soaks in a broth fragranced with scallions, chiles, and herbs, served with a fistful of sticky rice. The licorice whip of Thai basil hits the nose first, with just a hint of citrus from lemongrass, but the dill rises above all that once it hits the tongue, providing the same exhilaration as it does in a pickle brine. If it's comfort food, it traffics in the type of comfort that makes you forget you ever had sorrows in the first place. The use of dill may have tipped you off that Dee Dee's cuisine isn't the same stuff as you'll find at most of the restaurants in town with the word "Thai" in their name. Most of that cuisine, indeed most of the Thai food populating American menus, comes from central Thailand, but Dee Dee's food comes from co-owner Lakana Trubiana's upbringing in Isaan. The arid northeastern region's culinary traditions have more in common with neighboring Laos than the country's core – particularly in their use of sticky rice over long grain jasmine. Dee Dee's remarkably consistent sticky rice is the foundation of most of the menu. The other co-owner (and Lakana's husband) Justin Trubiana advises every new customer to use it like bread, sopping up the juices from the om gai or using it as a utensil in the larb moo ($10), ground pork stir-fried with chiles, shallots, and whole Thai basil and cilantro. The lime top-note of the dish is particularly reinforced when served alongside som tom ($9) – perhaps the most famous dish of the Isaan region. Dee Dee's version of the papaya salad is electrifying, the brume of fish sauce lost in sour and heat, all absorbed by (you guessed it) sticky rice. Pad kapow ($10) is the only traditional dish that skips the ubiquitous ingredient (there is also a garden tofu stir-fry – $9), letting a fried egg ooze over jasmine. Be warned that even though Lakana will adjust the heat if asked, there is some inherent spiciness to the cooking. The not overly treacly Thai iced tea ($3) and the mango and sticky rice ($10), cooled with a ribbon of coconut milk, are necessary companions. On Wednesdays through Fridays, Dee Dee also offers the milder treat of moo ping ($5), faintly sweet pork skewers served with a tangy dipping sauce.

The seemingly simple snack is a testament to the values of the couple who run it. The pork begins a two-day marination on Monday, one of their days closed, so it can be ready in limited amounts on most weekdays. And it serves as a metaphor for the entire operation. The food at Dee Dee isn't complicated, but the production of it seems exhausting. Justin takes orders and runs the front-of-house (err, trailer) while Lakana cooks everything to order (there is some wait typically, but she works surprisingly quickly) – all in the heat of the Austin summer. But in the course of several visits, I've never seen either of them seem "over it." When you are making food this good (the name translates literally to "good good"), this worth the effort, you have to believe that a humble trailer is just the beginning.