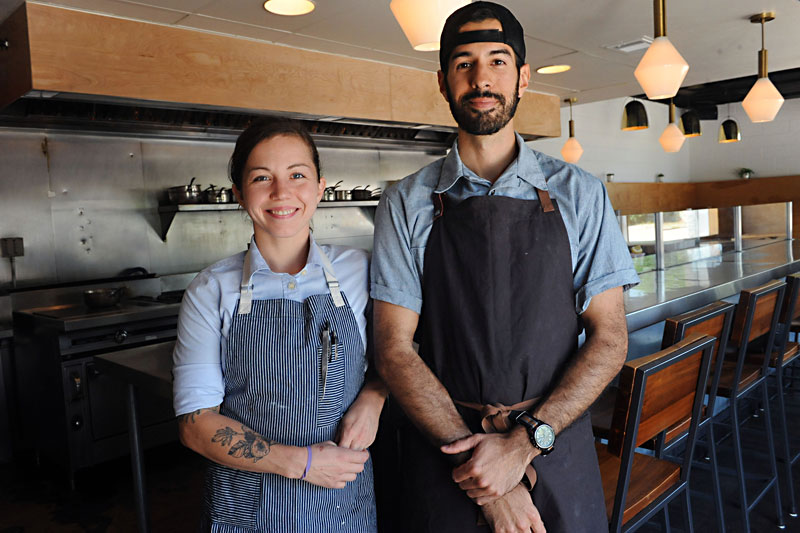 After putting in 50-plus-hour work weeks in high-stress kitchens for over eight years, Lori Bergeron grew weary of her culinary career. "I'm also a cyclist and a rock climber," says the sprightly 32-year-old. "That didn't really allow me to lead a balanced life." With the just launched pop-up dinner series De la Terre, she and fellow forager Anthony Nicaj create a 10-12 course seasonally driven tasting menu just one night a week at Foreign & Domestic. And they couldn't be happier.

Upon returning to Austin at the beginning of the year, Bergeron, who received most of her formal training at Uchi, reconnected with Nicaj, a former colleague who at the time was running his personal chef service, Gather & Forge. "One night we were hanging out, cooking – I think I was teaching him to roll pasta – and I said, 'We should start a supper club,'" Bergeron recalls. "I wanted to cook food that I was proud of. And I didn't want to feel like I was compromising." Nicaj, by then resigned to catering to his clients' many dietary restrictions, shared the sentiment.

Almost immediately, the chefs bonded over their mutual passion for foraging: Bergeron has been gathering "by bicycle" for years, and Nicaj caught the bug while traversing the U.S. for eight months on foot. "It became addicting," Nicaj remembers. "There's a reward if you look hard enough. And if it's not there one week, you might come back and it's like, 'Jackpot!'" The pair had just returned from an unsuccessful dewberry expedition when we sat down to discuss their new venture.

The dinner series' debut on May 16 served 10 courses to 30 guests, a number the team admits was ambitious for opening night. "It was great," says Nicaj with an assured smile. "It was mayhem." While the chefs chaotically composed dish after dish ("We're plating things with tweezers, using flowers," laughs Bergeron), guests were buzzing in the dining room over bites like seared scallop wrapped in prosciutto, asparagus two ways, and hazelnut velouté. Other favorites included Nicaj's sourdough with cultured butter and dewberry jam; and lavender beignets with duck egg ice cream infused with locally harvested honeysuckle.

"We're trying to utilize as many things as we can find on our own," says Bergeron, citing local flora like bull briar, wood sorrel, and bee balm. "Secondary to that, we use farmers that we stand behind [like HausBar, Texas Quail Farms], and then we try to source from companies we believe in [Salt & Time, Mill-King Creamery]." De la Terre also promotes the philosophy that diet should be dictated by the seasons. "We had loquats on the menu," she explains, "and four days before we were ready to make the food for night one, they all shriveled and died." Berge­ron agonized over the missed opportunity and considered locating a batch of the tangy fruit to freeze for later, before finally accepting their fate and scrapping that dish. "It pushes you to really notice things," she muses. "It's exciting, disappointing, and amazing all at the same time."