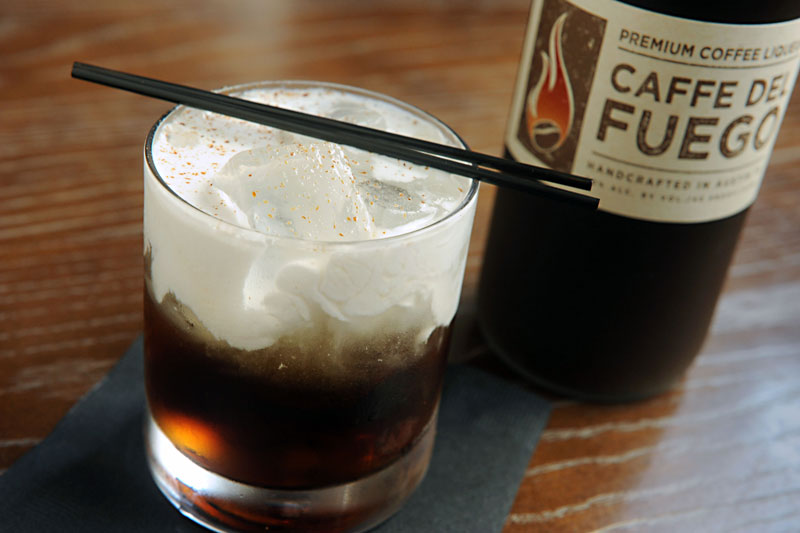 Think back to the last time you had an espresso martini, or worse yet, the unspeakable B-52. How did coffee, the widely beloved beverage, become so unsexy once mixed with booze? For that, we can thank big-name coffee liqueurs that will go unnamed. The turn-off is certainly not coffee itself, but all the cloying corn syrup and artificial flavorings that drag down whatever they touch.

But as coffee drinkers become more selective about their morning brew, distilleries are following suit. These new-school coffee-infused spirits are set apart by several features, but the use of quality sweeteners is key. Artisan distillers are also more meticulous with the coffee roasting, blending, and brewing process. Beyond the bean, the makers often season the mix with herbs and spices.

Enter Austin's own Caffe del Fuego, which loosely translates to "coffee of the fire" in an intentional combination of Italian and Spanish. Peter Remington and Mark Koelsch founded Remington Family Distillers in 2013, and this is their flagship product. Remington boasts about how straightforward Fuego's four-ingredient formula is: coffee, cane sugar, Madagascar Bourbon vanilla bean, and a neutral high-proof corn spirit. "I can show you how to make it at home in 20 minutes," Remington says of his no-nonsense approach.

Unlike the aggressively scented chemical-laden varieties, Caffe del Fuego is subtle on the nose. Pour it over rocks, swirl, and sip, and the coffee flavor hits the palate in a clean, inviting way. It has the classic, comforting properties of a properly made cup. Not overly boozy or sweetened, it has a round finish that does not overstay its welcome. The vanilla lends floral notes without stealing the show.

Remington fondly recalls how Vincent Perry, a dear Italian friend from Spokane, first introduced him to his homemade coffee liqueur. When Perry passed the recipe on to him, "Don't screw it up!" was his only caution. His photo now graces the back label.

Over a span of two years, Remington and Koelsch worked with Jess Haynie of Austin Roasting Company to refine the coffee blend. Coffee nerds will be glad to know that the blend is ethically sourced from microlots in Brazil, El Salvador, Mexico, Ethiopia, and Indonesia, all of which are roasted to different levels to achieve an earthy and fruity balance. Remington tweaked the original recipe and was able to reduce the sugar content by 25%, which he attributes to what he calls "Jess' coffee prowess." The rich roasts deliver enough punch to allow for less sugar and vanilla. After blending the four ingredients, the flavors marry over 30 days.

While Remington encourages drinkers to enjoy the product straight, he has also piqued the interest of local bartenders. Coffee liqueur is a common ingredient in tiki cocktails, so Trey Jenkins of Isla mixes Fuego into the Hummingbird along with cognac, raspberry liqueur, and a banana coconut milk. "Caffe del Fuego adds richer fruit flavors ... while not being overly sweet. It lets you taste the other ingredients while standing out as well," Jenkins describes. The island drink is being showcased during Texas Tiki Week (Aug. 2-9).

Jason Stevens, the bars, spirits, and beverage director of Congress' sibling establishments, has been playing around with the liqueur, too. "It's refreshing to see a quality local liqueur," he explains. Since coffee and booze cultures are both prominent in Austin, Stevens says, "It makes total sense that a quality coffee liqueur would be made here. Caffe del Fuego is very smart with their recipe formulation, making it all about real coffee flavor."

Stevens concocted the below drinks for y'all to make at home – you won't find these on menus anywhere yet.

A rich daiquiri variation that uses coffee flavors to highlight the rum.

Combine all in a shaker, add cubed ice and shake. Double strain into a chilled glass.

¾ oz. coconut milk (lower fat with no stabilizers, if possible)

For a list of Caffe del Fuego stockists, visit www.rfdistillers.com.