The quandary of ethical eating 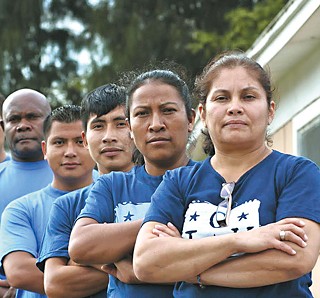 One of the great tactile pleasures in life is food. Few things are more enjoyable than cooking and eating a meal made of carefully selected ingredients. But it's hard to savor food that's the product of forced labor and exploitation.

Late last year, the Los Angeles Times published a devastating series of articles about working conditions for laborers on Mexican farms. Among other things, the Times found that "[m]any farm laborers are essentially trapped for months at a time in rat-infested camps, often without beds and sometimes without functioning toilets or a reliable water supply," and "[m]ajor U.S. companies have done little to enforce social responsibility guidelines that call for basic worker protections such as clean housing and fair pay practices." Many of the laborers interviewed had begun working in the fields as children. Given that a good deal of the produce sold in Austin is imported from Mexico, the likelihood that some of it is tainted by human suffering is high.

And, unfortunately, it's not only foreign growers that are guilty of bad labor practices. In 1993, the Coalition of Immokalee Workers was formed with the goal of fighting the widespread abuses in the Florida tomato industry. At the time, the tomato fields were one of the worst places for workers, and sexual assault and human trafficking were not uncommon. Slowly, the CIW, made up of the very people who were being mistreated, made progress. While they began by appealing to the growers who employed them, they came to realize that growers often have little bargaining power themselves: They're at the mercy of the fast food and grocery chains that dominate the produce market.

By refocusing their efforts on individual major buyers, the CIW has been able to bring about real change. In 2001, they launched their first campaign targeting Taco Bell. The CIW called on consumers to boycott the brand and universities to kick the restaurant off their campuses until the chain agreed to only buy tomatoes from growers that complied with certain labor standards. Although it took years, Taco Bell eventually acceded.

Since then, many corporations have followed Taco Bell's lead, often after being the subjects of similar campaigns. Twelve other buyers, including not only most major fast food companies, but also Wal-Mart and Whole Foods, have become part of the CIW's Fair Food Program, which requires participants to pay about a penny more per pound of tomatoes, and only buy from growers deemed by an independent auditor to meet the FFP's code of conduct. About 90% of Florida tomato growers have agreed to implement the program on their farms.

What sets the FFP apart from vague commitments to social responsibility is that the members of the CIW, farmworkers themselves, know what it takes to ensure accountability. For instance, not only are participating growers audited by the independent Fair Food Standards Council to monitor their compliance with the agreed-upon code of conduct, but they also must allow the CIW to hold "worker-to-worker education sessions ... on the farms and on company time to insure workers understand their new rights and responsibilities." A claim of no workplace complaints means more when employees actually know how to file them.

Nely Rodriguez, a member of the CIW who came to the U.S. 16 years ago after working in the fields in Mexico, said through a translator that the "work is really important. The rights and changes we're seeing today weren't our experience in Mexico or here [in Immokalee]."

When I heard that Whole Foods and Wal-Mart would be selling Fair Food tomatoes, I was eager to try them myself. But, I failed to take into consideration the fact that, here in Texas, it's cheaper and more environmentally responsible for stores to stock tomatoes grown in-state or in Mexico whenever possible. Whole Foods and Wal-Mart agreed to purchase their Florida tomatoes from FFP growers, but the program doesn't affect their suppliers outside of the state.

That doesn't mean that Austinites are stuck with produce of uncertain provenance, though. We're lucky to live in a place that has an abundance of small farms, many of which are open to the public. Some, such as Green Gate Farms and Johnson's Backyard Garden, use volunteers to supplement their paid labor. As a longtime, intermittent volunteer at Johnson's, I've been able to participate in many parts of the farm's day-to-day operations, including planting seeds, caring for young plants in the greenhouse, digging up carrots in the fields, and sorting and packing produce in the warehouse. Having seen things for myself, I feel like I can trust the quality of Johnson's produce. Natali Rodriguez, a member of the Student/Farmworker Alliance, which collaborates with the CIW, says that the Fair Food campaign has always encouraged consumers to engage with their local farms, and to consider growing some of their own food as well.

Buying food only from trusted local farms, of course, limits the number of ingredients available to what can be grown in Austin. For those who want more options, Whole Foods has instituted Whole Trade, a certification program for suppliers from "developing nations." While Whole Trade is a creation of Whole Foods, and not farmworkers, it does have certain aspects that recommend it. Most importantly, Whole Trade growers are certified by four independent parties – Fair Trade USA, the Rainforest Alliance, the Institute for Marketecology, and Fairtrade International. In order to get a Whole Trade sticker, a supplier must meet requirements for "occupational health and safety, legal minimum wage, full rights and benefits, and never any forced labor, discrimination, or child labor."

Finally, the CIW's work is not done. The Times series, along with the 2014 documentary Food Chains, have brought greater awareness to the lack of standards on many farms. Nely hopes that the film will allow the CIW to reach more people and get more corporations on board. Although four of the five largest fast food corporations are Fair Food participants, Wendy's continues to hold out. "The best way to support the CIW is to support their campaigns," says Natali. Last November, members of the CIW and the SFA visited Austin to discuss their Boot the Braids campaign, which asks universities to end their contracts with Wendy's until it joins the FFP. The most recent company to join the program is North Carolina-based grocery chain Fresh Market. Unlike Whole Foods and Wal-Mart, Fresh Market has pledged to increase the percentage of Florida tomatoes purchased, setting a precedent that other buyers will hopefully follow.