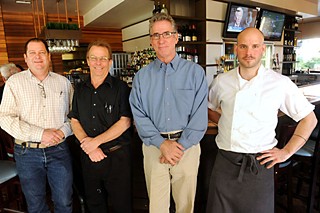 Every morning Bick Brown wakes up and checks the price of potatoes. The Hyde Park Bar & Grill owner knows that even small fluctuations in price can have a major impact on his business. Although he can't tell you how many pounds of potatoes he goes through in a week, he knows it is a lot. Just about everyone who comes to Hyde Park Bar & Grill expects to eat their famous battered french fries.

"It's funny to think that my legacy to Austin has been the french fry," Brown muses. "People ask for our recipe and I gladly give it to them, because when you make french fries like these, it's a serious commitment." They start with hand-cut Idaho potatoes and soak them in buttermilk. The potatoes are tossed in seasoned flour, blanched, and then fried. Not only is it labor-intensive, but it also requires the right kitchen setup. Hyde Park Bar & Grill has custom designed a system to handle the massive fry volume. Brown notes, "We have the most expensive fryers you can buy, we filter the oil three times a day to make sure it does not get old, and when we change it, the oil drains directly into holding tanks out back that are emptied every day." The process is not for dilettantes.

When he first hatched the plan for Hyde Park in the early Eighties, Brown wanted to establish a neighborhood bar and grill that served quality food at affordable prices. Back then, casual fine-dining options were few and far between in Austin, and the restaurant was an instant success. The house was packed every Friday and Saturday night, when waits for a table could exceed an hour. "When we opened the restaurant in 1982, we described it as a contemporary bar and grill," Brown recalls. "Well, now I think it is safe to say that 'contemporary' has long since passed us by."

Nowadays, the Hyde Park Bar & Grill is on no one's most-talked-about list for Austin. On the other hand, meal traffic is still reliable at the original location on Duval Street, so much so that Brown and his partners opened a second location at the Westgate Shopping Center in 2006. Indeed, after 31 years of business, the restaurant has managed to execute a minor miracle in an industry where most places go belly-up in the first two years.

Their success is due in part to their ability to listen to customers and to bring consistency to the food. To do that, they rely on staff, many of whom have been with the restaurant almost since day one, including the general manager at the Westgate location, the bartender at the Hyde Park location, and several of the employees in the kitchen. A number of other employees are going on 16 years. This is practically unheard of for most food establishments. In restaurant chronology, employee years are like dog years: Each one counts for seven.

Lately, the Hyde Park Bar & Grill is walking a tightrope between the loyalists who want everything to be just as it was 30 years ago and a younger generation who see the restaurant as a food-fashion artifact from bygone years. The older clientele still expect their meat and two sides, while younger diners want a composed plate, innovation, and craftsmanship. A story about the popular Wom Kim's peach pudding offers a good example of the tension between old and new. This has been the restaurant's signature dessert since the early years. Initially, it was made with frozen peaches, then a few years ago, in an effort to modernize it, they tried making it with fresh peaches. Longtime customers complained that it was not as good, so eventually they went back to frozen. (By the way, it's delicious.)

But even with an established clientele, the restaurant struggles to stay relevant. Recently, the restaurant hired Chris Turgeon, formerly of Haddingtons, to update their menu. Using the Westgate location as a testing ground, they've replaced some of the old-fashioned sides and main dishes with foods that appeal to contemporary tastes. Gone are the sweet-corn salad, rice pilaf, and heavy fettuccine with cream sauce (a staple on many a menu of yesteryear); new items include tangy black pepper slaw, herb-roasted veggies, and a greater variety of seafood options.

They have been tinkering with format, have started buying organics, and have also begun making more foods, like their ground beef and the pastrami for their Reuben, in-house. "Our pastrami now tastes better than it ever has," say Brown, who is a pragmatist when it comes to business. If something tastes better made in-house, and there is very little cost difference, then he sees this as a win-win for everyone. So far, the reception to these innovations has been positive.

One of the other ways Hyde Park Bar & Grill has stayed current is by catering to special diets. New notations next to each menu item lets you know if it is gluten-free, vegetarian, or vegan. In fact, the Westgate menu now offers a complete vegan plate consisting of seared sliced cauliflower over curried lentils, as well as a robust selection of veg-based menu items such as veggie burgers, steamed green beans, and spiced baked sweet potatoes. This seems to appeal not only to the restaurant's older clientele, who may not be able to pack away the fat and carbs like they once did, but also to a younger, more health-conscious generation of diners trying to ward off premature prescriptions of Lipitor.

Brown and his partners expect to bring the new menu to the Duval Street location shortly after the new year. Longtime customers need not fear: The chicken-fried steak, the pimento sandwich, and – of course – the fries aren't going anywhere. But as Hyde Park Bar & Grill slouches into the 21st century, diners may be in for some surprises yet.