This bakery satisfies your sweet tooth


As proof that there is no justice in this world, Blue Baker opened in College Sta­tion in 2001, which means that Aggies have been enjoying scratch-made artisanal pastries and breads a full decade longer than we have. The bakery and cafe opened in the Arboretum shopping center in May, finally providing Austinites the opportunity to experience sweet carbohydrate bliss. As such, while the restaurant is open for breakfast, lunch, and dinner, the space and the menu are best suited for lunch or a sweet snack. 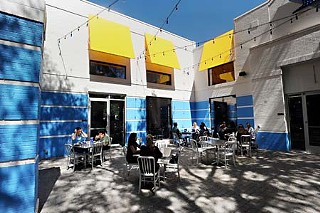 The breads and pastries are the stars of the show here. Every month, Blue Baker posts a calendar of the rotating daily specials from the bakery so that guests can plan their visits accordingly. The month of August found me returning for both the Nutella chip roll and the sea salt caramel brownie. The yeast-based pastry resembled a cinnamon roll, but instead of cinnamon-sugar and a creamy glaze, it was filled with a generous smear of Nutella and studded with chocolate chips. It was large enough and rich enough to spread out over two servings, but was at its best while soft and fresh. The brownie was similarly rich, if perhaps a little too generously salted, and half of one was sufficient for one sitting. On a recent trip for an early dinner, our family enjoyed a variety of cookies ($1.75 each) and found them all to be delicious. Saving room for dessert is a must, as is perhaps making room on the family breakfast menu for sweet breads like the perfectly spiced pumpkin bread and the bursting-with-berries Red, White, and Blue Sweetbread.

Equally as impressive are the sandwiches. My personal favorite is the Tejas Blue (regular $5.50, large $10.50), which features turkey breast, guacamole, and hot sauce on spongy, mildly tangy sourdough (the bakery's signature bread). A close second is the Club Bleu ($6.75), a dieter's nightmare of ham, turkey, bacon, Swiss cheese, mayo, and vegetables on a large butter croissant. Diners can opt for a Baker's Combo ($8), adding a cookie and a drink to a sandwich order; one of our dinner companions opted for the next level combo, the Baker's Plus ($9.50), which pairs a sandwich with a small salad. She chose the Baby Brutus ($3.75 side, regular $7), which features spinach, goat cheese, walnuts, and raisins served with a balsamic dressing so heavily reduced it resembles tar (but is otherwise tasty).

The rest of the menu is not particularly inspiring. It's been too hot for soup, and the various bagel sandwiches on offer for breakfast aren't particularly enticing, but the pizzas are quite possibly the least interesting part of the menu. I chose the least boring-looking one I could find, the Mediterranean ($9, $12, $15), a white pizza topped with artichoke hearts, roasted red peppers, and Kalamata olives, with feta and mozzarella cheeses. It was fine, but I longed to be sinking my teeth into my beloved Tejas Blue.

However, my biggest complaint about Blue Baker is the way the proprietors have chosen to use this cavernous space. It is perplexing at best and maddening at worst. The ordering system is confusing and during busy times can border on chaotic. The drink station in the corner is similarly frustrating, prone to bottlenecks if more than one person wants a drink or a lid at the same time. What's more, the various dining areas, save for a wing devoted entirely to booths, aren't very cozy. The high ceilings and broad footprint suggests a cafeteria or some other semi-institutional setting, shutting down any desire to linger over a meal.

Aesthetic complaints aside, Blue Baker is a delicious addition to the landscape of lunch in Austin. It's fast, kid-friendly, and fairly priced, especially considering the quality of the house-made breads and sweets. These form the very agreeable substance of a restaurant whose stylistic faults sometimes threaten to overwhelm the dining experience.