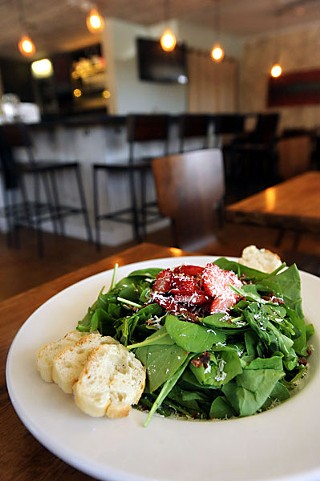 
When Henri's first opened in March, I was not quite sure what it wanted to be. Was it a cheese shop with only a handful of cheeses? Or was it a wine shop with just a short wall of wines? Perhaps it was a restaurant with limited seating and a handful of salads and sandwiches on the menu. If you ask owners Will Angst and Andy Means what exactly they had in mind, they may be evasive – and I suspect this is because they themselves aren't quite sure what they wanted Henri's to be. 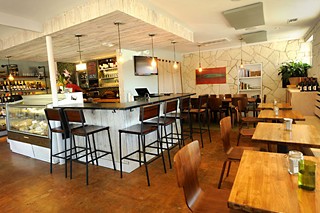 But in the six months since its opening, Henri's has steadfastly, organically come into its own. Sure, it hasn't hurt that Henri's is located next door to one of Austin's glamour destinations: Barley Swine. With its evening wine-bar service, Henri's has rapidly become a de facto waiting room for Barley Swine restaurant-goers. Here potential patrons nosh on artisanal charcuterie and cheese plates, accompanied by hand-selected beers or wine, while they wait for a table next door. It's a synergistic relationship that benefits both businesses.

But to dismiss Henri's as the scrappy kid brother to Barley Swine would be a mistake. This is because by day Henri's has some serious food mojo bubbling forth from its own kitchen. Partner Andy Means is a Culinary Institute of America-trained chef with a flair for flavor. Not only are the evening wine and cheese/charcuterie pairings spot-on, but so too are the original creations that emerge from the kitchen by day.

At Henri's, magic happens at lunch with a small but well-chosen menu of sandwiches and salads that may just be among the best in town. In fact, Henri's is rapidly becoming my favorite go-to spot for sandwiches. I am completely seduced by the Parrano ($8), a gooey grilled cheese, made from cheddar and gouda snuggled together with caramelized onions and slices of tomato. This sourdough sandwich drips deliciousness with every bite, and in spite of its splendid size, I cannot resist licking my plate clean. My spouse's reaction to the Steak Sando ($9) was not dissimilar. After polishing off the baguette sandwich stuffed with thin slices of grilled steak, chimichurri sauce, salty gouda, red onions and lettuce, he pronounced it the best steak sando he had ever eaten.

The other sandwiches I've tried have been equally tasty, if not quite as memorable. I love the Brie De Provence, brie and smoked pork on an onion roll ($9); roasted tomatoes and grilled onions round out the flavors of a sandwich that is hauntingly complex. An oven-roasted, carved turkey sandwich on whole wheat gets a boost from grainy mustard and thick slabs of Beecher's cheddar ($9.50).

I confess I have not tried the salads – the sandwiches here are just too tempting. However, the salads look equally tantalizing when they come out of the kitchen, and judging by the side salads that come with the sandwiches, I would bet money they are tasty. I keep telling myself I need to try the smoked scallop salad with fresh corn, toasted coppa, and micro greens ($12.50). But then the siren song of the grilled cheese always pulls me back into the abyss. Maybe if I go back enough times, or lash myself to a pole, I can escape Henri's without succumbing to the grilled cheese. I foresee I will need a stout rope.