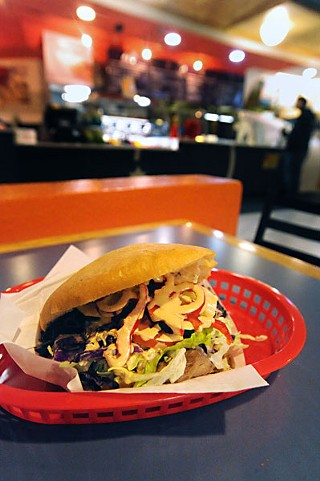 Dominik Stein and Michael Heyne met dur­ing their freshman year in college at WHU Otto Beisheim School of Manage­ment just northwest of Frankfurt, Ger­many. They had many college-oriented fast-food items to choose from – including the currywurst sausage roll, the brötchen sandwich, frikandel (a Dutch fried minced-meat log), the halbe hähnchen (half a chicken), pizza, and countless American chains – but their favorite food was the döner kebap, pronounced "DUHr-nah," meaning "spinning meat."

The döner kebap is a thing of beauty. Originally brought to Germany by Turkish immigrants during the reconstruction after World War II, in its homeland, the döner kebap consisted of sliced meat, tomatoes, and onions on a plate, served with a dab of yogurt. In 1971, one Turkish vendor in Berlin got the bright idea to pack what used to be on a plate into a pita, and the döner kebap of today was almost fully hatched. That pita then morphed into a thin, fluffy flat bread, completely unique from a pita or a Mideast flat bread. Now there are 17,000 döner kebap restaurants in Germany, and the number continues to rise. No wonder Germans were hooked on them. Cut to 2009: Stein and Heyne were now at UT's McCombs MBA program, and döner kebaps were half a world away.

"Sounds like a gyro or a shawarma," you say. We said the same, except that there are some crucial differences. First of all, döner kebaps taste better. The meat is not a processed, compressed meat log, but instead consists of thin, Turkish-spice-marinated slices of 90% beef and 10% lamb (or chicken): Texas-raised, stacked on the skewer layer by layer, and cooked as it spins around the vertical grill. As the meat spins around, it's shaved off to order with what resembles a handheld electric planer.

The stone-baked, light-as-air bread makes the sandwich, and you get a choice of lettuce, red cabbage, tomatoes, red onion, cucumber, corn, and feta (75 cents extra) for toppings. You can also order a carrot, potato, and celery stir-fry instead of meat. Sauces come in a five varieties: the house sauce (yogurt and dill), garlic (our favorite), spicy red (jalapeño-based), hot (habanero-based), and vinaigrette. We can't imagine why you wouldn't want the bread, but you can also get the sandwich in wrap or salad form. It costs $6.45; it weighs in at 580 calories; it's fresh, made from very high-quality ingredients, and it's delicious.

It must have been the engineering in their genes, but shortly after opening two locations, the guys decided to open the Guin­ness World Record-holding Smallest Food Truck housed in a 2011 Smart car. They were able to cram refrigeration units, food warmers, and sinks into the back, running on a couple of batteries, and functioning inside a pop-up screen shell. The plan is to operate at a location for 90 minutes, reload at base, then sprint off to another location for 90 minutes. "It's very resource- and energy-efficient," says Stein, "and Austin already knew the car from its Car2Go program. It fits the Austin food scene perfectly."

The two have added breakfast items to the menu, served as a wrap and filled with eggs, veggies, and beef/lamb, chicken, or bacon for $3 (two for $5). They also have a gorgeous and gleaming La Marzocco espresso machine and use top quality beans. Stein and Heyne are certainly ambitious, but they've jumped into the Austin food scene thoughtfully and brought us a new ethnic option that's fresh, healthy, affordable, and delicious.