The mother of all peppers 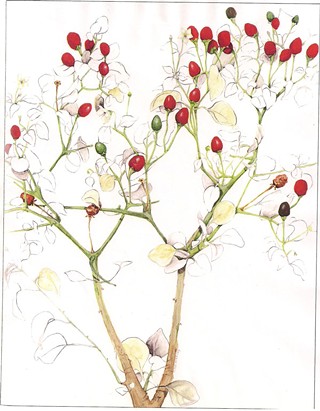 We might have guessed that one mascot chile just wouldn't be enough for the state of Texas. While the ubiquitous jalapeño is the official state pepper, we must also acknowledge that the tiny, fiery chiltepin is the official native pepper of Texas, courtesy of the 75th Legislature, which noted in the 1997 proclamation, "Even the mockingbird, our state bird, recognizes the appeal of this piquant pod."

Capsicum annuum var. glabriusculum is often called the "mother of all peppers." Most authorities believe the chiltepin was the original wild chile – the plant from which all others have evolved. It's also the only wild chile native to the United States. Originating in southern Brazil or Bolivia, chiltepins migrated up through Central America and Mexico into the American Southwest. Dissemin­ation is attributed to the wild birds that find these scarlet berries an irresistible snack. Because the seeds survive passage through the birds' digestive tracts, chiltepins are often found growing along fences and under trees where birds nest and roost. That's why they're commonly known as "bird peppers" to English speakers of the Southwest.

The name chiltepin (or chiltecpin) comes from the Nahuatl language of the Aztecs: Chilli plus tecpin means "flea chile," presumably referencing its diminutive size and sharp bite. These peppers are known by a variety of other names, including pequin, and though they're often used interchangeably, it's useful to make a distinction: Wild chiltepins are pea-shaped and thrive in arid conditions, while the domesticated pequin chiles are slightly elongated and marginally less piquant.

Wild chiltepins grow throughout Texas, and pequin chiles grow easily in Austin gardens. Chronicle Food contributor and horticulturalist Mick Vann says that both love growing in a neutral to relatively high-pH soil with lots of humus, and they're shade-tolerant. They produce the most fruit with morning sun and afternoon shade and a good soak now and then, but they'll also bear fruit in total shade and manage with minimal water. Linda Lehmusvirta, producer of Central Texas Gardener on KLRU, cautions that even if the plants freeze in the winter, they'll probably come up from the roots. "Mine (many self-seeded) all came back these past two harsh winters. Of course, like any plant, the microclimate influences what happens."

Chiltepins are a very hot pepper, scoring 8-9 on the Scoville scale. In Mexico, they're described as arrebatado ("violent" or "rapid"), indicating that the heat is great but diminishes quickly. And how do they taste? Vann's assessment: "Complex, with fruity/citrusy notes, and slight toasted nut and smoky elements with a searing crisp finish. Some say it has some corn overtones." No wonder the birds like them.

When green, chiltepins can be pickled en escabeche as a condiment. Both fresh and dried, they're used in salsas, stews, and cooked greens. Pepper artist and historian Jean Andrews has a recipe for chiltepin jelly in her book Peppers: The Domesticated Capsicums. So, that's it. I'm planting pequin chiles this fall. You?