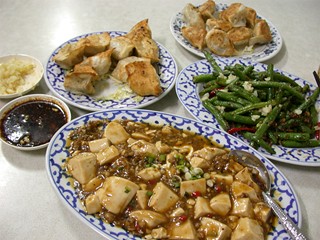 Sichuan-style spicy bean curd with pork has been one of my all-time favorite dishes from any cuisine through the years. When I started cooking Chinese food eons ago, it was the first dish I prepared. This is a dish that is alarmingly simple to cook, yet it remains one that the vast majority of Chinese restaurants mercilessly butcher. Mapo doufu is one of my several go-to dishes to gauge the authenticity of a Chinese restaurant kitchen's talents, and a half-assed nod to the concept is the best that most can muster. Some make it without the pork, which leaves it one-dimensional and vapid. Most make it without the Sichuan spicy fermented bean paste with chiles, which has a distinctive flavor profile and richness that's sorely missed when it is omitted, or they leave out the Sichuan peppercorn, a hallmark of the dish. Many think it can be reproduced with a standard brown soy-based sauce and some chile oil, or with just ground bird pepper or even ground black pepper. Traditionally, there are particular defining characteristics of the dish, described by these translated adjectives: numbing, spicy hot, hot temperature, fresh, tender and soft, and aromatic. It's a dish so simple to make correctly, yet so frustratingly difficult to find.

I first ate the dish cooked properly in San Francisco's Chinatown back in the mid-Seventies, and it ruined me for the rest of my years, except for the rare occasions when I stumble across an authentically prepared version. I remember Henry Chung's Hunan Res­tau­rant – the original tiny lunch counter location on Kearny Street – producing a particularly numbing and spicy rendering. Sichuan peppercorn (Zanthoxylum piperitum, Zanthoxylum simulans), that spicy, tingly, numbing, slightly lemony spice, is a necessary ingredient in the dish. Interestingly, we Texans have our own version of that peppercorn: the fruit of our native prickly ash, or toothache tree, Zanthox­y­lum hirsutum. Local American Indians used to chew the leaves to numb the pain of toothaches; as kids we used to chew the leaves because it was such a weird experience.

Even though Sichuan peppercorn was banned in the U.S. between 1968 and 2005 as a possible source for the importation of citrus canker, all of the spice-laden restaurants in Chinatown seemed to still use it back then. Obviously it was being smuggled in on the black market. I would always try to buy a supply in the spice stores of Chinatown, which I knew they must have secretly sequestered under the counter, but the merchant always said they had none, even though I looked nothing like an undercover Food and Drug Administration agent. Why take chances with a ponytailed white kid?

A few years back, I was in Thailand and had found out on the Web that a tiny central Chinese restaurant in Bangkok called Ta Yang Grou had the definitive version of the dish. The rumors were confirmed. Accompanied by amazing handmade pot stickers filled with shrimp and leeks or minced pork and garlic chives, as well as a platter of wonderful, dry-cooked long beans, its mapo doufu was ethereal. The pillow-like silky tofu cubes bathed in a thick sauce loaded with sweet minced pork were garlicky, tangy, rich, and searingly spicy. It was so good I almost forgot to photograph it.

Several legends surround the name and origin of the dish. It is generally accepted that the recipe was first cooked by a Mrs. Chen during the later years of China's Qing Dynasty (1644-1911). She made the dish at her husband's simple roadside restaurant on the outskirts of Chengdu, which served peasant travelers and laborers heading into the city's markets. Mrs. Chen had severe pockmark scarring on her face from a bout with smallpox, and after a time, the popular dish became known far and wide as mapo doufu ("Pockmarked Mother's Bean Curd"; "ma" means a person with pockmarks, and "po" means old woman). An alternate theory claims the name comes from the appearance of the dish. Alabaster cubes of tofu marked by little, dark bits of fermented bean, chile paste, and Sichuan peppercorn, the cubes appear pockmarked, much as a scarred face might. Another, weaker theory refers to "ma" as merely a reference to the numbing presence of Sichuan peppercorns in the dish.

Classically, the dish is prepared using a doubanjiang chile paste, the finest of which comes from Pixian County, a region within the boundaries of Chengdu. The best brands are made of fermented broad beans and soy beans combined with garlic, salt, rice, and chile paste. Some chefs also add a little mashed fermented black bean for saltiness and added dimension. The intense heat of the paste is supplemented by dried and crushed Facing Heaven Chiles (also called Sky Pointing Chiles) Capsicum annuum var. conoides: erect-fruiting, thin-skinned, cone-shaped peppers of medium-hot piquancy. A little black pepper rounds out the spiciness. As in a good salsa, flavorful heat is best when produced from a combination of sources.

It should always contain minced or shredded pork, and the tofu is either soft ("silky") or medium in texture; both are acceptable, but hard tofu should never be used. Garlic, a small amount of ginger and rice wine, a little soy sauce, rich pork stock, and a slurry of stock and starch to thicken the sauce round out the dish. It should never be prepared with a thick, gloppy texture but should have the consistency of medium gravy. The garnish consists of copious amounts of finely minced scallion or garlic leek, a liberal sprinkling of ground Sichuan peppercorn husk, and a drizzle of aromatic, hot chile-sesame oil. The intoxicating bouquet coming from a steaming bowl is enough to make an aficionado weak in the knees, and the rich, complex flavor is soul-satisfying whether it's hot or cold outside.

In Austin, the top versions of the dish can be found at these restaurants, see below, and after sampling so many bad versions, you'll notice my excitement when I locate a good one; forgive me for declaring each one of them "the best in town." The fact is, a true fan of the dish would be tickled pink by any of the following offerings.


Pao's version of mapo doufu is so close to the best in town that it defies difference. Small cubes of soft tofu with smoky chiles and minced pork are bathed in a thick sauce that is both rich and tangy, with a blast of black pepper and a hint of numbing yet spicy Sichuan peppercorn. This dish has megadepth and could be better only if it came in a bowl so that it stayed hotter for a longer period of time.


For several years this has been my go-to version in town. Its mapo doufu is one of the finest around: a large bowl of soft tofu with copious amounts of minced pork in a thick sauce of hot bean paste, fermented black beans, garlic, scallion, and Sichuan chile paste, with red oil and lots of mala (numbing Sichuan peppercorn). It's rich and lusty – numbing, complex, and spicy. 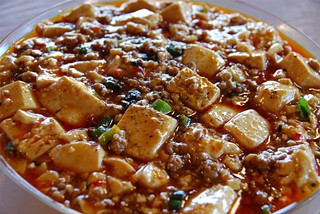 Mapo doufu at A + A Sichuan China, Austin (Photo by Mick Vann)

Sichuan Garden's version of mapo doufu could just be the definitive version in town: a large bowl of soft tofu cubes surrounded by a rich and thick sauce of garlic, hot chile-bean sauce, scallions, minced pork, and a subtle kiss of Sichuan peppercorn. It has richness, zippy spice, and perfect balance.

A + A Sichuan China


A + A Sichuan's version of Ma Po Doufu is a lusty temple to the gods of chile and mala: superb and perfect on a nippy day, delightfully sweat-inducing on a hot day. This is a fantastic version of one of China's best dishes, and it covers all of the required flavor bases: spicy, tangy, rich, unctuous, porkalicious, multi­dimensional.

Here's a recipe that I started cooking back in 1975, originally from Regional Cooking of China by Margaret Gin and Alfred Castle (101 Pro­duc­tions). I've reworked the recipe considerably over the years and made it my own.

Serves four as one course of a multicourse meal or two as an entrée.

Rice bran oil is the healthiest cooking oil – it is loaded with antioxidants and has a very high smoke point and a subtle nutty flavor.

The pork is best when shredded into a julienne, and a fatty cut is better than a lean cut. – M.V.


Preheat a dry, seasoned wok very hot. Over high heat, add 1 tablespoon oil and the pork, stir-frying for one to one and a half minutes, or until almost cooked through. Remove and reserve the pork.

Immediately add the remaining oil, and quickly add the garlic, ginger, and scallion, stir-frying for 30 seconds or until fragrant. Add the dried chile, stir once, and deglaze the pan with the rice wine. Add the pork stock, soy sauce, chile bean paste, and black beans (if using). Let the liquid almost begin to boil before adding the tofu, salt, and mushrooms. Cover and cook over medium heat for three minutes.

Combine the stock and starch to form a slurry free of lumps. Remove the cover and slowly add the starch slurry, stirring gently until the mixture thickens. Add the pork back in, reheat to bubbling, remove to a serving bowl, and add the scallion garnish, Sichuan peppercorn, and chile oil. Serve immediately with steamed rice.

Note: An excellent source of rich pork stock is to simmer 3-4 pounds of pork neck bones with enough water to cover, adding two knotted scallions, two ½-inch slices of ginger, two crushed cloves of garlic, and six black peppercorns. Bring to a boil, skim off any foamy scum from the surface, reduce heat, and slowly simmer one to two hours. Strain the stock through a colander, and skim off any fat on the surface. This stock can be refrigerated for a week or frozen.

If you cook spareribs Chinese-style, it calls for steaming them first to break down the collagen before they are marinated and stir-fried or deep-fried. The steaming liquid remaining after this process makes a dynamite pork stock once the fat has been skimmed. The lazy cook's way of skimming stocks is to chill them then remove the congealed fat layer on top all at once. Use the very flavorful skimmed fat for sautéing or stir-frying once it has been strained.