Tweet
print
write a letter
When a reader who spends his workdays on Anderson Lane e-mailed describing his favorite dishes at the Mexican restaurants along that 2-mile stretch of road between North Lamar and MoPac, it piqued our interest. A quick driving tour revealed four neighborhood restaurants on Anderson Lane proper. Not as many as the restaurant and food trailer-rich South Austin Mexican Food Mile along South First between Gibson (Izzoz Tacos/El Mercado) and El Paso (Torchy's indoors) but certainly enough to make things interesting. Contributing writer Rachel Feit was already curious about Casa Chapala after reading about it on her Shoalmont neighborhood listserv, so Kate Thornberry and I divided up the remaining three. What was our verdict? Tex-Mex rules this road. – Virginia B. Wood


Congenial brothers Jaime and Bernard Jaimes took over the former El Rancho Grande restaurant location about six months ago and are building a clientele by offering friendly service, generous portions at affordable prices, and solid renditions of traditional Tex-Mex favorites. Breakfast is available until 2pm, there's a list of very affordable mix-and-match specials for lunch, and the cost of the dinner options tops out at $12.50 for shrimp or fish. Currently they're only licensed to serve beer, but the brothers hope to offer margaritas in the near future. The menu is large and comprehensive, covering both American and Tex-Mex bases: migas and eggs with pancakes; tortas and a cheeseburger; bottled sodas and refreshing, homemade aguas frescas.

Some girlfriends joined me for lunch here recently, and we sampled everything from tacos and enchiladas to chile rellenos and tamales, enjoying it all. Tacos al pastor (three for $7.50) and tacos de lengua ($1.99 each) are first-rate. Enchiladas and many of the dinner dishes are offered with a selection of sauces. I found a roasted poblano chile relleno ($8.50) stuffed with simple beef taco meat and napped with a poblano cream sauce very appealing, but the chili gravy on my friend's tamale plate ($7.50) was on the bland side. We were favorably impressed with most of the basic building blocks here: a zippy table salsa; a good Tex-Mex chile con queso; tender, freshly made corn and flour tortillas; fluffy Spanish rice; and three choices of flavorful beans. The sopapillas ($3.25) could have used another few seconds in the fryer, but the creamy house flan ($3.75) was truly delightful. – V.B.W. 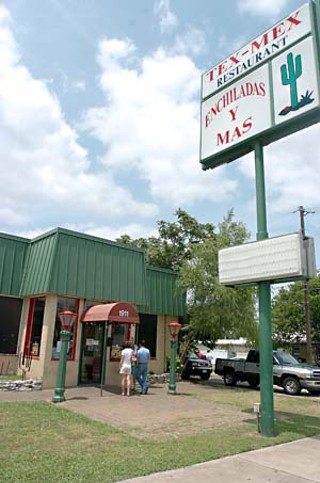 
Enchiladas y Mas has won recognition for its breakfasts, and breakfast is always available whenever it is open, but it is doing a booming lunch business these days, too. The food is definitely toward the Tex-Mex end of the continuum: lots of shredded lettuce, chopped tomatoes, grated American cheese, and a somewhat lower "heat" factor than many Mexican places. The menu is plenty long but not overly ambitious; besides the four breakfast dishes and mix-and-match breakfast tacos, it offers nachos, fajitas, chalupas, three kinds of enchiladas with your choice of five different sauces, a few salads, and a variety of combination plates. There are a few "American" items as well: American break­fast ($3.99), hamburger ($3.75), cheese­burger ($4.25), grilled cheese ($3), and a brief children's menu that includes chicken tenders ($3.95).

I wanted to be sure and try a breakfast item, so I opted for the huevos rancheros ($3.99). This rendition is pretty standard and workmanlike; the plate comes with two eggs any style, smothered in ranchero sauce, with refried beans and potatoes. The ranchero sauce has nice big pieces of sautéed onion, pepper, and tomato and solid, homemade flavor. The beans are bland, however, and the shredded potatoes were absolutely plain and mushy. Although the ranchero sauce was excellent, the dish as a whole had an unappetizing, watery-plate quality; it was okay but not outstanding.

The guacamole salad ($4.25) featured a big scoop of well-seasoned guacamole, containing visible chunks of creamy avocado – very good. The chili con queso ($3.75-4.75) was passable but had a mysteriously gritty texture. The Cunado's Special ($7.25) featured tortilla chips topped with queso, a crispy beef taco, and a cheese enchilada with beef sauce. The crispy taco had a good amount of well-seasoned ground beef, plus lettuce, tomato, and grated cheese in a crispy shell – very "retro" and yummy. The melted cheese enchilada with brown enchilada sauce was similarly middle-of-the-road, Seventies-era Tex-Mex.

The enthusiastic crowds that come here for lunch, sometimes even having to endure a short wait for a table, demonstrate that this style of Tex-Mex really hits the spot for many North Austinites. – Kate Thornberry 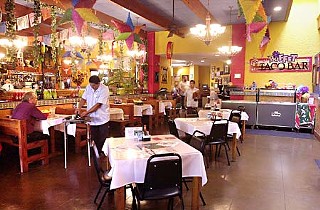 
Lupe and Lucina Barrangán relocated their Washington state business to Austin more than three years ago and quietly opened Casa Chapala, a Mexican restaurant discreetly tucked into a shopping center on Anderson at Shoal Creek. Since then, they've cultivated a steady clientele of families from around the Allendale, Northwest Hills, and Brentwood neighborhoods who have become devoted to Chapala's poblano enchiladas ($8.95) and Molcajete ($15.60) – a giant bowl filled with grilled chicken, beef, chorizo, peppers, onions, avocado, and salsa. Neighborhood folks come too for the friendly service and the excellent happy hour specials to be had at the full bar. Margaritas and mojitos for $2.99 from 5 to 7pm, $1 beers on Tuesdays, and ladies' night on Wednesday usually attract a crowd. The cheery interior is enlivened with brightly painted walls, glazed Mexican tiles, piñatas, and Mexican bric-a-brac. The waiters prepare fresh guacamole and spicy salsas tableside.

In addition to the standard roster of carne asadas, flautas, enchiladas, and tacos, Casa Chapala has recently added Interior Mexican fare such as chicken in pipian (a green sauce usually made of pumpkin seeds and hoja santa), moles, and fresh fish. The Barrangáns certainly have the right idea.

The devil is in the details though, and while these dishes looked promising on paper, their execution was less than impressive. The carnitas ($13.50) came to table as lumps of dried and flavorless pork that had been briefly braised then fried, not as the slow-simmered fork-tender morsels they should have been. The chicken in mole negro ($13.95) consisted of chunks of boneless, skinless chicken breast smothered in sauce from a jar. And the huachinango (snapper) Veracruz ($14.75) featured a not-so-fresh piece of fish topped with a barely cooked medley of skin-on bell peppers, diced onion, and sliced pimento olives loosely held together with tomato sauce, instead of the deeply satisfying symphony of tastes that should come from fresh fish topped with a slow simmering of roasted peppers and tomatoes married with capers, herbs, and olives. It was like the kitchen has the inspiration, it even has the recipes, but it did not take the time to go through all the steps. There just wasn't any love in the food we ordered. On the other hand, the table next to us seemed quite pleased with their salvers of fajitas.

I think next time we're sticking with the enchiladas and tacos. – Rachel Feit


La Casita is a bit of a hole in the wall, a tiny place with forbidding, steel-barred windows and doors, making it look as though it used to be occupied by a pawnshop. The atmosphere is "border town" Mexican: utilitarian, cheap, and garish. It feels like the kind of place where you order at the counter, but if you just sit down and hold your horses, a server will bring you the menu, which is surprisingly comprehensive. In addition to the usual tacos and enchiladas, La Casita offers posole, menudo, aguas frescas, mole, tortas, cabrito, chimichangas, fajitas, salads, burritos, rellenos, and a 17-item breakfast menu.

The freshly made table salsa is memorable, with bright notes of cilantro and sweet onion; it's a good indicator of things to come. The iced tea is served in enormous tumblers, and though it's a bit on the weak side, it is fresh. There are usually at least five varieties of agua fresca as well: tamarindo, horchata, limón, Jamaica, and pineapple/spinach ($1.75-2.25).

I had the Combo Mix No. 2 ($6.99), which consists of three tacos: carne guisada, al pastor, and fajita, served with rice and beans. The corn tortillas are house-made, with a wonderful, thinly tough texture, and all three meat fillings were well-seasoned. The fajita beef taco was garnished with lettuce, tomato, and cheese; the al pastor pork taco had the traditional cilantro and onions; and the carne guisada taco was plain meat and gravy (just as it should be). The pale orange Spanish rice is fine-textured, light, and dry, and the refried pinto beans have a nice, firm consistency and are very flavorful despite being prepared without lard. The lard-free beans, in fact, give La Casita a reasonable number of vegetarian options on an otherwise meat-heavy menu.

The chimichanga plate ($6.49) comes with the aforementioned rice and beans, and again, the chimichanga tortilla had a fresh, chewy consistency, not at all greasy, that gave a pleasant lightness to what can be a heavy dish. The chicken fajita salad ($6.99) was also unusually good: It contained spinach, mushrooms, cheese, tomato, peppers, onions, and avocados in addition to fajita chicken and was served with ranch dressing on the side. 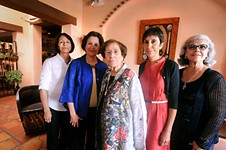 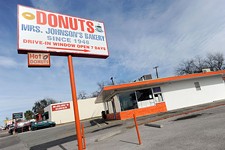 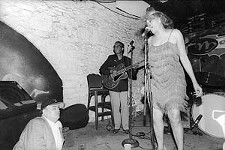