Pace Picante, the company that made salsa a household name 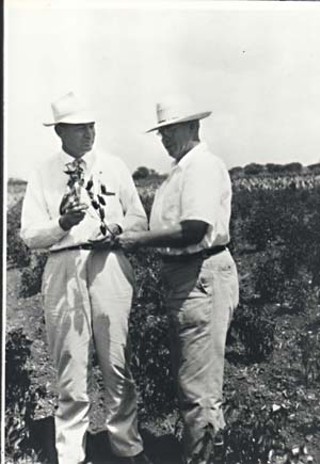 You can call it salsa, picante sauce, or even hot sauce, but you have David Pace and his family and a food scientist known as "Dr. Pepper" to thank for its popularity in America. The overwhelming success of salsa as a condiment can be attributed to the perfect alignment of several factors in the early 1970s: the growth of interest in Mexican and Southwestern cuisine, the increasing interest in fresh and healthy foods, the burgeoning role of the tortilla chip in the snack category, and the application of pure, basic food science.

America is not new to spicy, chile-based sauces. The first bottled pepper sauces appeared in Massachusetts in 1807. Wild bird peppers (chiltepins) were used to make a sauce in New York City between 1840 and 1860. The first Tabasco chile sauce was produced by a Col. Maunsel White at his Deer Range Plantation in Louisiana in 1859; he was the seed source for the McIlhenny pepper plantation on Avery Island. In 1877 in Chicago, William Railton was making his Chile Colo­row Sauce made "from a Mexican formula."

By the turn of the century, there were hot sauces being made and consumed with gusto all over America, but in 1917, La Victoria Foods in Los Angeles began manufacturing its Salsa Brava, a true Mexican-style salsa. In 1941, Henry Tanklage formed La Victoria Sales Co. to market a new line of red and green taco sauces, taking over the entire La Victoria brand by 1946.

David Pace's family had been involved before World War II in making cane molasses in Alexandria, La., where David learned the basics of food manufacturing and bottling. David had gone through his Army air training at a base in San Antonio. He loved the food and the city so much that he decided to settle there after the war. The year 1947 finds us in a small liquor store in San Antonio, where Margaret and David Pace produce a line of syrups, jams, jellies, dressings, pickles, and chile salsa in the back room, selling their products to groceries door-to-door. One of Pace's favorite foods was chile salsa. He wanted to be known as "the Heinz of salsa," and increasingly the bottled chile sauce, which he dubbed Pace Picante, was paying more and more of the bills. He decided to drop all of the other products and concentrate solely on the picante sauce. Pace was a zealot and promoted the sauce as a condiment for any food; he was even known to have added it to his coffee.

Sales grew over the years, and a divorce in 1976 left Margaret with the company, later sold to daughter Linda and her husband, Christopher "Kit" Goldsbury, who risked everything they had to buy the company in 1985. Goldsbury is the one who really popularized Pace Picante by expanding the product lines, modernizing the manufacturing process, and advertising creatively (many remember the famous "get a rope" tagline).

Knowing that product consistency is the key to brand loyalty, in 1982 Pace hired food scientist Dr. Lou Rasplicka as vice president of (food) technology; he would later earn the nickname "Dr. Pepper." Rasplicka, a former president of the Texas Pepper Foundation, used liquid gas chromatography to determine the capsaicin levels in parts per million of each incoming batch of jalapeños. For a company that uses around 30 million pounds of jalapeño chiles per year, testing is essential. "Chiles of the same variety can vary widely in heat, depending on growing temperature, rainfall or irrigation amounts, and lots of other factors," Rasplicka says. "A mild batch of salsa will measure three to four ppm, medium will be between eight and 10, hot is more like 14 to 15, and extra hot will be around 20 ppm. David Pace's original 1947 sauce compares to medium, or about 8 to 10 ppm."

Perhaps Rasplicka's biggest accomplishment was his role in hybridizing the no-heat jalapeño. Dr. Ben Villalon of Texas A&M University had developed the mild TAM-1 jalapeño variety in Weslaco, but it still had some residual and variable heat, and some critics had described the taste as "grassy." In a quasi-secret hydroponic greenhouse at a dusty test farm in Quihi, about 10 miles east of Hondo or 40 miles west of San Antonio, Rasplicka headed up 4½ years of selective breeding to come up with the no-heat jalapeño chile. Test plots were planted all over the contiguous states and Hawaii to grow the no-heat chile plants in areas far from other chile production, to ensure that cross-pollination could not occur. The variety is patented, with seeds kept in a secure vault so that periodic DNA testing can be performed against the seeds in rivals' salsas to make sure that no company has stolen the genetic blueprint.

At 4 to 7 inches long, with a jalapeño shape and vibrant jalapeño flavor, thick walls, and no heat at all, the no-heat jalapeño is the key to Pace's consistency. "When a particularly spicy batch of chiles comes in and is measured, we can quickly determine through a simple formula how much of the no-heat chile to add so that the salsa has the correct balanced heat level and proper jalapeño flavor. For the mild version of the sauce, we use more of the no-heat chile but still get the flavor," says Rasplicka. In the early Eighties, Goldsbury wanted more variety in the product line. For a scientist dependent on proper lab method, the initial selection of the taste for Pace's mild, medium, and hot labels was exceptionally unscientific. "I led Kit and [President] Rod Sands into the lab, and we sat there and mixed mild, medium, and hot batches based solely on our taste and what we liked, with no machines at all. We got it amazingly close, but we did have to alter the batches slightly. As it turns out, humans can taste capsaicin in parts as small as 1 ppm; for some, the 4 ppm mild was a little too hot. We made it 3 ppm, and they could taste the difference. We had to do some slight alteration," says Rasplicka.

As salsa grew to become America's No. 1 condiment, surpassing ketchup in 1991, more and more brands hit the grocer's shelves. Pace was now competing in the market with thicker salsas, as well as a large number of upstart gourmet brands. "We had a few surprises when we added chunks of diced tomato to the sauce. It changed the flavor profile and made it less spicy and a little sweeter. We had to add a little extra jalapeño heat to balance it out," said Rasplicka, "but the Thick & Chunky label has been very popular with the consumer."

When Pace (www.pacefoods.com) was acquired by Campbell's Soup Co. in 1994, Pace controlled the largest share of the market, with sales estimated at $220 million per year. The selling price to Campbell's was a staggering $1.12 billion, not a bad end to a business that started in the back room of a liquor store.

Rasplicka stayed on with Campbell's for several years, but had no desire to follow the company to its new plant in Paris, Texas, when it shut down operations in San Antonio. He joined several other past Pace employees to form a new company in San Antonio called Triad Produce, which sells 55-gallon drums of brined jalapeños to industrial clients. He didn't have a piece of the Campbell's deal, but "all of the Pace employees ended up coming out good on the deal."

Although Goldsbury is a very wealthy man now, he is also credited with making the largest single donation ever made to culinary education. It took him four years to convince the Culinary Institute of America that San Antonio was the perfect spot for the Center for Foods of the Americas (www.ciachef.edu/sanantonio), established in the stunningly remodeled old Pearl Brewery. The bulk of Goldsbury's gift of $35 million will provide scholarships for students (especially Latino culinary workers) to attend the center's 30-week program.

The best of those students will be given full scholarships to attend the Culinary Institute's Hyde Park, N.Y., campus for one- or two-year degree programs specializing in foods from Latin Amer­ica. Goldsbury's gift will also fund a $7 million expansion of the Center for Foods of the Americas in San Antonio, and $5 million will go to build a comparable program for Latin American food studies at the Hyde Park campus.

The competitors in this year's 18th annual Austin Chronicle Hot Sauce Festival can only dream of the luxury of having a Dr. Pepper, liquid gas chromatography, food science labs, and chiles full of flavor with no heat, but all of them, somewhere in the backs of their minds, see winning the contest as a launching pad for commercial success. It's the same dream that propelled Dave Pace in those early years when he wanted to be the Heinz of salsa and the dream that made Kit Goldsbury into a billionaire.