On the trail of pastel de tres leches 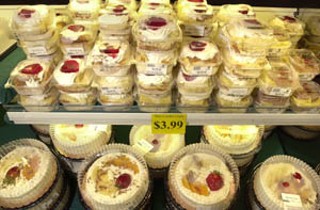 I just love a good mystery. But I didn't know I was getting into one when Chronicle Food Editor Virginia B. Wood asked me to check out the burgeoning popularity of tres leches cake in Austin, and what it might be about. I simply thought that this was a sweet dessert that I didn't know very well, and yes, I sure have seen it a lot recently on menus around town.

In its traditional, unadulterated form, pastel de tres leches (pastry with three milks) is a vanilla-flavored sponge cake drenched with a mixture of evaporated milk, sweetened condensed milk, and cream, and then frosted with whipped cream or meringue. Already powerfully rich, it's often gussied up with additional flavors and garnishes such as tropical fruits, nuts, caramel, chocolate, coconut, and various liqueurs.

Amateur food detective that I am, I needed a little background first, and I began with a Google search. When I got 2,250 hits for "tres leches" (750 hits for Austin alone), I realized that a bona fide food phenomenon was indeed going on here.

I quickly learned several things, the first one being that there are a lot of recipes for tres leches flying around cyberspace. I found versions from Mexico, Nicaragua, Panama, Cuba, Puerto Rico, Guatemala, and Costa Rica. There are recipes from restaurants, bakeries, and myriad individuals and home-cooking sites. There are elaborately complicated concoctions from celebrity chefs, as well as no-fuss versions put together with store-bought pound cake and aerosol dairy cream. However, at bottom, they are all recognizably pastel de tres leches with the same three elements: a cake soaked in a sweet milk mixture and topped with whipped cream or meringue.

But, my goodness, this sweet treat certainly seems to be piquing a lot of palates in the United States lately. Besides its presence on so many restaurant menus and the limitless recipe exchange on the Internet, another indication of cultural popularity is that both Häagen-Dazs and Blue Bell introduced a tres leches ice cream in 2003. And in 1997, Rich's (an American food manufacturing corporation with an international market) began selling a premixed, liquid dairy product called Tres Riches, a soak for food-service tres leches cakes.

An additional Internet revelation was that I'm not the first to wonder about the origins of this dessert. In 1999, Patricia Sharpe of Texas Monthly discussed tres leches in a feature about Tex-Mex food. Information from that article has been repeated ad infinitum on Internet sites, often not attributed to its source (shame, shame). And, for all practical purposes, no one has shed any further light beyond Sharpe's 1999 work.

Sharpe posited the following: Pastel de tres leches became popular in Latin America about a generation ago, it has evolved into a standard celebration cake there, various regions of Mexico claim it as their own (as does Nicaragua), and it began appearing on U.S. menus only recently. She quotes Roberto Santibanez (Mexico City native and former chef at Austin's Fonda San Miguel), who surmised that tres leches was a product promotional recipe distributed in Latin America, perhaps by a canned milk or electric mixer manufacturer.

Well. All good, but I wanted more. Who circulated this recipe around Latin America and when? Where did it come from? Recipes don't just appear out of nowhere – there are always prior sources, roots in traditional dishes. And when did tres leches jump the border and get so popular here?

The most obvious source for disseminating the recipe had to be the manufacturers of evaporated and condensed milk (two of the tres leches). I learned that Nestlé (a major canned milk producer since 1875) established manufacturing plants in Mexico right around World War II. According to Nestlé brand manager Nancy Lopez-Pedrosa, the company has routinely published recipes on the can labels. A call to Nestlé Mexico corroborated that tres leches was indeed one of those recipes, but they could not say exactly when it first appeared. They promised to get back to me, but I'm pretty convinced that this explains how tres leches spread around Latin America a generation ago – via the readily available canned milks.

In case you were wondering, evaporated milk is fresh milk from which 60% of the water is removed before the milk is homogenized, fortified, canned, and sterilized. Condensed milk is a mixture of 55-60% whole milk and 40-45% sugar heated until 60% of the water evaporates, resulting in a sweet, viscous milk syrup. Both products were developed in the 19th century as means to deliver milk nutrients without refrigeration, and, like many now-common convenience foods, they were first adopted by the U.S. military.

I couldn't buy it that Nestlé marketers just invented tres leches in the 1940s. Sure, they used it to sell their products, but where had they gotten the idea? It occurred to me that pastel de tres leches might fit nicely into the European tradition of "soaked" cakes: baked goods drenched in syrups and custards. Think British rum cake, trifle, fruitcakes, or Italian zuppa inglese and tiramisu. And what about bread pudding and even French toast? 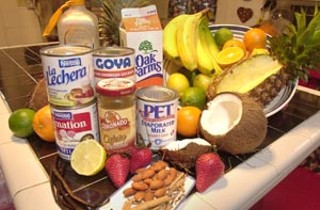 Now, the European influence on Latin American cooking is well known; I was getting somewhere with my theory. All I needed was some pre-Nestlé recipes in Mexico to bridge the gap from traditional European desserts to modern tres leches.

Roberto Santibanez (currently the culinary director of the Rosa Mexicano restaurants in New York) provided the next clue. He remembered a dish that his grandmother had made, from the state of Tabasco. Torta de leche (milk cake) is cake batter poured into a pan of sweetened scalded milk, baked, and served floating in its milk sauce. This prompted me to hit the Mexican cookbooks again to seek out similar soaked-cake desserts that might have different names than tres leches.

And guess what I found. In The Mexican Gourmet, Maria Dolores Torres Yzabal says that antes (bread soaked in wine and layered with milk custard and fruit or nuts) came to Mexico in the 19th century. New York restaurateur and author Zarela Martínez documents Oaxacan recipes for Sopa Borracha and Ante de Almendra, two soaked cakes. In The Taste of Mexico, Patricia Quintana opines that tres leches comes from Sinaloa, and she provides a colonial-era recipe for Viceroy's Cake: sherry-drenched layers of cake, custard, fruit, and meringue.

I am convinced. Pastel de tres leches surely is descended from a long and respectable tradition of desserts that extends back through colonial Mexican history to medieval Europe. Think of that the next time you take a sweet bite, redolent with condensed milk.

Speaking of bites, the last part of my investigation is about how and when tres leches became such a desired, fashionable dessert, available all over Austin and the rest of the state. I started asking local food people what they knew.

When growing up in Mexico City, Chronicle contributor Claudia Alarcón recalls tres leches primarily as a bakery cake, ordered for birthdays and special occasions. Lucinda Hutson, El Paso native and Austin cookbook author, remembers it as "sort of the craze about 15 years ago. ... It was really popular at Mexican parties and weddings and came off of the condensed can recipe, más o menos."

A Laredo contact says that tres leches has become standard fare for "ladies" events there like afternoon teas, quinceañeras, and engagement parties, and describes it as "overzealously lactating Victorian sponge cake with approximately 17 times the calories." Terry Conlan, Lake Austin Spa chef and author of Fresh (who makes a low-fat tres leches with coconut milk and caramelized bananas), noticed it on fine-dining menus in Texas before seeing it in neighborhood Mexican restaurants. He says it's one of his most popular spa desserts.

Miguel Ravago of Fonda San Miguel feels that most Austin tres leches can't really compare to those in Mexico, sprinkled with cinnamon, garnished with fresh fruit, and frequently served without the whipped cream or meringue. He periodically offers a version at the restaurant.

Mark McCann, Austin foodie and self-proclaimed tres leches fanatic, says, "I first ate it in Guatemala about 25 years ago and fell in love with it. It's a great finish for spicy food. I've probably eaten 10 or 12 different tres leches around town. My favorite is at the new El Chile restaurant on Manor Road – now that's a piece of perfection on a plate."

The consensus among everyone I asked is that there's no recollection of this dessert being seen much in Texas before the mid-Nineties. So what cultural confluence of flavor and fashion occurred that caused tres leches to become the new tiramisu of the millennium, still going strong?

I don't suppose there are hard and fast answers, but I can hazard a few guesses. First, there's the fashion thing. Foods, like celebrities, can be famous for being famous, and we want them because everyone else does. And then we don't. (When's the last time you ate Jell-O?) Another consideration is the ever-increasing dining sophistication of the restaurant-going public that travels, experiments, and becomes accustomed to enjoying foods once considered exotic or strange.

But I think the primary reason for tres leches' popularity has to do with simple demographics. The population of this state is now 52% Hispanic, and that influences us all: what is available, what is marketed, and, through exposure, what we learn to like. In a 2003 analysis of new ice cream flavors in the Dairy Foods webzine, Donna Barry writes that "It seems the tastes of the ever-growing ethnic population in the U.S. are affecting the overall flavor preferences of all Americans."

I believe Donna and the dairy industry are right. After this exercise in culinary history, I now see tres leches as lots more than just a rich dessert. It's a little cultural ambassador that crossed Europe, crossed the ocean, and then crossed the border, adapting as it went. A reminder that food, in addition to how good it tastes, is never just food. Now, where's my fork?