True to Their (New) Roots 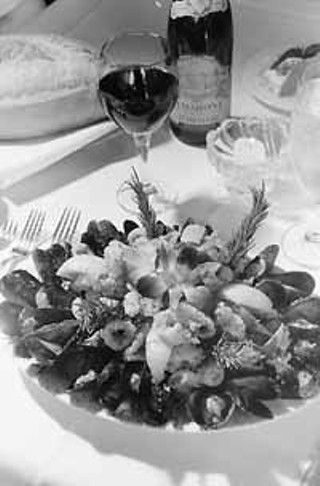 It's amazing how often the following topic comes up in casual conversation: "Why doesn't Austin have more good Italian restaurants?"

The question usually arises as the speaker nostalgically recalls the transcendent manicotti of their native New York or a memorable meal in one of the East Coast's union-mandated "Little Italy" sections (Boston, Philly, Pittsburgh, Baltimore, etc.). It's traditionally been one of the most discussed vacuums in the local dining scene, and its answer is also one of the most obvious.

The short answer is that Austin lacks the most important ingredient for a thriving Italian food culture -- actual Italians. Instead of being an immigrant-packed port city, Austin is a classic latter-day Sun Belt boomtown. Rather than emerging from a Neapolitan grandmother's kitchen, new restaurants commonly crop up in cost-efficient strip centers constructed to serve the rapidly developing outlying communities. In Austin's case, the "New Neighborhood" is a suburban community with "spacious living from the $90s."

Austin diners yearn for pasta variations and wood-fired pizzas with a feel of the mythical "Old Neighborhood" -- preferably within a five-minute drive of home. And in a classic case of Adam Smith's "invisible hand theory," local restaurateurs have responded with new-school Italian establishments such as Alan Lazerus' successful Vespaio on South Congress and the newly opened Siena.

Also among this number is Bellagio Italian Bistro, a family-run Italian restaurant near the intersection of 2222 and Loop 360. Just inside the entrance of the Jester development, Bellagio offers a deep and very reasonably priced menu of fresh pastas and specialties that favor the traditions of Northern Italy rather than the Italian-American school of cooking.

Since opening in Jester's upscale strip center 10 months ago, Bellagio has developed a steady following from the surrounding northwest neighborhoods and nearby Lake Travis. Even during traditionally slow weekday nights, walk-in diners are replaced among a mostly reserved dining room.

The Loiacono family, former owners of the local Baglery chain, apparently believe in two cornerstones of traditional cuisine -- fresh ingredients and sizable portions. They pride themselves in making upward of 30 different pastas on the premises -- from bright spinach fettucine to rippled radiatore and ribbon-edged tagliatelle.

And in the true style of the zealous grandmother, Bellagio's serving sizes for both starter and entree courses are absolutely gargantuan. The familiar routine of ordering individual appetizers almost guarantees take-out containers for all but the biggest eaters. Diners locked in a childhood habit of "cleaning the plate" will most likely be stuffed before the entrees hit the table.

The kitchen's appetizer treatment of Mussels Geneovese ($8) illustrates this abundance perfectly. For a starter portion, the shallow dish contains three dozen sauteed mussels covered in a thin pesto-like sauce of fragrant basil, olive oil, and plenty of garlic. Crispy strips of prosciutto and a healthy scattering of Romano cheese add texture and richness to the dish. Shellfish fans who bemoan the mussel's low volume-to-meat ratio will be more than satisfied by the sheer number of them that are served. The sauce -- rich, herbal, and hearty -- pools at the bottom of the plate and begs for bread-sopping or shell-scooping.

Another appetizer, Melanzane Cipriani ($8), creates a layered Napoleon of crispy fried eggplant, tomato, prosciutto, mozzarella, and pesto. Essentially a trio of vegetable-based pizzas, the Melanzane avoids the sogginess common to eggplant-based dishes. The individual medallions of fried eggplant form a solid, crisp foundation for the flavors and textures of the other ingredients.

From the separate menu heading of "Pizza Rustica," the surprising Potati é Pancetta pizza is substantial enough to be a meal in itself. The bready crust is layered with thin slices of potato, cured pancetta, roasted garlic, and a three-cheese blend with a pungent touch of asiago. The sweet richness of caramelized onions adds considerable depth to the range of powerful flavors. The crust, though house-baked, is lackluster and lacks a distinctive crunch or fresh-baked texture, and doesn't quite live up to the promise of the toppings.

Two of the pasta entrees continue the theme of "good and plenty" but in different manifestations. The chicken scapetta ($14) features sauteed chunks of chicken breast with slices of fennel-heavy Italian sausage and multicolored strips of sauteed bell pepper. The brown sauce of garlic, shallots, and two kinds of wine (sweet marsala and burgundy) give life to the normally bland poultry, and work well with the pasta selection -- a bed of tomato rotelli. The scapetta allows for considerable variety on a fork-by-fork basis -- the flavor profile of the dish could vary considerably given the contents of every bite. A sweet bite of bell pepper and savory sausage differs significantly from a morsel of wine-soaked chicken and tender pasta spirals. Pick, choose, and repeat.

Variety is also a key to a house fish specialty, the Sicilian Seafood Platter ($22). A mountainous assortment of shellfish -- shrimp, scallops, mussels, and a few clams thrown in for good measure -- tops a layer of spinach tagliatelle. The platter is then topped with a peppery tomato broth (similar to an arribbiata sauce) and garnished with a handful of tender fried calamari. Each of the individual shellfish are cooked to the proper doneness -- no mean feat in a busy kitchen line -- and lend themselves to plenty of flavorful mixing and matching.

The non-pasta end of the Italian spectrum is covered by the house's special baked risotto ($14) -- a sizable portion of creamy arborio rice served in a thin casing of peeled eggplant. The risotto itself is a thoroughly hearty dish -- thick with cheese and flavored with earthy mushrooms, leeks, and unsmoked Italian bacon. A word to the wise: As the dish arrives at the table, the presentation -- described on the menu as "a casserole of thinly sliced eggplant" -- can be a bit surprising. (Thin strips of eggplant, it turns out, bear a remarkable resemblance to anchovies.)

The décor and atmosphere of the room is fitting to its location in Jester's "upscale strip center" -- and that may be Bellagio's biggest disappointment. Clearly the Loiaconos are dealing with certain prefabricated realities of strip center real estate (huge windows, acoustic tile ceilings, parking lot view), but the room has a certain sense of "tacked on" institutional design. Huge gilt-framed paintings hang on characterless sheet-rock walls. Pieces of antique furniture seem oddly out of place. Concrete floors, plate glass windows, and the single-room dining layout can make for noisy dining at peak traffic hours.

But in a way, Bellagio's strong kitchen and somewhat compromised atmosphere makes it a nearly perfect representative of new-school Sunbelt Italian establishments. A family does its best to adapt to the circumstance and practices of its surroundings. It may not be Little Italy, but Bellagio will do well in its chosen (and booming) "new neighborhood."