How Erika Thompson Keeps Her Cool While Scooping Up Bees 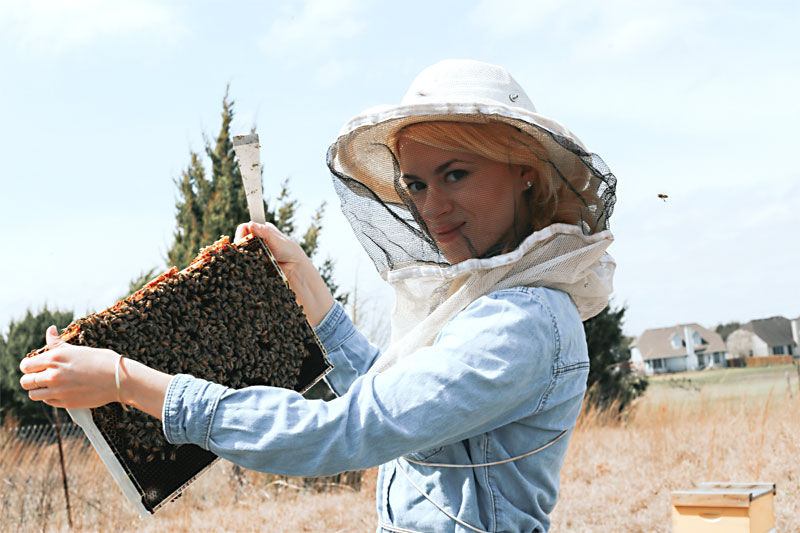 In August, a video of beekeeper Erika Thompson quickly amassed over 20 million views on TikTok. The clip featured the Austinite in a potentially terrifying situation, scooping gobs of buzzing honey bees with her bare hands from an invaded Cedar Park compost bin. As the owner of Texas Beeworks, she rescues unwanted hives from Austin-area backyards – commonly compost or water meter boxes – to thrive at her own apiary east of the city.

The intoxicating contrast of Thompson's viral shorts is her absolute calm amid the buzz. Rather than a ballooning white suit, she casually wears leggings and a button-down. Without an overhead veil or gloves, bees crawl on her fingers and engagement ring.

"People assume it's completely chaotic inside a beehive, but it's incredibly meditative," she explains. "It forces you into a Zenlike state, thinking deeply about how every action is going to affect the colony. You tune out everything around you."

“This is what I should be doing on this planet, and when you find that purpose, there’s a natural calming effect.” – Erika Thompson

Thompson's narration is equally meditative, the practiced cool of someone who taught classes on bees pre-COVID-19. In videos across YouTube and Instagram, she explains how puffs of smoke help mask the alarm pheromone bees communicate with. It's perfect pandemic content – soothing, visually engaging, and educational.

"Bees, like any other animal, pick up on the energy you're bringing," she says. "It's a privilege to go into their hive to view this amazing structure they've created. Approaching with a sense of calm and gratitude is really important, but not all bee removers probably scoop bees like I do."

The most common comment on Thomp­son's videos is about her lack of protective gear. Put simply, the bee pro finds her regular ensembles are more attuned to the Texas heat than a cumbersome suit. She also says working without gloves lets her know if the insects are distressed and stinging – not ideal, considering they die afterward.

"I suit up when I need to, but I would rather read what's going on in the colony firsthand, if you will," she adds. "As a bug lover, I just love holding bees. This is what I should be doing on this planet, and when you find that purpose, there's a natural calming effect."

Thompson's comfort handling insects dates back to her Houston childhood, when her mom wouldn't grant requests for a puppy. She remembers bringing a dragonfly bedspread to her dorm at University of Texas at Austin, whereas other girls had trendier designs from Anthropologie. After college, while working as the communications director for the Austin Chapter of the American Institute of Architects, she took a beekeeping course.

She soon set up a hive in her small Central Austin backyard, checking in during lunch breaks. The former hobbyist only left her office job a year ago, and now manages millions of bees on 5 acres off the Colorado River. Unlike many beekeepers, she doesn't sell honey.

At Texas Beeworks, she finds many Aus­tinites are attuned to the global decline of bee populations and choose not to kill unexpected colonies on their property. "The Austin community is so environmentally friendly," she details. "I get a lot of calls from folks just wanting to do the right thing."

With her popular status as a virtual communications director, of sorts, for Texas bees, Thompson is actually hesitant to post more videos. Most days, she rises early, checks her hives with morning coffee, and doesn't come home from bee work until dark – purposefully limiting screen time. A September TikTok takes place at dusk; Thompson carefully unloads a rescue mission, with bees clinging magnetically to the box.

"We're around them every day and rely on them so much, but people don't know a lot about the inner workings of a colony," she says. "People love the content because of the bees, I'm so secondary. The bees are the real stars here."

"The truth is, most honey bees aren't that defensive," says Thompson. "That's a big misconception. I love showing people that while, yes, we should all have a healthy fear of these creatures, they don't necessarily want to sting you."

"I always say, 'Creatures before content,'" adds Thomp­son on managing her popular social media. "That's what's important. All of that online stuff is so secondary to the work I do every day. People are like, 'Why haven't you posted more?' I'm not going to share everything, because that's just not who I am."