They Are Not Halle Berry

But L.A.'s Hi Fashion are coming to Austin Pride to rock your butoh face paint off 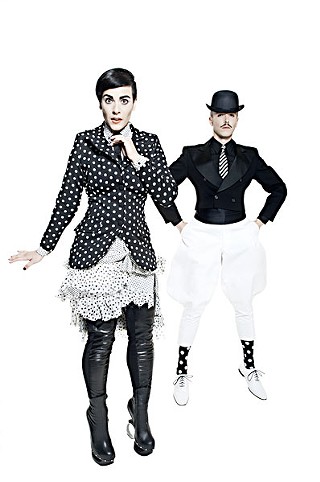 This year's Austin Pride musical lineup comes with a bevy of surprises, including a concerted effort to bring a roster of unconventional but top-notch artists – including Crystal Waters, Jane Wiedlin of the Go-Go's, Punk Bunny, Wendy Ho, and Andy Bell of Erasure – to entertain and inform our alphabet soup community. We spoke with Jen DM and Rick Gradone of the band Hi Fashion, an L.A. outfit aiming to bridge the gap between pop culture, fashion, punk rock, and queer art, and who will be playing the Pride Fashion Parade as well as on the main stage for Austin Pride 2013.

Austin Chronicle: Did you two really meet in a gay bar?

Jen DM: We met at the Pyramid in the East Village in New York. Rick totally thought I was a guy. It was dark and foggy and ...

JDM: Thank you! We were a little bit dark and foggy ourselves, but we just hit it off.

AC: Who inspired you to take this creative path together?

RG: Well Jen and I both have very varied musical tastes. For Jen, Fugazi is a big influence, and for me, I would say the Eurythmics, but we'd definitely say Deee-Lite, the Beastie Boys, Erasure, and Grace Jones.

JDM: Bjork and the Sugarcubes! Her approach to music and performance is a big influence.

RG: The way she uses her voice is something we've embraced, and certainly the way she creates a character, her persona and imagery.

JDM: We draw from a rich performance art background, from the Robert Wilson Theatre to Karen Finley, to Richard Foreman, avant-garde directors who have created wonderful images.

JDM: We seem to pass the same Butoh picture back and forth, every time we start a fresh piece.

RG: I can't wait 'til we actually make that one!

JDM: Naked and covered in baby powder with those crazy wigs!

RG: We're like a hair away from it now.

AC: So speaking of your process, is there a Haus of Hi with scores of malnourished interns waiting on your every whim?

RG: Nothing so formal.

JDM: "I Am Not Madonna" was inspired by one photo of Halle Berry on the cover of Vogue. I texted Rick about how we both had Louise Brooks hair at the same time and it just started rolling.

RG: We could have called the song "I Am Not Halle Berry." It can start with a text joke: One of us says something snarky and the other decides to rhyme with it, and it just takes off.

AC: You mentioned a background in fashion. Care to tell us about Hi Fashion's 9-to-5?

JDM: I think we should stay cryptic and mysterious on that point.

RG: If you asked me if I was working for Karl Lagerfeld, I wouldn't say no; I'd just say I was "disenKleined" to comment, except in German. And I don't speak German, so I really can't answer that.