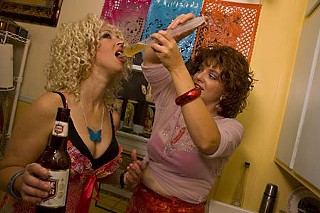 "They're so sexual, those retards." – Shasta Cola

Public access television beckons conspiracy theorists and colorful, rhinestone-clad characters alike, citizens ambitious enough to fill out the forms and start their own TV shows. This year, our readers have selected Cookin' Good With the Cola Sisters as Best Public Access TV Show.

Arcie and Shasta Cola – like two Southern, Sunday church ladies on acid, chitchattin' over spiked coffee and homemade meatloaf – bring their deliciously amusing East Texan personas to the tube. They've conversed their hearts out for the past four years, spreading their fan base like a glob o' jam over Austin, all while presenting one recipe per show, cooked in real time. Famous for "being themselves" (i.e., never appearing out of character), Austin's own hick Hilton sisters shamelessly serve up words of wisdom while ranting about the Man and rustling up some mighty fine grub.

We sat with Arcie and Shasta in the very same Jesus-happy kitchen where so much of the magic happens. That's when the Cola hit the fan.

Austin Chronicle: Tell us about your beginnings.

Shasta: We are half sisters, and we have different daddies.

Arcie: Well, um ... I guess we got started when our mother fucked different men. Our mother was very creative with her names, and all of her children have Cola names that could also mean other things. Like my name's Arcie Cola, and you think about RC Cola, but it's actually A-R-C-I-E, which is short for Arciella, which means Dawn in Spanish. Well my middle name is Dawn, so my name is really Dawn Dawn ... but I like Arcie.

Shasta: There is also a Shasta Cola that is a very well-known celebrity, um ... what do they call it, drag queen. So that's not me.

AC: What is your hometown?

Arcie: Coldspring, which is in East Texas.

Shasta: It's very woodsy, and there's vampires there.

AC: What is your guiding cooking philosophy?

Arcie: That it's easy. That anybody can do it. It's just heat and food.

Arcie: But it's true!

Shasta: Yeah, I know, but I don't want her to get mad. Maybe you should come up with something else.

Shasta: So easy a caveman can do it [laughter].

Arcie: I want to differentiate myself for a minute. The most important thing is to eat fresh, healthy, organic food that is minimally processed, because otherwise you're eating nothing but chemicals the Man is trying to feed you so that you will die. But not before spending hundreds of thousands of dollars in medical bills 'cause you get the cancer.

AC: Which came first, the comedy or the cooking?

Arcie: I think the cooking came first, 'cause it is a cooking show. I don't think we set out to be funny.

Shasta: I don't think that's what our fans want. I think they want to see glamour and just more of, like, our butts and our boobs.

AC: If you could have a wish list for the show, what would it include?

Shasta: Well we want some, like, clear cookin' stuff so you can see the food.

Arcie: I would just like a wealthy patron or several to give us large sums of

Arcie: No, but we can fund raise.

Arcie: It's a fine line.

Shasta: Raaght. I really want to start our own church.

Shasta: We've just wished for that! That could be a wish list thing.

Arcie: Maybe when we do Toning we'll make a little extra.

AC: Are you talking about your upcoming DVD: Toning for the Tribulations?

Shasta: It's our exercise video. It's a system for surviving the end times after the collapse of civilization.

Shasta: And were basically going back to the apocalypse when we have to go through the ... what is it ... seven years?

Arcie: You're into all that stuff, I dunno.

Shasta: It's good for all different things, but it's basically getting yourself ready to survive.

Arcie: Get strong, 'cause the only way you can get back at the Man is by not dying, 'cause he would like nothin' more than to kill you off. So it's like training for the revolution.

Shasta: Yes, it's a wearing down of the Man slowly with our Fabrice beings. But we also, like, did a lot of video around town, so it also showcases our town.