The Expedition School's Kimery Duda is out standing in her field ... 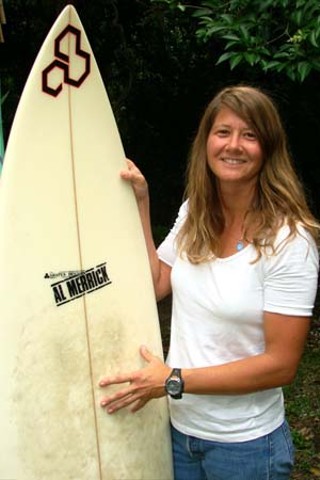 "What a contrast between a commute down the MoPac Expressway and a commute down the Lynn Canal," begins Kimery Duda, the enthusiastic lead guide and executive director of the Expedition School, relating the trek she took every day, guiding clients to the terminus of the Davidson Glacier in Alaska.

Her eyes brighten as she describes the scene from her inflatable skiff. "A perfect glass day on the water with a mirror reflection of 3,000-4,000-foot peaks of the Chilkat mountain range, covered in hanging glaciers producing waterfalls. Sometimes Stellar sea lions would follow us, or Dall's porpoise; occasionally we'd see a humpback whale in a glacier breach or look for the golf ball in the tree ... which means siting a bald eagle. We'd pull up to the beach, and that was our front yard."

For six months, Duda lived in this wonderland encampment with a crew of eight others whose job it was to guide tourists taking three-hour shore excursions from massive, pleasure cruises passing through the area. "You can imagine the contrast between our reality and our clients'. We wouldn't shower for days ... a week at a time. Sometimes we'd be ambitious and heat up water on a propane stove," she said, and put on the same clothes day in, day out. Carhartt's, rubber boots, and something wool, oh, and sunglasses. The people would come in satin and perfume and stiletto heels. We'd watch them land on the dirt runway, and their faces were either like, 'Oh, I'm about to die,' or 'This is the coolest thing ever!' and away we'd go.

"It was that time in between having them on the bus and seeing them act like 4-year-olds looking out the windows in awe. It was incredibly humbling to see their reactions." Some of the downside of this culture shock, Duda recalls, is the disconnect for some of the clients. "Once, I got asked, 'Is this where they get the ice to make totem poles?' Most cruises meet every need: heated swimming pools, access to food 24/7, elevators, it's a floating mall, catering to thousands. That's fine for some people. We began to look forward to one small, interactive cruise that would come in once a week. They'd have professors lecture. The difference in the caliber of questions was clear. Their curiosity made us want to take them off the beaten path and deeper into the experience. They were so intellectually turned on."

Duda's journeys eventually landed her at a teaching gig at St. Stephen's Episcopal School in West Austin, where she leads trips to surf in Costa Rica, snowboard in Colorado, and this year's senior trip to Rio Frio. "Kids don't have expectations. Experiences like these touch their hearts. They want real experiences."

As a result of her extensive background setting up trips to introduce folks to the wonders of the natural world, Duda founded the Expedition School, offering tours like the ones she plans for her high school students but for teens and adults alike. "More and more, people want to affiliate with environmentally friendly businesses and travel. And more and more, people want real experiences," she says.

"My intention behind the school is to share the feeling I had while surfing in the Gulf. I looked down, and there was a Kemp's ridley – one of the most endangered creatures in the Gulf," she snaps her fingers. "At that moment I knew what I wanted to do."

And these days, most days, you can find her out in the field, doing just that.