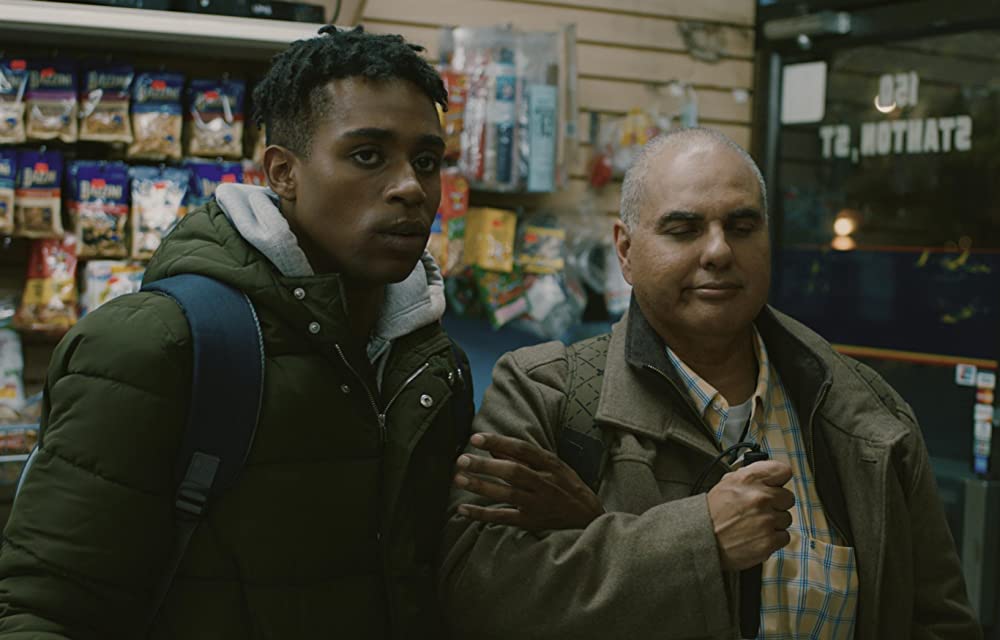 Steven Prescod and Robert Tarango in "Feeling Through"

If you make time for one Oscar-nominated narrative short this year, make it "The Present." It’s an honest and affecting look at the dehumanization of Israeli apartheid filtered through the lens of a Palestinian man on a simple mission to buy his wife an anniversary gift. Yusef (Saleh Bakri) guides his daughter Yasmine (Mariam Kanj) through their West Bank shopping trip, desperate to preserve her innocent joy. While Yusef’s impossible task gives "The Present" its anguished through-line, it’s Yasmine’s quiet, childlike resilience that makes this the most memorable film of the slate.

"White Eye" continues criticism of the Israeli state, this time focusing on anti-Blackness and xenophobia. A quibble between an Israeli man and an Eritrean immigrant over a stolen bike escalates into something the Israeli never intended but should have seen as inevitable. Shot in one take, the film is tense and painful but never melodramatic, revealing the simple facts of life for overpoliced communities.

In "Two Distant Strangers" a young Black American man gets murdered by a cop, wakes up, and endures it all over again in an infinite time loop. The film is necessarily candid about how addressing police brutality takes more than just “having conversations,” but the Groundhog Day-esque premise creates a gratuitous level of violence that ends in political confusion. At risk of spoiling too much, the film ends with a truly bonkers needle drop: Bruce Hornsby’s “The Way It Is,” but stripped of its Civil Rights lyrics, leaving behind only a bouncy Eighties chorus that feels dissonant with the sheer quantity of blood we see spilled in just 30 minutes.

"The Letter Room" is similarly confused. Oscar Isaac plays Richard, a prison officer trying to do some good for the incarcerated people he works around. Isaac delivers the bumbling charm that the script forces out of his character, but it’s ultimately a dark comedy that makes no use of its darkness. When someone bluntly asks Richard why such a hero would “work at an institution that kills people,” he doesn’t have an answer. More importantly, neither does the film.

Just as "The Letter Room" might have benefited from centering one of the marginalized characters it comments on, "Feeling Through" would have done well to give the role of the protagonist to Artie (Robert Tarango), a deafblind man trying to get home in New York City. Still, this one at least keeps consistent core values. A homeless teenager named Tereek (Steven Prescod) finds Artie and reluctantly spends the night trying to get him on the right bus. By the end, Tereek’s perspective veers too far into sentimental inspiration-porn territory, and it would have been more exciting to follow Artie himself. But still, billed as the first actor from the deafblind community to ever star in a film, Tarango gives a confident, layered performance deserving of an Oscar on its own.