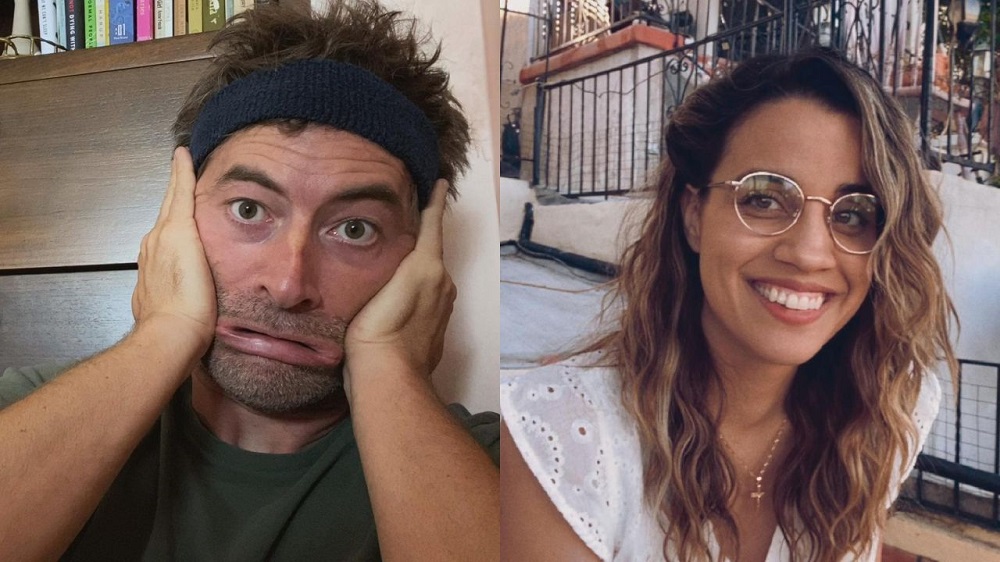 With as much grief as we’ve all processed over the last year, and with how much of that grief we’re forced to express through screens, it’s hard to imagine a Zoom-shot pandemic movie could be even remotely refreshing. But in her debut feature as a director, Natalie Morales proves otherwise. Language Lessons finds that, because of the profound value of a human life, even days on end of more of the same still contain something original.

Morales plays Cariño, an online Spanish teacher who’s been sprung on Adam (Duplass) by his husband, Will (Terry), as a surprise gift. Adam’s only marginally interested in these one-on-one lessons (especially once he learns that Will bought 100 weeks of them), but after an unexpected tragedy, Cariño becomes one of Adam’s only constants. Early, too early in their student-teacher relationship to be appropriate, Cariño witnesses the ugliest, rawest side that Adam has to offer. So when her own personal problems accidentally spill into their time together and any sense of healthy boundaries evaporates, the two have to evaluate their places in each other’s lives – are they even really in each other’s lives at all?

Morales and Duplass achieve heartwarming chemistry in remarkable speed given the screen-bound nature of the friendship they’re performing. But it’s a realistic side effect of weathering massive tragedies in each other’s blue-light presence. Duplass’ awkward but impressive Spanish skills are almost chilling in their emotional resonance, but Cariño begins to resist this beauty, refusing to wear her heart on her sleeve in the same way, though Morales’ nuanced, wide-eyed performance betrays that instinct. It’s a strength of the screenplay that Morales and Duplass allow these characters to relish in their cravings for connection and bring such warmth to the screen while still cutting back and understanding that real adult friendships are never that easy.

The film gets heavy-handed about its premise sometimes, exaggerating the online-ness of it all with artificial glitches and voice modulations, but beyond that, Language Lessons is gorgeously, uncomfortably real. The possibilities and limits of platonic love are brought to necessary visibility in the wisdom of Morales’ debut.

A version of this review ran as part of our South by Southwest 2021 coverage.

Zola
Incisive drama explores the story behind the infamous tweetstorm