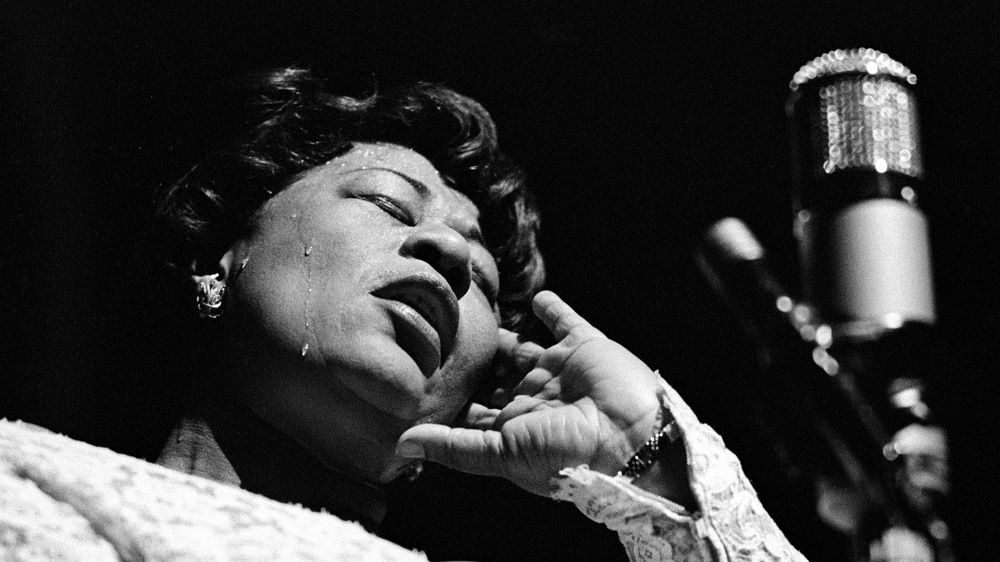 Ella Fitzgerald: Just One of Those Things

Once upon a whitewashing, the instantaneous and sustained genius of Ella Fitzgerald read as a musical Cinderella story: A 16-year-old girl from Harlem (originally Virginia) debuts at the Apollo Theater’s inaugural open mic night without ever having performed in public and walks off a star for life. “She shut us up so quickly, you could have heard a rat piss on cotton,” cackles a peer there that night in 1934.

According to Ella Fitgerald: Just One of Those Things, “Mama Jazz” (1917-96) went on to underwrite (so to speak) the Great American Songbook by becoming the first singer to treat it as such. Fitzgerald’s girlishness on debut smash “A-Tisket A-Tasket” two years later – so crisp and fresh and bright – matured into a command that admitted her into the boys bebop club at Minton's in the Forties. Scatting vocal melodies follows the rise of the human larynx, but quoting pop songs at punk tempos – 40 tunes in her famously documented take on “How High the Moon” – notched a pioneering first.

“Ella was doing something that hadn’t been done before, not at that level,” attests hypnotist Brit Laura Mvula. “She could solo using her voice to the same level, with the same ease, that a trumpeter or saxophonist could.” Fellow islander Jamie Cullum gives equally disarming testimony, while Patti Austin hopefully holds an honorary Ph.D. in music somewhere. Just One of Those Things checks off all the stream-age doc boxes: unheard audio, unseen home movies, color from family (son Ray Brown, Jr.), collaborator-peers (Kenny Barron, Tony Bennet), and celebs (Marilyn Monroe). By the time the sleek 89-minute biography peaks with Norman Granz founding Verve Records with her legitimizing (so to speak) Gershwin, Irving Berlin, Cole Porter, Jerome Kern, Duke Ellington, Harold Arlen, etc., you’re queueing up Ella Fitzgerald Sings the Johnny Mercer Songbook from 1964. “People did not take these songs seriously before Ella,” someone says. Fourteen Grammys, the Presidential Medal of Freedom, and six decades at the top of her profession – Hall of Fame arc. Except for the part where her mother dies from a car wreck when she’s 15, she’s abused by her stepfather so she runs away, then gets shipped off to reform school where she’s beaten, and finally escapes to live homeless on the streets until she auditions at the Apollo.

Narrator Sharon D. Clarke, who takes a starring role here, states it plainly enough: “For kids like Ella, the jazz music and the dancing are escape from lives shaped by poverty and racism.” Once she’s revered by anyone with auditory function, her fiscal standing improves but not the subhuman treatment endured by any Black performer throughout most of the 20th century – here explained lovingly by Smokey Robinson. Such as Granz having to buy her house because as a Black woman she couldn’t purchase her own in Beverly Hills. Nor would said town let her perform until her No. 1 fan Marilyn Monroe spoke up. Finally capping it off, she lost both legs to diabetes. Cinderella never went through any of that. Then again, she never sang like Ella Fitzgerald, a candle in the wind by any measure.

Ella Fitzgerald: Just One of Those Things is currently available as a virtual cinema release. Choose from:
• AFS Cinema (Tickets here)

Ella Fitzgerald: Just One of Those Things, Leslie Woodhead