Over the past decade, Uncork’d Entertainment has carved out a niche in Hollywood on the direct-to-video and streaming market. In perfecting a formula that includes straightforward loglines with third-tier celebrities – they are perhaps most famous online for mainstreaming Robert Kovacs, a Charles Bronson lookalike who has picked up where “Il Brutto” left off – Uncork’d has found success in delivering a brand of low-low-low-budget action and horror movies for Redbox audiences across America.

In this regard, A Clear Shot represents something of an ambitious project for the company. Based on the largest hostage situation in American history – the 1991 crisis at a Sacramento electronics store – Nick Leisure’s latest film attempts to find contemporary relevance in its depiction of media-driven crime and the American immigrant experience. Gomez (Van Peebles), a hostage negotiator with a drinking problem, finds himself facing off against Loi (Hao), a struggling first-generation immigrant on the outside of the American dream looking in. As the day unfolds, Loi and Gomez both struggle to overcome the more violent influences of their accomplices in the hope that a peaceful resolution can be found.

Given the other titles in the Uncork’d oeuvre, it should come as no surprise to discover that A Clear Shot exists in a constant battle between its ambitious narrative and its direct-to-video instincts. For every moment of attempted poignancy, we must slog through an unwelcome romantic subplot, or a scene of alpha-male posturing between Gomez and his fellow officers. There’s a levity to Leisure’s script that seems at odds with its source material. Perhaps lacking the courage of its convictions, A Clear Shot doubles back into familiar C-movie tropes to keep the audience entertained.

The whole thing might’ve held together with more consistent character work. Ignoring the suggestion that the 63-year-old actor might be playing an inexperienced cop, the elder Van Peebles brings plenty of heft to a middling character. Each other character, though, is a question mark. Without the benefit of backstories or desires, most of the faces we see on the screen seem to exist only to move the plot along. The script’s worst offenses are reserved for the gunmen, who – despite a welcome series of flashbacks – mostly scream at the hostages or at the police in broken English. Just because the characters exist in 1991 does not mean their onscreen representation must be anchored in that year as well.

A Clear Shot wants to draw comparisons between different immigrant cultures and the way white America chews up and spits out these lives. It wants to tell a harrowing story of decent people who were backed into an economic corner. But in the end, this ambition only serves to highlight the distance between this film and even the worst Netflix original feature. And while it might not seem fair to dock a feature for trying harder, well, such is the world of direct-to-video releases we live in. 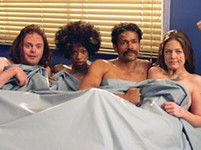