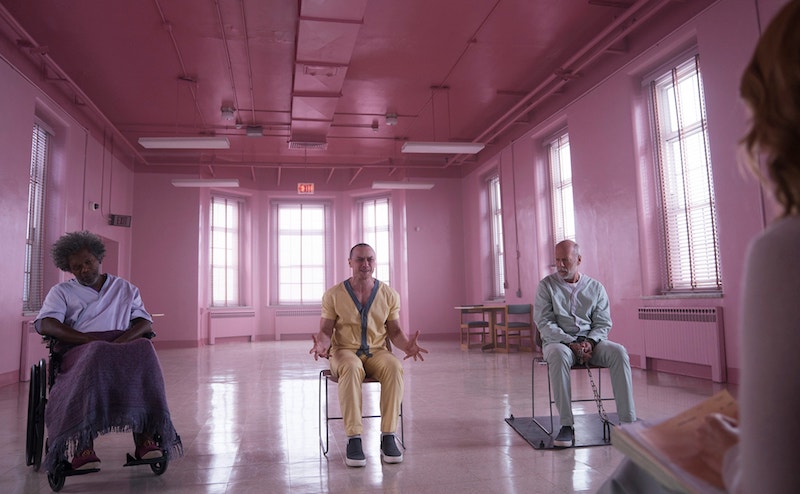 Unbreakable, M. Night Shyamalan’s follow-up to his 1999 game-changer The Sixth Sense, remains the director’s most nuanced, intellectually engaging, and pop culturally intuitive film to date. Tonally, if not totally, unique in the annals of superhero movies when it was released in 2000, it posited an irresistibly intriguing query: What if these so-called supermen and their villainous nemeses actually existed in the real world, unseen and unknown, even to themselves? Picture Clark Kent forever oblivious to his dime-comic destiny or Bruce Wayne working a grinding day job while propping up a teetering marriage sans Batsuit. Unbreakable preceded by eight years the Marvel Cinematic Universe we now find ourselves in, and predated the titanic cultural upheavals of 9/11 and endless war, Web 2.0 and the 24-hour bad news barrage, and our current age of endless anxiety. It was a tantalizing tale well told and a high point in co-stars Willis' and Jackson’s careers. Even better, it was a one-off cinematic thought experiment with no need for a sequel (or five). Or so the story went, right up until the final shot of Shyamalan’s surprise hit Split two years ago.

Glass is the capstone to this sneak-attack trilogy. If you haven’t encountered and absorbed the two previous films, then you’d be well advised to watch those before taking on Shyamalan’s latest. Or, better yet, just skip this disappointing denouement altogether and be done with it. Cobbled together on what appears to be a very low budget, Glass shatters under the weight of too many comic book allegories-cum-history lessons, weirdly abrupt plot machinations, epically puny bouts of brawny fisticuffs, and a third-act bit of outright what-the-fuck-ery that gives even the lamest deus ex machinas a bad name.

Glass is set for the most part in a forbidding, Victorian-era psychiatric facility that makes Halloween’s Smith’s Grove Sanitarium look like a model of high-tech, insurmountable security. The Shyamalan scripted story reunites Unbreakable’s sorta-supermensch David Dunn (Willis, stern) with the physically frail mad-genius villain Mr. Glass (Jackson, wacky) and then adds Split’s dissociatively disordered "The Horde" aka Kevin Wendell Crumb (McAvoy, hopelessly talented) into the often bewildering proceedings. Dr.-of-something-or-other Ellie Staple (Paulson) has somehow corralled these somewhat super-people into shackles with the stated aim of convincing them that they’re all simply delusional, and can be cured with little more than some group therapy and a laser to the forehead. Shyamalanigans ensue.

Glass is a minuscule epic with aspirations to be so much more than what it is, which is why it smarts so, watching it as a fan of comics, heroes, and the occasional M. Night movie. Shyamalan’s meta-conversation with a nowadays superhero-saturated audience feels overbearing and rote. He’s got loads to say about the definition of superheroics, sacrifice, and human potential in general, but Glass is hobbled by the director’s tendency to overthink his own ideas and then expound upon them, via his characters, to the point of no return box office. It’s proof that an ambitious, almost-auteur can be too smart for his own good while simultaneously being downright silly (see also: Lady in the Water). That’s the death knell for what might’ve, could’ve, should’ve been a genre classic that instead leaves you repeating the words “If only … if only.”