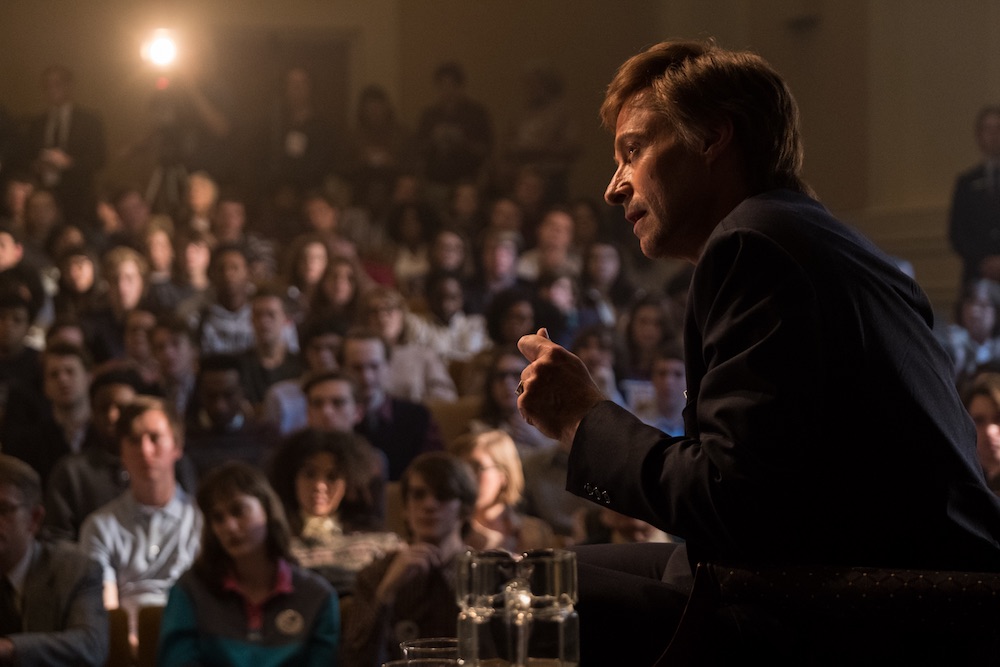 Even though Jason Reitman’s new film The Front Runner revisits politician Gary Hart’s failed campaign to become the Democratic presidential candidate in 1988, this endeavor should not be mistaken for a biopic. We learn just enough about the progressive candidate to make the story’s events from 30 years ago understandable. Reitman’s objective, however, seems to be the recontextualization of the meaning and consequences of Hart’s downfall for a new era.

Working from a screenplay he wrote with Jay Carson and Matt Bai, which is based on Bai’s book All the Truth Is Out: The Week Politics Went Tabloid, Reitman is clearly addressing post-Bill Clinton and Trump-era viewers by re-examining this story from an earlier time. The unproven sex scandal that brought down Gary Hart looks like a mere hiccup when compared with our present time in which voters elected as president a self-admitted groper and alleged philanderer and provider of hush money. Furthermore, The Front Runner dangles in front of viewers the specter of what might have been had not Hart’s campaign been cut short after three weeks in 1983. No G.H.W. Bush? No G.W. Bush? No war in Iraq? Afghanistan? Implicit questions arise throughout the course of The Front Runner, but Reitman (typically for him) sidesteps answers. Surely, it takes more than the sensationalism of tabloid journalism to corrode our political discourse. And now the film must also be weighed in light of the stunning revelation that appears in this November’s issue of The Atlantic that the first President Bush’s dirty trickster Lee Atwater confessed on his deathbed to having secretly set up the photo “proving” the existence of a Gary Hart-Donna Rice affair?

Nevertheless, Reitman fashions a compelling story about Hart’s campaign, complete with all the whir and commotion that the activity stirs up. Deft camerawork by Reitman’s frequent cinematographer Eric Steelberg roams though the back rooms and newsrooms where political operatives and journalists conduct their work. The film’s overlapping dialogue and seeming chaos are reminiscent of Robert Altman’s use of sound, as well as the engine driving Michael Ritchie’s The Candidate. As Hart, Hugh Jackman is good, although there’s never a complete sense of the actor disappearing into the character (this might be due more to the filmmaker’s sidelong storytelling than the actor’s skill). As Hart’s wife Lee, Vera Farmiga delivers another fantastic performance in a role that has her functioning throughout an array of situations yet telegraphing few personal feelings. (Despite weathering the sex scandal portrayed in the movie, as well as two prior separations, the Harts have remained married for 60 years.) J.K. Simmons, Reitman’s good-luck charm the director casts in all his movies, also delivers fine work as Hart’s beleaguered campaign manager. Journalists are showcased in two contrasting manners: The fictional AJ Parker (Athie) of The Washington Post is a neat and circumspect reporter who plays by traditional codes, while the scruffy Tom Fiedler (Zissis) of The Miami Herald camps out on Hart’s doorstep to follow up on a tip that canoodling is happening inside.

The Front Runner spends too much time involved in the glare of the situation rather than examining its intricacies or characters. Like many of Reitman’s films, particularly Men, Women & Children, The Front Runner is interested in the subject of privacy as mitigated by the TMI era. The character of Gary Hart, unfortunately, becomes only a means to this end.