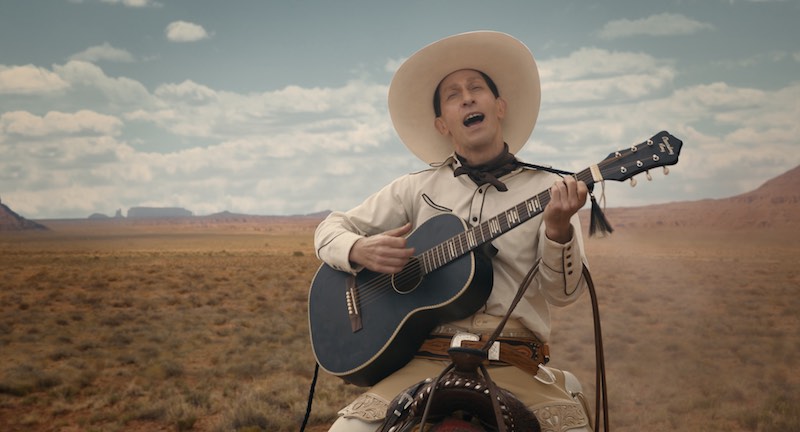 The Ballad of Buster Scruggs

Originally conceived and shot as a six-episode series for the Netflix streaming service, The Ballad of Buster Scruggs – the latest from Joel and Ethan Coen – is instead reaching theatres as a single anthology film of six episodes that is available simultaneously as a limited theatrical run and through Netflix. Although all the episodes contain elements of the Coens’ signature mix of jokiness and solemnity, the chapters unevenly grab our interest, something that might have been less striking if presented as a series rather than viewed in a single sitting.

Tim Blake Nelson appears as the titular Buster Scruggs in the film’s opening segment. Scruggs is a singing cowboy with an itchy trigger finger. Known as the San Saba Songbird, the sharpshooter is also identified as a misanthrope wanted dead or alive on posters in every town he enters. Nelson plays him as a goofball, whose fatal yet inventive aim is viewed from many angles – including from the hollowed inside of his guitar. Like most of the other lead characters in the episodes which follow, Scruggs’ tale ends with his death. The chapters move forward as the pages of a well-worn cloth book, The Ballad of Buster Scruggs and Other Tales of the American Frontier, turn.

The next story, which stars James Franco as a bank robber who slips several nooses due to dumb luck, continues in the opening episode’s humorous but fatalist vein. “Meal Ticket,” the third episode, takes a grim turn in a story about an itinerant showman (Neeson) who nightly presents a limbless orator (Melling) reciting random bits from the Bible, Shakespeare, the Declaration of Independence, and other high-minded literature. Tom Waits (perfectly cast) stars in the next nearly wordless episode about a grizzled gold prospector who desecrates a pristine canyon in his mortal quest. Zoe Kazan nails the emotional heart of this movie in “The Gal Who Got Rattled” episode in which she stars as a young woman traveling west with a wagon train. It’s the only segment that feels strong enough to exist on its own apart from the anthology. A range of emotions, and a character that echoes the role she played in Meek’s Cutoff, help turn Kazan’s episode into a thing of wonder – yet not so much that death spares its players. The final episode, “The Mortal Remains,” takes place in a stagecoach, echoing many a Western film. The riders' backgrounds and differences are highlighted along the way, with lovely performances contributed by Tyne Daly, Brendan Gleeson, Chelcie Ross, and the others. But the episode’s inconclusive ending is a let-own.

Ultimately, Buster Scruggs is lesser Coen, despite the movie bearing many of the filmmakers’ trademarks. Both silly and serious, it’s a hodgepodge in spurs, a horse opera with nothing but arias.