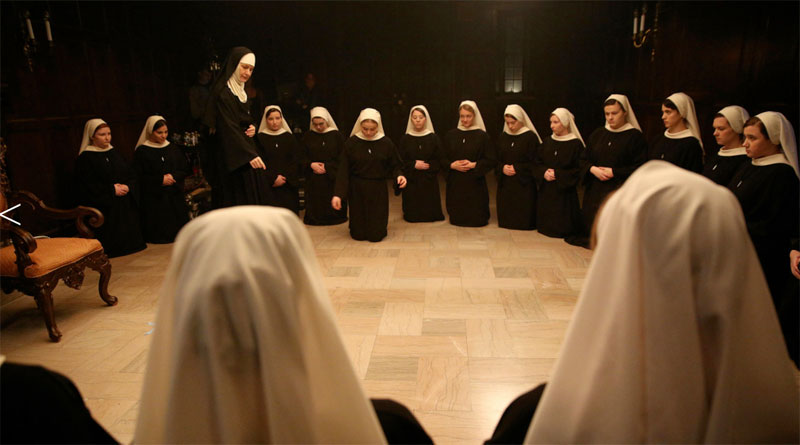 Director Margaret Betts’ superb debut feature arrives in theatres at perhaps just the right moment. At a time when the world’s organized religions, from Christianity to Islam and even Buddhism, are factionalizing along extremist, messianic lines, Novitiate recalls a bloodless but no less upsetting schism within the Catholic Church. In 1965, Pope John XXIII and the Vatican Council met and created “Vatican II,” essentially an attempt to bring the Church in line with the 20th century by declaring certain long-held Catholic rituals and liturgies no longer necessary or valid. The practice of extreme abnegation (read: self-flagellation) was done away with, mass no longer needed to be read in Latin with the priest facing away from the parishioners, and nuns were reduced in status from literal Brides of Christ to something less so. In addition, they were no longer bound by the Holy See to wear the iconic black-and-white habits that to this day immediately remind me of The Blues Brothers. Like Jake and Elwood, the Vatican was on a mission from God, only on a far vaster scale. Catholics were, to put it mildly, divided on the edicts of Vatican II. (Notably, the assassination of JFK, the country’s first and so far only Catholic president, occurred just two years prior.)

Novitiate traces the path of Cathleen from turbulent childhood to parochial school, and then to rural Tennessee’s Sisters of Beloved Rose convent, where this young nun-in-training (played as an adult by the excellent Qualley) finds her true faith tested in all sorts of ways. Fans of Monty Python, first-wave L.A. punk band Catholic Discipline, and Ken Russell’s The Devils may want to steer clear of this intimate and graceful portrait of the harshly regimented life in a convent circa 1964-65. Calling this a nunsploitation movie is akin to equating Antonia Bird’s 1994 Priest with Kenneth Anger’s oeuvre. Instead, this is a deeply respectful and serious meditation on what it meant, back in the day, to utterly and forever give one’s life over to Christ and the church. For non-Catholics, it’s a fascinating glimpse behind the veil.

Although Qualley’s Cathleen at first appears to be the dramatic focus of Betts’ film, far more interesting – not to downplay Qualley’s terrific performance – is the convent’s Reverend Mother (Leo), a flinty, old-school abbotess of the type so often portrayed in pop culture. A 40-year lifer, the Mother Superior stands guard against modernization in all forms, up to and including the debasement of the novitiates via humiliating public confessions and the occasional rope whipping. Several gradients above Torquemada, to be sure, but still a bastion of Catholic traditionalism. What makes her story arc so emotionally thrilling to watch isn’t, however, the cliched tropes of the wicked Mother Superior, but instead the way Leo, along with writer/director Betts, infuses the character with a true sense of humanity and steadfast faith in the face of a swiftly changing church. There’s a brilliant sequence in which she attempts to read aloud the Vatican II reforms to an audience of other senior nuns without weeping that nearly brought me to tears myself, so frighteningly good is Leo’s bravura performance.

Cathleen provides a necessary counterweight to the Reverend Mother’s stone-faced observance of institutional mores, but honestly, Leo owns the film. Even when she’s not onscreen, the character’s heavy, leaden love for her God by all means necessary hovers, wraithlike, over novitiates and viewers alike. 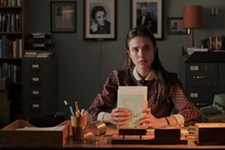