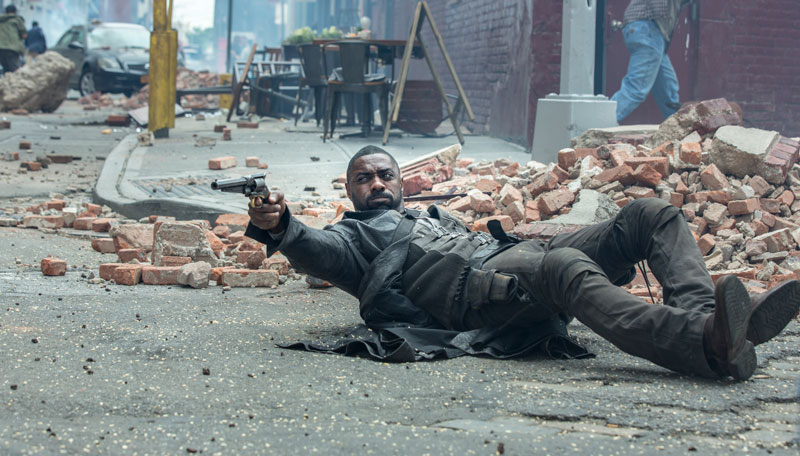 Woe be unto those who attempt to adapt a Stephen King tale from page to screen, for it is written: Only De Palma, Reiner, Darabont, and Romero can pull off that shit, homie. This eagerly anticipated movie version of King’s now 9-volume, metaphysical horror/sci-fi/Western series – started at first as an experiment, by the author’s admission – has all the necessary Kingsian bobs and bits and budget to blast the rest of the summer’s blockbusters into pink mist, but somehow manages to be the single most boring Stephen King film in ages. I’d watch a VHS copy of 1986’s Maximum Overdrive on rewind/repeat at least a dozen times before venturing anywhere near a tower not already occupied by Sauron before hitting The Dark Tower again.

The plot is borderline indecipherable to the uninitiated, but I’ll give it a go. Young Jake Chambers (Taylor), a smart, artistic kid living just outside of New York City, suffers from terrifying dreams of another world in which Roland (Elba), a gunslinger straight out of Zane Grey, tracks the Man in Black (McConaughey) as the latter attempts to destroy the titular tower that rests at the center of all realities. The Man in Black controls an army of false-faced demon-people who are abducting children from our world into his, whereby they use their “shining” abilities to attack the tower via mind-melting fireballs. When Jake stumbles into a portal to this other reality, he finds Roland the Gunslinger, the last of his kind. The unlikely pair team up, head back to Earth, and attempt to destroy the Man in Black once and for all. Then you marvel at Elba’s fluid use of his six-shooters and also how such a wealth of King’s poetic shoot-’em-up could cause you to doze off around the 30-minute mark.

Blame screenwriters Akiva Goldsman, Jeff Pinkner, Anders Thomas Jensen, and Nikolaj Arcel (who also directed) for trying too hard to cram so much of King’s original into a film format, for one. The Dark Tower would have been far better served as a multi-season HBO or Netflix series not unlike George R.R. Martin’s Game of Thrones, so ambitious and lengthy King’s continuing series has become over the past three decades. McConaughey’s overly dry performance as the Man in Black (who is also, quite likely, Randall Flagg, “the walkin’ dude” of King’s holiest of holies, The Stand) and Elba’s epically one-note take on Roland the Gunslinger don’t help matters. Taylor brings a breath of life to this otherwise moribund mega-movie, but little else can be said in favor of this misappropriation of King’s magical and exhilarating series of novels. It’s best for everyone if we all just patiently await the release of It and rewatch the first season of Stranger Things. 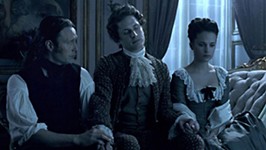 A Royal Affair
Palace intrigue, bodice-ripping, and revolutionary thought: If only this costume drama about Danish monarchs behaving badly delivered on its promise.