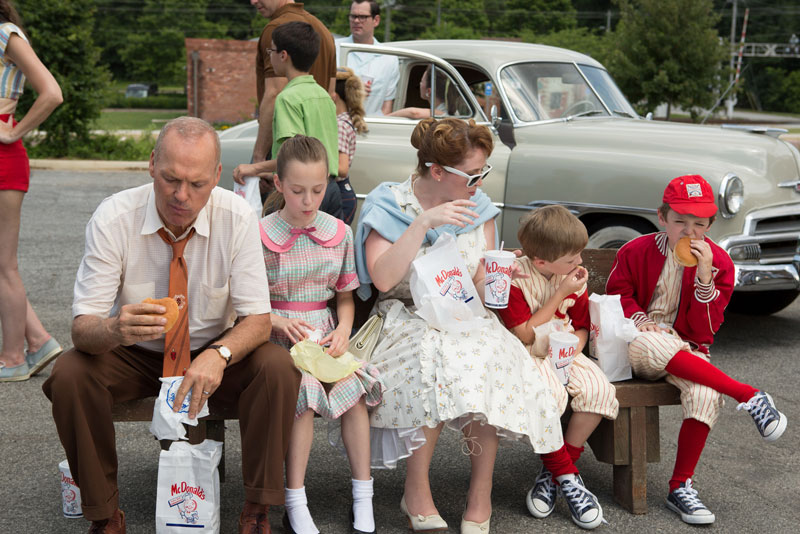 What’s in a name? Quite a lot if your name is Ray Kroc, who smartly surmised no one would want to buy a burger from a place called Kroc’s. Still, even someone as indisputably visionary as he probably couldn’t have anticipated that someday a whopping 1% of the planet’s population would be fed every day by McDonald’s, a name (so friendly-sounding!) Kroc wasn’t born to but craftily maneuvered to make his own.

A fictionalized origin story about the birth of a myth (note the singular of the title), The Founder begins in 1954, when Kroc (Keaton) was still a door-to-door salesman hawking industrial shake mixers at mom-and-pop restaurants. At night, in anonymous motel rooms across America, he works on his sales pitch, in between nips from a flask, taking pointers from a motivational record titled The Power of the Positive. Kroc dreams big, and believes in his ability to make those big dreams happen – a point further underscored when he ducks into a showing of On the Waterfront. There’s no “coulda been” in this future founder’s vocabulary.

In San Bernardino, he spies his next entrepreneurial opportunity at a burger stand run by the McDonald brothers. Kind-eyed Mac (Lynch) welcomes Kroc into the kitchen to show off the marvel of assembly-line efficiency his shrewder brother Dick (Offerman) has engineered. Convinced of the restaurant’s franchise potential, Kroc wins the reluctant brothers over with a rousing pitch: “Do it for your country. McDonald’s can be the new American church.” It’s a chilling moment – pause to consider national obesity rates – and one of the few overt instances in which the script, by Robert Siegel (The Wrestler), encourages the viewer to connect the dots between these historical events depicted and the fast-food chain’s now-ubiquity.

Mostly Siegel and director John Lee Hancock – the latter a proven proficient in workmanlike films based on a true story, including Saving Mr. Banks and The Blind Side – stick to a “and-then-this-happened” account of how Kroc savvily expanded the brand and edged the original McDonald brothers out of the business. It’s an interesting, if not entirely engrossing story. Nothing in the plotting of Kroc’s rise to power has the energy or insight as an early sequence that details how Dick lit upon his original kitchen layout – chalking it out on a tennis court, choreographing his fry cooks to pantomime production, erasing and starting over – in a zippy evocation of a mind consumed with problem-solving. There’s no equivalent in the film’s depiction of Kroc, a figure who fills almost every frame of the film, yet remains stubbornly remote throughout. An actor most at home playing devilish, Keaton’s got the last-reel Machiavellian shrug down cold. But neither he nor the filmmakers do much to illuminate the neural pistons fired from brain to bodily shrug.