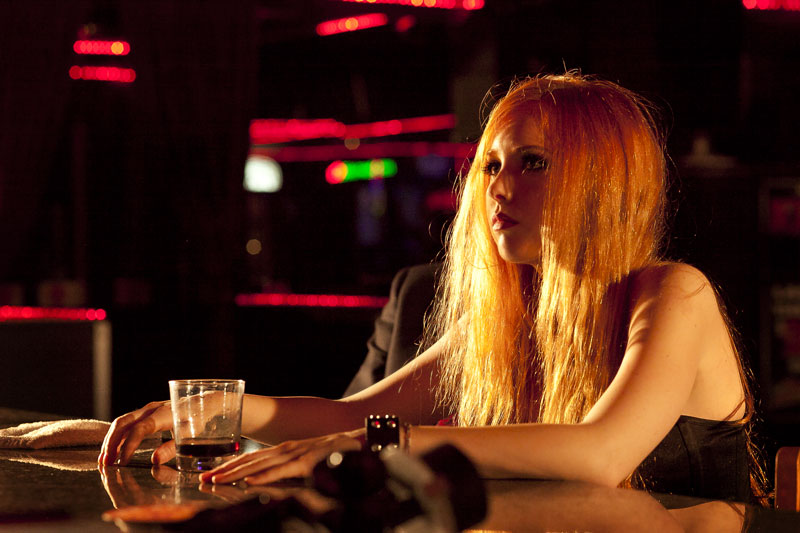 The wilted music drama A Winter Rose is a showbiz tale with a premise so improbable there’s a good chance it might inspire a reality competition show. Set in the wannabe world of demo tapes and afternoon auditions in sun-drenched Los Angeles (cue umpteenth aerial shot of the iconic Capitol Records Building), the script by William J. Branca and director Story requires you to swallow the following whole: A legendary mega-star, Rachal Love (Russell), is scheduled to perform a farewell concert in the biggest pay-for-view event in history, but discovers she has cancer and decides to launch a worldwide search for an unknown young female singer to perform on the show, as part of her legacy to the world. Gulp. Of course, she chooses an irresponsible but (so we’re told) talented fuck-up, the thorny Winter Rose (Whalen). The girl is perfect for the job. She’s an orphaned, whiskey-chugging scam artist and former prostitute who has no desire to become famous. Double gulp. Getting the reluctant and frequently soused Winter from point A (total obscurity) to point B (overnight celebrity) provides the feeble momentum of the film’s banal storyline, a narrative we’ve experienced so many times before it should be copyrighted by now. A Star Is Stillborn.

With her firecracker-red hair and penchant for bad behavior, the film’s eponymous character should blaze through the screen, but Whalen’s performance exudes zero charisma. The barely audible actress can go from a mope to a pout in about five seconds, but that’s the extent of her range here. To be fair, she gets no help from Story’s amateurish direction. His concept of framing a shot is often self-consciously film-schoolish (in two scenes, the actors are upstaged by houseplants, while in another Russell looks as if she’s about to go up in flames), and his static camerawork makes the static dialogue sound even more ponderous. (The shadows-on-the-wall production values don’t help either.) By the time the big moment arrives, it’s irrelevant whether the de-thorned Winter Rose, reunited backstage only moments before with the birth mother who abandoned her as an infant, can sing like an angel. The more important point of reference in this day and age of manufactured musical stardom is whether Blake or Adam would choose to mentor her, now that Christina is gone.