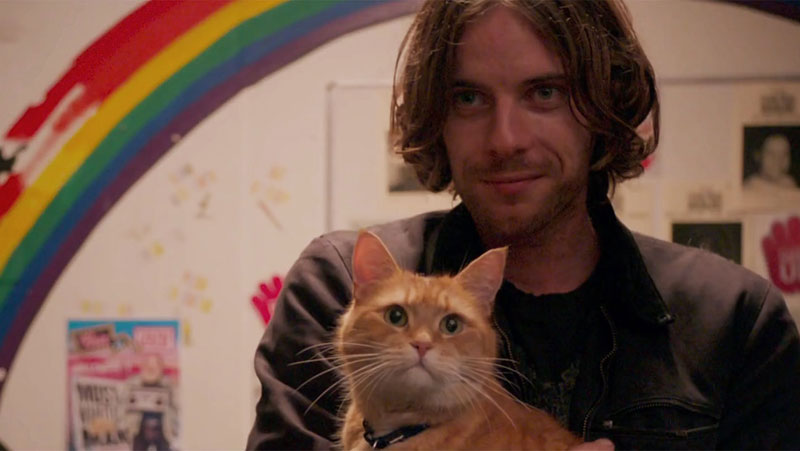 There are cat people, and then there is everyone else. Myself? I squarely fall in the former category. I adore the company of all four-legged creatures, but I have a special affinity for felines. So, a movie that recounts the true story of a recovering heroin addict, James Bowen, who forms an emotional connection with a stray ginger tabby that wanders through an open window of his London flat one night is impossible for me to resist. In no time, my eyes are brimming with tears as the easily ruffled James (Treadaway, in a moving performance) and not so easily ruffled Bob (playing himself, no less – he’s amazing!) become inseparable companions, each saving the other’s life (with both probably on their ninth). Busking outside Covent Garden with limited success, the ex-junkie quickly finds that the novelty of a cat calmly perched on his shoulders during a musical performance can be lucrative. (The two soon become a sensation on then-fledgling YouTube.) The handsome and mellow Bob doesn’t need to lift a paw to attract the curious gawkers that generously contribute to the kitty. Rather, he simply bonds with a human being in a way that defies preconceived notions. To the crowd, he’s one cool cat. To the redeemed James, his furred mate is nothing short of a miracle, the reason for rejoining the living. Cue waterworks again.

The path to redemption is predictably a bumpy one in A Street Cat Named Bob: a tentative romantic relationship with the friendly vegan neighbor (tofu is a running joke between them) whose brother tragically overdosed on drugs; an estranged relationship with the remarried father who avoids his prodigal son out of intense embarrassment; the cold-turkey kick of a methadone habit. The film is based on the international bestsellers Bowen co-authored with Garry Jenkins, so these plot points have an element of truth to them. But they just scratch the surface of those experiences, paling against the core narrative of a boy and his cat.

So, can I objectively assess the quality of this movie? Let’s say this: I watched it at home flanked by a stretched-out Riley purring along my left side; his humongous brother, Spencer, wrapped around my arm on my right side, with a chin resting on my wrist (ouch); and the fluffy petite female, Charlie (with her Kitler mustache), sitting on the pillow beside me, intrigued by the meows and half-meows frequently emanating from the screen. The unconditional love of these three critters has saved my life on more than one occasion. If you’ve ever felt the same about a Felis catus, you’ll cut A Street Cat Named Bob some slack for the same reason I did. You won’t be able to help yourself. And stock up on some Kleenex beforehand. You’re gonna need them. The Sixth Day
The opening credits tell us that The 6th Day is set “sometime in the near future … sooner than you think.” The future, hopefully, will ...