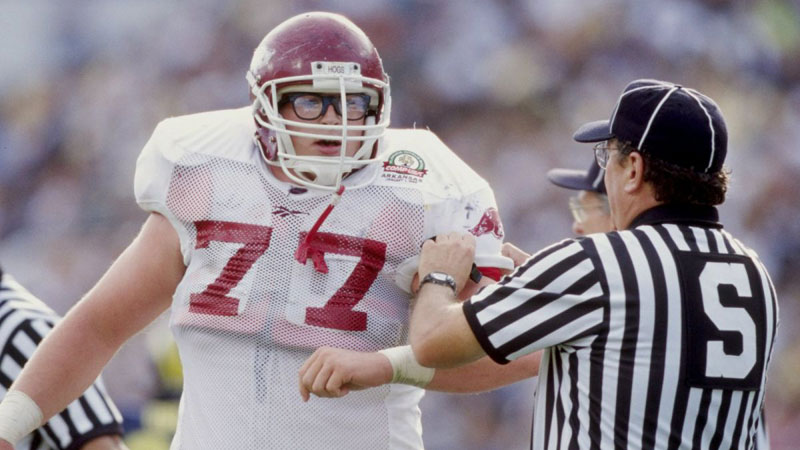 In the football biopic Greater (an unfortunately generic title, and seeing how it’s based on a biography called Through the Eyes of a Champion, a missed opportunity), we are dropped into the life of Brandon Burlsworth, a God-fearing, overweight kid whose dream is to play for the University of Arkansas Razorbacks. Does he get that dream? You better believe it, and then some. Burlsworth makes the team as a walk-on (meaning he does not have a scholarship) and then goes on to become All-American, is subsequently drafted by the Indianapolis Colts as an offensive lineman, but a tragic death in an auto accident cut his life short at 22.

And so we have a film that seemingly runs down the whole inspirational checklist of elucidating rallying cries and tears: underdog story (first and foremost); examination of faith (a life cut needlessly short and what that means); and, well, endless montages of college football (practices, the big game[s], locker room bullying, but then fierce camaraderie). David Hunt’s exhausting film runs over two hours and adheres to a kitchen-sink ethos of sports tropes and spiritual asides. I had to stop myself from actively making mental notes on where he needed to cut it. As Burlsworth, newcomer Severio wanders through the film hitting his marks, but the script gives us absolutely nothing of his inner life, his thoughts, his frustrations, his emotions, his anything. Better served is McDonough, who plays his older brother Marty, who, in a framing device, is dealing with the loss of his brother to a senseless tragedy while grappling with his own faith, as exemplified by Justified’s Nick Searcy, who plays the devil ('s advocate). He picks and prods at Marty’s faith in increasingly maladroit and meandering ways throughout the film, until Marty finally sees the light. But Greater loses its way from the get-go; you can’t root for an underdog who is sleepwalking through his own movie.