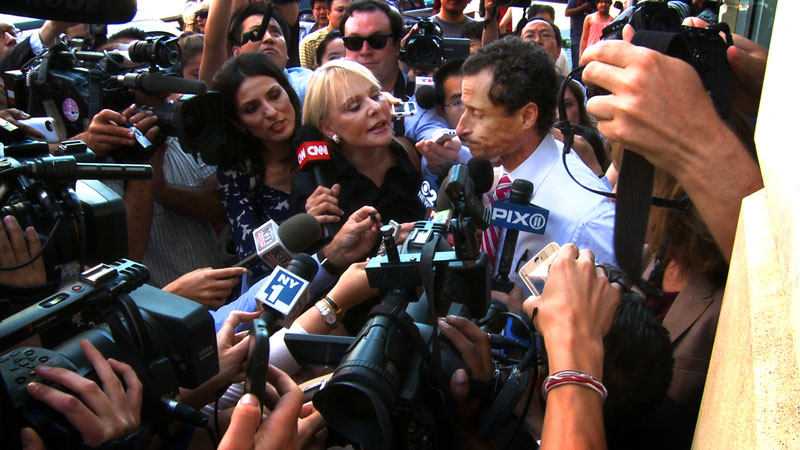 This eye-popping, jaw-dropping documentary about the 2013 New York City mayoral bid of sext-happy ex-Congressman Anthony Weiner may be the most fascinating and yet most frustrating movie you’ll see this year. It begs the question asked whenever a public figure orchestrates his own fall from grace: “What were you thinking?” In the case of this particular political animal, the query is a rhetorical one operating on two levels. Level No. 1: Despite his highly publicized resignation from the House of Representatives in 2011, triggered by the revelation of sexually explicit photographs on his public Twitter account, Weiner nevertheless decided to again run for office with full knowledge he had posted other dick pix under the porny pseudonym “Carlos Danger” after he exited Congress. Level No. 2: Even more mind-boggling, he requested filmmakers Kriegman and Steinberg to document his highly publicized “second chance” stump for mayor, fully cognizant of the possibility of the further exposure of his private parts. Sure enough, new damning photos soon go viral and the shitstorm hits the fan, giving the documentarians a story beyond their wildest dreams. Near the end of the movie, one of them asks Weiner (once again, a pop-culture punch line) why he allowed them to continue to film to the bitter end, long after the subversion of his original purpose. His answer reveals nothing and everything. Depending on how you look at it, this is either the stuff of high tragedy (hubris comes to mind) or low comedy (idiotic narcissism does as well).

No one else in this film comes off very well either, except for maybe the true-believers who staff the upended campaign and justly feel betrayed by their candidate. The feeding frenzy of media piranhas is unseemly, and the 23-year-old Las Vegas blackjack dealer to whom Weiner sent the photos comes off as more interested in cashing in on her five minutes of celebrity than any noble purpose of exposing hypocrisy. Even wife and longtime Hillary Clinton aide Huma Abedin doesn’t always appear sympathetic, although the personal attacks waged on her integrity for standing by (or at least, not abandoning) her man as the new scandal explodes are clearly rooted in a sexist double standard. Notwithstanding the damning narrative, you could argue Weiner rehabilitates the disgraced politician slightly, given its frequent reminders of his firebrand advocacy for the middle class and the occasional glimpse of a deeply flawed human being as he discusses his self-inflicted injuries on camera. Directors Kriegman and Steinberg have assembled a remarkable, one-of-a-kind look at human foible in the context of American politics in Weiner. It’s a movie from which you can’t look away, no matter how hard you may try. 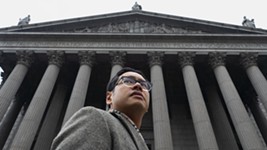