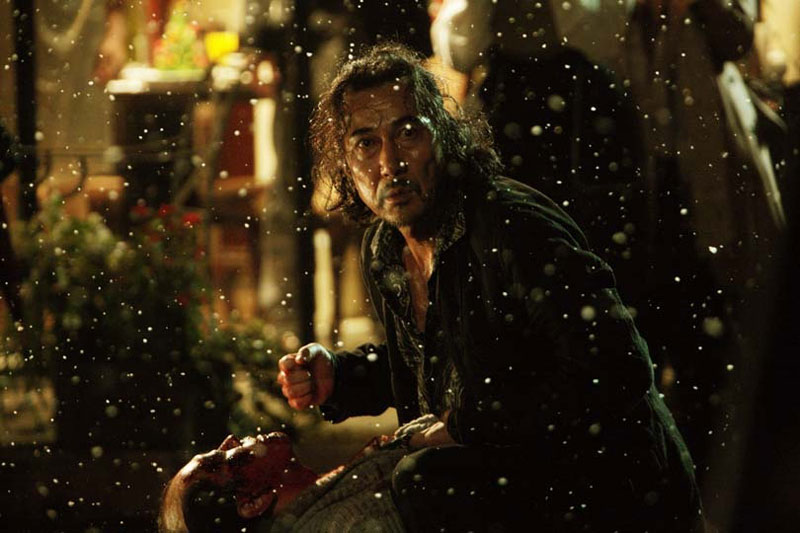 The seething, sweaty Yakusho (absolutely excellent here) is Akikazu Fujishima, an alcoholic, pill-popping ex-cop, deadbeat dad, and all-around human trainwreck. Fujishima staggers around the prefecture like a modern-day golem composed primarily of guilt, booze, and a vicious, hair-trigger temper. Cruising the garish nighttime streets in the world’s most unimpressive car, he backhands nearly every woman he encounters (having recently discovered his wife in bed with a bald milquetoast, he’s got female trouble and then some), and generally scores high on the mad and dangerous-to-know scale of cinematic sociopaths. Too brutal and self-loathing to be nailed as a true antihero, Fujishima instead radiates a greasy sort of bad karma that soils everything he touches, even when he’s trying to do the honorable thing.

His grim outlook only intensifies when he receives a call from his ex saying that their teenage daughter Kanako (Komatsu, a lovely cipher) has gone missing. Once a psycho cop, always a psycho cop, and so it goes with Fujishima, who rifles Kanako’s drawers – ahem – and finds a hidden cache of needles and pills. Suddenly concerned about someone other than himself, he mounts a one-man mission to find his daughter and send her corrupters to hell. Unsurprisingly, it all turns out to be orders of magnitude worse than anyone could have suspected.

Multiple seedy subplots and a disorienting, flashback-filled story mimic the raging, red whirlwind that is Fujishima’s brain. Helpfully, director Nakashima tags every new scene with a date and time, but what really sticks with you is the gutter-neon-drenched cinematography from Shôichi Atô, and Yoshiyuki Koike’s ADHD editing, both of which amplify the already out-of-control action onscreen. Nakashima goes so far as to employ random bits of cool blue animation and the occasional moment of unexpected empathy amidst the otherwise nonstop carnage. It’s a rush, albeit a dark and ever more disturbing one, kind of like taking some bad acid and mainlining Seijun Suzuki’s greatest hits while being battered about the face and neck by a gang of yakuza thugs rolling hard on equally awful ecstasy. Yeah, come to think of it, that’s The World of Kanako in a hyperviolent, nihilistic nutshell. (It’s got my nomination for “2015’s Best Title Sequence” to boot.)

A version of this review previously appeared as part of the Chronicle’s coverage of Fantastic Fest 2014.

Fantastic Fest 2014: The World of Kanako
Kids on the skids and one mad dad