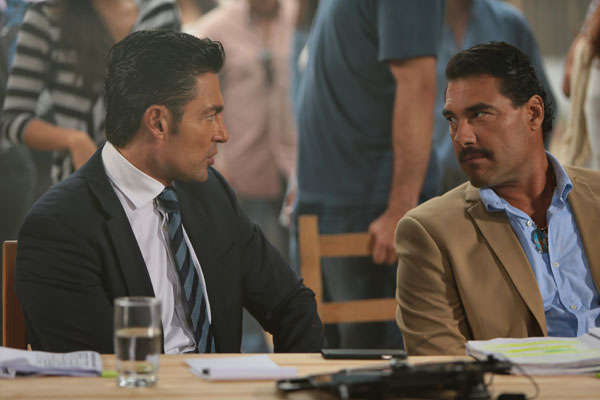 Ladrones is the sequel to the 2007 Mexican film Ladrón que Roba a Ladrón, which was quite successful among Spanish-speaking moviegoers in the U.S. upon its release. The first film told the story of modern-day Robin Hoods, Alejandro Toledo (Televisa star Colunga) and Emilio Lopez (Miguel Varoni), who brought down an infomercial mogul who was exploiting Latino immigrants. Afterward, Toledo turned to business, and Lopez (now called Sánchez) went to work for the FBI, but when a new injustice rears its head, the need for another caper becomes obvious. But since Sánchez is now a lawman, he recommends that Toledo pair up with Santiago Guzmán (telenovela heartthrob Yáñez) for this next heist, and thus a new team of Robin Hoods (and a sequel) is born.

The contentious Texas land disputes between the Mexican rancheros and the Anglo settlers, which have been ongoing since 1848, provide the historical backdrop of Ladrones. While gardening, a Mexican-American woman discovers the original land grant deeds her ancestor buried so many decades before. In short order, they are stolen from her home by agents of Miranda Kilroy (Lindsey), the descendant of the Anglo businessman who developed the area. Toledo and Guzmán come up with an elaborate plan, which uses the unique skills of all the swindled landowners, to steal back the deeds.

Much more a comedy than a heist film (think Ocean’s 11 rather than Casino or Rififi), Ladrones moves at a pretty entertaining pace and maintains a good sense of humor about itself. Menéndez directs and edits here, just as he did on Ladrón que Roba a Ladrón (the director’s extensive TV credits include several episodes of Robert Rodriguez’s From Dusk Till Dawn: The Series for the El Rey network). He manages a large assemblage of actors on this project yet keeps them in constant motion. He should have another hit on his hands with Ladrones. 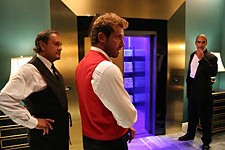