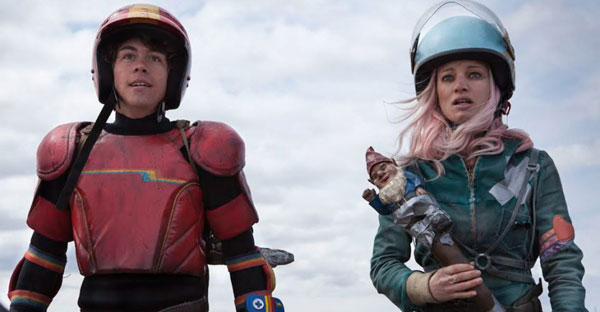 After making a slew of shorts during the past decade, Montreal film collective Roadkill Superstars (RKSS) finally drops their feature debut Turbo Kid, into which they stuff Eighties Mad Max rip-offs and youth-driven B-movies (Solarbabies, BMX Bandits) in a blender to create a satisfying (if blood-drenched) smoothie of awesomeness. Set in the postapocalyptic future of 1997 (the world ended in acid rain and robot wars, of course), our titular hero, known as the Kid (Chambers), is an orphan living in a fallout shelter, who spends his days scavenging for trinkets in the wasteland and trading them for water and comic books at the nearby settlement. One day, he stumbles upon Apple (Leboeuf), a quirkily enthusiastic girl with a secret. Their friendship is soon tested when she’s kidnapped by Zeus (Ironside, a mainstay of the Eighties films that Turbo Kid emulates), the overseer of that neck of the woods. Can the Kid become the reluctant hero and rescue the girl?

Working from a well-worn template, Turbo Kid nonetheless delivers on all fronts. The one-note characters you’ve seen a million times still surprise with solid performances and refreshing eccentricities thrown in for good measure. And the references, so many references! From Nintendo Power Gloves and The Legend of Zelda to Walkmans and View-Masters, the film is awash in tiny details and allusions that enhance (and more importantly, don’t detract from) the genuinely silly proceedings. Add to that a great synth-based soundtrack and campy, over-the-top carnage that hasn’t been seen since Troma’s heyday, and you have a love letter to a decade that eschews the meta/wink-wink component that mars most modern genre films. Sure, it wears its influences on its sleeve (a sleeve likely to be hacked off), but Turbo Kid has such sweetness and genuine love for the films it pays homage to that you can’t help but admire the filmmaking team for creating an irreverent throwback, an authentic homage that stays true to its roots. It’s a satire to be sure, but one that embraces its retro origins with an exuberance that is as much fun as it is nostalgic.