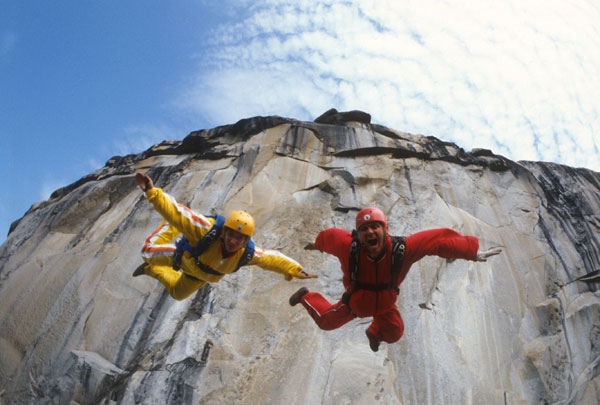 Regarded as the father of BASE jumping, Carl Boenish was a man whose knowledge, enthusiasm, and boundless energy make him an ideal and engaging subject in Marah Strauch’s documentary Sunshine Superman. Working as an electrical engineer for Hughes Aircraft in the late Sixties, Boenish’s hobby of parachuting out of airplanes led him to oversee the aerial photography on John Frankenheimer’s 1969 film The Gypsy Moths. That was all it took for Boenish to follow his dream full time, strapping cameras on his friends and himself, making short films of beautiful and breathtaking daredevilry.

The film portrays Boenish as an iconoclast with an almost childlike fascination with the world around him. Believing that the laws of nature supersede the laws of man, Boenish and his cadre of enthusiasts started jumping off El Capitan (a towering granite monolith in Yosemite National Park that you may recall from Ansel Adams’ photographs) at first surreptitiously, and then with the park rangers’ blessing, and then again in secret when the jump started to become more popular. That led Boenish and co. to seek other structures to jump from – skyscrapers, bridges, inside the Houston Astrodome – leading to the creation of BASE jumping (an acronym signifying building, antenna, span, and Earth). Since Boenish always had the camera rolling, Strauch has no shortage of beautiful (and vertigo-inducing) footage of people in primary-colored jumpsuits happily leaping off of various high-altitude objects, but she anchors the film with the presence of Boenish’s wife, Jean. Fiercely intelligent, and seemingly the yin to her husband’s yang, Jean had no qualms jumping out of an airplane during their courtship, and eloquently describes the ups and downs (no pun, I swear) of a relationship with a man driven by documenting the euphoria of the pure freedom of gravity and inspiring people that anything is possible, a journey she eagerly embraced. A couple of keystrokes will inform you of the tragic third act to Carl Boenish’s life, but I won’t dwell on it here, as it’s worth hearing from the people who lived it.

Sunshine Superman is at times a bit too reverent with the material, and there are distracting reenactments (à la The Jinx and Man on Wire), some of which seem extraneous, but overall, the film is a sun-kissed tribute to a singular individual. Carl Boenish embodied the spirit of a rebel, teacher, and trailblazer, whose passion and drive are reminiscent of a cross between Chuck Yeager and Timothy Leary. Climb up, suit on, jump off.

Phil Mayfield, BASE jumper and interview subject, will attend the 6pm show on Saturday and the 1:50pm show on Sunday for Q&As.