Neill Blomkamp certainly made a splash when his first feature District 9 aligned explosive spectacle, timely sociopolitical concerns, and a bit of the old ultraviolence on its unlikely path to an Academy Award nomination for Best Picture. Blomkamp’s much-anticipated follow-up Elysium broadened its scope from his native South Africa to nothing less than the entire world in its more ham-fisted allegory for universal health care. Now, with Chappie, the director/co-writer returns home for an uneven showcase of impeccable visual effects and lackluster emotional affect.

Near-future Johannesburg finds itself successfully policed by robotic scouts, thanks primarily to the efforts of developer Deon Wilson (Patel). He still quests after the achievement of artificial intelligence, and when he gets a chance to implement such a program on a damaged scout (soon dubbed Chappie), it’s only at the hands of three thugs – Ninja (Ninja), Yo-Landi (Visser), and Amerika (Cantillo) – desperate to gain their own robotic advantage against the system.

If something strikes you as strange beyond the plot’s plain debt to both RoboCop and Short Circuit (or rather, that one scene in the sequel where Johnny Five joins up with local gang Los Locos), it should be the central casting of Ninja and Visser, the formerly married members of South African rap duo Die Antwoord, as exaggerated versions of themselves. This goofy gambit might have been well-suited to a five-minute music video that teamed the group with a blinged-out gangster robot sidekick. This two-hour film happens to thrive most on the perfectly silly transformation of an advanced technology into a common criminal.

However, with Deon struggling to instill a proper sense of humanity in Chappie despite the self-serving protocols of Ninja and Visser and the watchful eye of rival engineer Vincent (Jackman, sporting a mullet and one-note zealotry), Chappie strains to lend something resembling gravitas to a fairly lightweight premise. Compared to most studio filmmakers, Blomkamp doesn’t lack for ideas, emphasizing equally the divide between crooks and cops as well as the case for nature vs. nurture, but these themes are treated with little more than lip service about the notions of consciousness and mortality.

Just as the main humans must treat the newly sentient Chappie like a child, Blomkamp remains heavy-handed in laying out Chappie’s outsider status to the audience (a storybook about black sheep comes into play; the character boasts a “Reject” label directly across its forehead). As such, it’s tempting to sell short the robot’s entirely convincing portrayal by D9 actor Sharlto Copley and a team of visual effects wizards. By the time our shrill antiheroes find their lives at stake, it may be hard to give much of a damn about the movie, but so long as “he” is on screen, it’s surprisingly easy to give a damn about the machine. 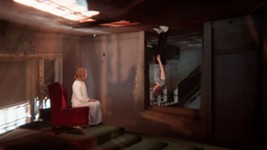 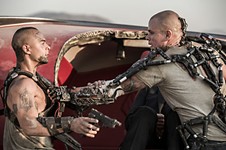