Director Michael Mann has proven to be the oddest stylist of his generation, starting with the stunning Thief, achieving velocity with Heat, and then following those by searching for a certain kind of pastel monotone. He made a number of films that were far better than they had to be (Ali and The Last of the Mohicans), but not as great as they seemed at first promise. It’s as though Mann backs down from the challenge or sees it set at very limited goals.

Blackhat plays a surprisingly flat and ever-flatter cinema texture against the careful roll-out of an elaborate plot. Not only is the pacing deliberate, but Mann often supplies only about 80% of the information needed to understand what is going on in a scene. This is never a problem; the film’s narrative strategy is so generic that what is going on is obvious. It does make the viewer aware that most films go all the way with this kind of information, explaining the action when they don’t really need to go so far.

A nuclear power plant in China is caused to malfunction and the price of soybean futures are manipulated. Obviously, there is some corrupt computer genius at work, planning to do great evil. Only thing is, the most eloquently crafted part of this rogue program was created by a jailed computer hacker in America. The film is international in scope and ambition: A Chinese police official tackles the case (Wang), bringing along his sysadmin sister (Tang) and getting his jailed ex-college roommate (Hemsworth) released to help him.

There is something appealing about the walking-under-water pacing of this film that’s anchored by a number of fine action set-pieces. But, as usual, Mann is uninterested in character, and while enamored of setting up as complicated a plot as possible, the filmmaker seems to have lost interest by the end.

There is such a richness and cinematic ambition to Mann’s best work that it’s a shame it is often undercut by what seems a real contempt for his audience. You can’t help but think that he feels as though he tosses out enough narrative and style ideas that he has no obligation to create believable relationships or offer satisfying resolutions. 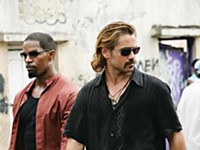 Miami Vice
Perhaps vice isn't what it used to be, or maybe Crockett and Tubbs don't belong in this new time slot, but Michael Mann's movie turns out to be dreary and monochromatic.