Angelina Jolie’s second outing as a director strives for epic inspiration, and, for the most part, achieves it. The film tells the story of the trials experienced by Louie Zamperini, a U.S. runner, who competed in the 1936 Olympics before joining the Air Force and having his plane crash-land, surviving 47 days at sea in a life raft, getting rescued by the Japanese, and spending the rest of the war shuttled between harsh POW camps. The story shows how one man who’s been subjected to grueling physical hardship and cruelties can overcome the immediacy of pain and torture and, in fact, emerge all the stronger for it. Unbroken is a story of grand heroism and paradigmatic inspiration.

The inspirational aspects of Unbroken, however, are not carried over into its craft. Unbroken is a fairly flawless product: epic in scope and imagery, and faultless in all matters of technique. Yet Jolie privileges reliable indicators of quality over idiosyncratic impulses toward creativity. Maybe that’s what it takes for a female director to find success making a war film: relying on more common denominators rather than personal touches. The cinematography by Roger Deakins conveys grandeur without personality, the score by Alexandre Desplat cues all the right emotions, and the screenplay alternately written by Joel and Ethan Coen, Richard LaGravenese, and William Nicholson (based on Laura Hillenbrand’s book) has been polished to a fine sheen. As Zamperini, Jack O’Connell is the film’s strongest asset. The actor holds our attention from beginning to end, making us care deeply about the man’s fate instead of becoming an empty icon of stoicism.

Stoicism is truly the key as there’s little in the movie that’s not directly related to Zamperini’s wartime experience of overcoming extreme mental anguish and assaults on his physical flesh. There are points at which Unbroken reminds us of Mel Gibson’s unbridled display of the mortification of the flesh in The Passion of the Christ. Flashbacks to Zamperini’s life before his military service provide us with the central clues to his fortitude. As a child in church, young Louie (C.J. Valleroy) is impressed with the words: Love thine enemy. Later, while his older brother (Russell) trains him to become the day’s “most successful track runner in high school history” he drives him onward with the slogan: “If you can take it, you can make it.” This is the guiding principal that Jolie’s movie wants to impart. 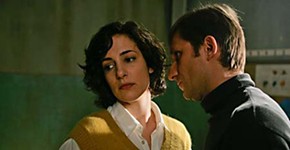 In the Land of Blood and Honey
Angelina Jolie steps behind the camera to helm this picture she also wrote, which focuses on the emotional fallout of the Bosnian War.